Where The Grass is Greener: Urban Green Spaces in Tokyo

In recent years, we have been witnessing Tokyo transform into an increasing macroscale metropolis where shopping mall complexes have become the new structural landmarks.  Decades ago the American-influenced concept of a shopping mall was quite rare in Japan as the country catered largely to department stores and independent boutiques. Soon, outlets began to sprout as well, especially in the suburbs, such as the Gotemba Premium Outlet, between Tokyo and Hakone. The more urban the city becomes though, the more we crave green spaces in Tokyo.

From the late 1990s and 2000, almost every district in Tokyo has erected its own distinct commercial complex and many of them have been trying to incorporate nature as much as possible. The novel perspective of shopping has expanded not only towards retail, dining, and entertainment, but also towards green spaces that provide a dynamic balance between commercial structures and the natural environment. Let’s take a look at four urban green spaces in Tokyo that offer an oasis in the middle of the metropolis. Daikanyama has been known as “little Aoyama” with its maze of small and posh boutiques, and trendy restaurants and cafés. Being only one stop from Shibuya on the Toyoko line, the area is certainly a pleasant alternative for avoiding the congestion in Shibuya. Taking the south exit of Daikanyama station, you’ll reach LogRoad Daikanyama, a rather new complex of wooden cottage-style shops and restaurants that has been redeveloped in 2015. This is where originally the railroad tracks of the Toyoko line were when the line between Shibuya and Daikanyama was first envisioned to run above the ground instead of underground. Today, the 3,200 square meters of land are turned in a charming corridor lined with greenery, terraces, benches, and five retail buildings. Designed by architect Shin Ohori and brand consultant Yoko Shibata, the space is intended to “grow with the Daikanyama neighborhood” instead of merely erecting fancy shops that could disappear in the long-run.

LogRoad opens with  Spring Valley Brewery, Kirin Brewery’s flagship store and restaurant that offers six types of craft beer and other limited edition beers. The other buildings include Sneakernstuff (SNS), sneakers and streetwear shop that also has a terrace cafe, SNS Café Tokyo and a stylish yellow delivery truck parked along the road. You can also stop for body maintenance exercises at Teddy’s Balance. Further to the end of the road, another cozy terrace café and restaurant, Garden House Crafts serves healthy sandwiches and refreshing beverages. As the location is quite secluded from the main shopping area of Daikanyama, LogRoad exudes a truly relaxing and quiet atmosphere amidst the green surrounding. 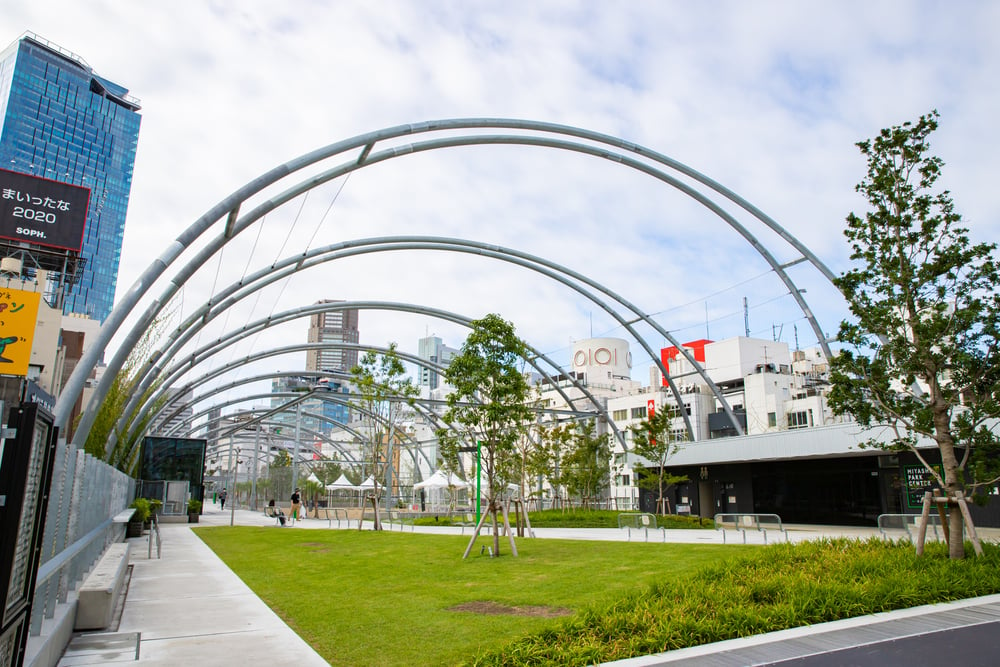 In response particularly to the announcement of the 2020 Tokyo Olympics, Shibuya has been undergoing remarkable changes. Apart from the newly constructed Shibuya Stream (2018), Shibuya Scramble Square and Shibuya Sky (2019), Shibuya Fukuras (2019), and the new Shibuya PARCO (2019), the Miyashita Park, a project of Mitsui Fudosan Co., Ltd. and Shibuya City Office opened in 2020. This was a major makeover since its former days of being a plain playground park where office workers paused for a lunch break or lovers cooed during evenings and weekends.

Now, a commercial complex of restaurants, brand retail shops, entertainment, a rooftop garden, and a hotel, Miyashita Park has become one of the hippest hangouts for the youth. Its rooftop garden covers 10,000 square meters and is evenly landscaped on the South and North blocks, connected by a walkway. In the South block, you can find a skating park, a wall climbing area, a multipurpose sports facility, and a sand court for “beach” volleyball, while in the North block, there is an open lawn and a café. There is also an observation tower between the two blocks. The total lawn area covers 1,000 square meters, which provides ample space for a promenade and leisure for families amidst the scattered trees. A canopy of numerous plant varieties adds to the enrichment of the natural surroundings while providing shade, especially in summer. All of this in the buzzing heart of Shibuya, which makes Miyashita one of the most popular urban green spaces in Tokyo. Another commercial building in the heart of Tokyo that boasts a spacious and beautifully landscaped rooftop garden is the Ginza Six shopping mall. Here once stood the famed Matsuzakaya Department Store, but in its place, the modern and sophisticated shopping mall with over 240 brand shops was redeveloped in 2017. On the 13th floor, the rooftop garden, called Ginza Sky Grove, covers 4,000 square meters and is considered the largest roof garden in the Ginza district. It is free and open to everyone, even though it is a luxury to have so much space in Tokyo’s most expensive land. This rooftop garden is comprised of four zones: forest zone, basin zone, lawn zone, and the open plaza for multipurpose activities.

The forest zone is located on the west side, with elevated platforms and lush trees and plants surrounding them—azaleas, hydrangeas, maples, oaks, quince, pine trees, and others. Flat surfaces of water and grass in the basin zone blend with the overall landscape. In the inner alcoves are walls of hanging plants that allow cool circulation especially in the warm seasons. A special characteristic of this garden is the incorporation of the traditional Japanese garden culture of the Edo era and the Western touch reflecting the avant-garde design of the building. A pair of cherry blossom trees on the north side and maple trees on the south side, plus a small shrine with a plate of Matsuzakaya’s history usher in the Japanese spirit. While taking a stroll around the rooftop, you can enjoy a full 360-degree panoramic view of Tokyo’s landmarks, such as the Tokyo Tower, and skyscrapers in Shiodome and Toranomon. Among all the green spaces in Tokyo, this one probably has the most iconic view. Just next to Shibuya on Ikejiri Ohashi Station on the Denentoshi line, Meguro Sky Garden sits above the roof of the Ohashi Junction on the Metropolitan Expressway. What probably makes it a secret among all the other urban green spaces in Tokyo is the access to it. It can be reached by a walkway on the fifth floor of Prism Tower or the ninth floor of Cross Air Tower. With an area of 7,000 square meters, the unique loop-shaped layout of the garden has earned numerous awards from the Ministry of Land, Infrastructure, Transport and Tourism, Civil Engineering Society, and the Good Design Award. The project aimed to promote environmental conservation and to play a role as a base for ecological networks, since the fusion of a motorway and a park facility has never been seen before.

From the East Exit Square you can almost see Mt. Fuji through the red pines from the observatory deck. As you take a promenade around the loop on different levels, you are surrounded by terraced fields of flowers from north to south, a play area on a curved artificial hill, and a relaxing open space revealing a traditional Japanese garden and a tailored black pine tree. There is also a tunnel of miscellaneous trees and a bright flower plaza called the Moisture Forest. On the West Exit Square, a maple tree blooms with beautiful autumn colors that provide a pleasant shade to the open square. There is also a bamboo grove taken from the bamboo shoot cultivation that was once popular in Meguro. You can pause for a light meal and drinks, to read, or simply bathe in sunlight on one of the many benches.

These are four of many urban green spaces in Tokyo. Both residents and visitors who have always regarded the city as an overflowing concrete jungle are often pleasantly surprised by the pockets of greenery they find. Small green corridors between buildings and rooftop gardens have become Tokyo’s new infrastructure concept for preserving as much green space as possible even in a dense city where every square meter of space is used.

note: all photos except for Miyashita Park by Alma Reyes