Once the coolest neighborhood in town, Daikanyama has weathered stiff competition in recent years with many newcomers vying for its crown

The warren of streets where expensive fashion boutiques rub shoulders with more affordable brands such as A.P.C. and eclectic places such as Hollywood Ranch Market are undoubtedly what draws the majority of people to Daikanyama. Pop into Okura for some traditional indigo-dyed garments and accessories before heading down into the basement to Bombay Bazar and grabbing a delicious organic lunch. There are plenty of other cafés and burger joints dotted around too. King George Sandwich Bar is a popular destination due to its generously filled, healthy sandwiches and delicious smoothies, as is Henry’s Burger. The tiny restaurant keeps things simple with only three burger options on the menu: single, double or triple. No need for gimmicks or variety when the beef is done this well. If you’re in the mood for something more high-end, stop by the Michelin-starred Italian restaurant Ristorante Aso. Sharing the grounds of Daikanyama Hillside Terrace (a multipurpose complex home to a mix of stores, restaurants, art galleries and offices that was built up gradually between 1967 and 1992) is the former residence of local politician Torajiro Asakura, the Kyu Asakura House. Built in 1919 during the Taisho era, it survived the Great Kanto Earthquake and Second World War air raids and has been recognized as an Important Cultural Property. For a mere ¥100 visitors can enter the garden and explore the complex layout of the house – the creaky wooden floors, immaculately preserved tatami rooms and swathes of natural light spilling into the residence, create a wonderful sense of history. The large conference room on the first floor has seating looking out onto the beautiful scenery, perfect for taking a moment of peaceful reflection. The mossy, tree-laden garden is built on a slope with a winding, stone pathway following the cliff line and cutting through the abundant plant life which, as you’d expect, come alive during the spring and autumn months. T Is for Trendy

One of the biggest changes to the area in recent years arrived in 2011 with the award-winning Daikanyama T-Site – three interlinked buildings adorned with lattices of interlocking Ts (for Tsutaya) – designed by celebrated local architects Klein Dytham (also behind the renovated Roppongi Tsutaya Books, see page 52). There’s a good selection of English titles amongst the plethora of books and magazines (both old and new), as well as Tsutaya’s main fare of music and movies. Take a selection upstairs to the Anjin Library & Lounge and browse through them while sipping on a coffee (or something stronger). The library also contains a wealth of antique magazines and features a fabulous nine-meter-long piece of artwork by Masatake Kouzaki. Elsewhere on the site, dog owners will be pleased to note that the adjacent Ivy Place has a pooch-friendly terrace and there’s also a small dog park in front of the Green Dog Daikanyama pet store. Another symbol of regeneration is Log Road Daikanyama. The relaxing shopping street consists of a cluster of low-rise red cedar buildings, benches and lush greenery built on top of what were once the railway tracks for the Tokyu Line (they were moved underground in an efficient feat of engineering in 2013). At one end of the road lies Spring Valley Brewery Tokyo. Housed in a renovated warehouse, the lofty lodgings of the Kirin-owned craft beer brewery creates an airy atmosphere in which to sample all six of its on-tap lineup, along with a tasty selection of recommended grub to pair with each brew. For a hillside view across Nakameguro, take a stroll around Saigoyama Park, a popular cherry blossom viewing spot. For a more swanky setting, head to the ninth-floor Mexican eatery Hacienda del Cielo (which translates as “A place in the sky”). The aptly named restaurant features floor-to-ceiling windows and an expansive, stunning terrace for taking in superb views across the city while feasting on fajitas and washing them down with chili-laced Cajun martinis. 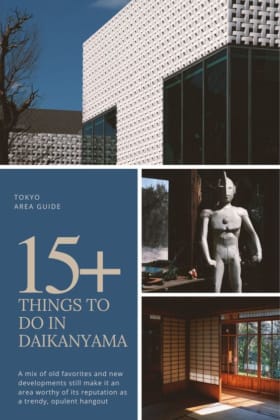