Only a short flight away from Chofu Airport, Kozushima is the laidback getaway you've been yearning for

An idyllic Island shrouded in mystery and legend, Kozushima is a delightful destination off the beaten track that is ideal for a short getaway. Boasting flawless white sand beaches, pristine spring water, sumptuous seafood and stunning mountain views, it’s a place worth visiting any time of year including the winter when the cold air holds less hazy moisture making the nighttime that much clearer to gaze in wonder at the stars. Last year the entire 18.58㎢ area of Kozushima Village was certified as Tokyo’s first International Dark Sky Park, a remarkable achievement that will no doubt attract more travelers to the region to experience the wonders of the cosmos. Experience Life in the Slow Lane

Despite being one of Tokyo’s 11 “Treasure Islands” (there are actually 219 Tokyo islands, 11 of which are inhabited), Kozushima feels like it’s a million miles from the hustle and bustle of life in the capital. In fact, it’s 180 km away – a 40-minute plane ride or about a three-and-a-half-hour high-speed jet ferry journey – from the mainland. We opted for the former, flying out from Chofu Airport on a 19-capacity Dornier Do 228 with propellers, which in itself felt like an adventure. Down below the glorious sight of Tokyo with Mt. Fuji in the background looked especially mesmerizing.

Stepping off the plane, it was as if we’d been transported back in time to a period when life was slower and gentler. Yet while it is very remote and void of crowds (the population is just under 2,000), there’s still lots to do. After renting a car, our first stop was Maehama Beach, an 800-meter stretch of white sand and cobalt blue water that we had entirely to ourselves. The Legend of Water Sharing

As well as being a great location to engage in marine activities and a pleasant early-evening stroll, Maehama’s also a place where you can feel the presence of Gods. On the beachfront is the “Mizukubari” (Water Distribution) monument with seven impressive-looking statues representing deities of the Izu Islands who had a meeting in Kozushima to discuss what they should do with the region’s water.

According to folklore they assembled on Mt. Tenjo, a mountain with various ponds brimming with water that served as the source of life in the region. It was here where they agreed to share the water out on a first-come, first-served basis with one God turning up late due to a heavy night of drinking. Furious at missing out on a good supply, he jumped in the pond in a fit of rage, scattering the water in various directions. It resulted in an onset of various springs that welled up throughout Kozushima. It’s not just the “Mizu Kubari Densetsu” (Water Sharing Legend) that attracts visitors to the island, but also the actual water itself. Pure and healthy, it helps to give locally made beverages, including beer and shochu, their smooth finish. It’s considered one of the top water destinations in the country and after sampling some, it was easy to understand why. It just tasted that much fresher and crisper than what we were used to in mainland Tokyo.

Our first taste came from Tako Spring hidden away in corner of Tako Bay, a tranquil and scenic spot on the southeastern side of the island which is a great place for taking pictures (particularly from the elevated observation point). The magnificent landscape includes a white sand beach which provides a wonderful contrast to the obsidian-layered cliffs of Mt. Tenjo.

A dark natural glass formed when rhyolitic magma rapidly cools, obsidian was one of humankind’s most sought-after materials tens of thousands of years ago, used to make essential items such as knives and the points of spears. It can now only be found in a handful of places in Japan making Kozushima a popular destination for geologists to visit. After a mouth-watering sashimi lunch at the Yocchare Center near Maehama Beach, it was then time for a quick chat with third-generation fisherman Hironari Shimizu who’d just returned from a 10-hour shift on the water with his younger brother. They were out on the boat before sunrise to catch kinmedai, known as splendid alfonsino or golden eye snapper in English. These unique fish reside between 400 and 600 meters below the surface so in order to catch them, the Shimizus must consider several factors including distance from the shore, tide flow and the position of the boat.

“Kinmedai has become very popular in recent years,” says Shimizu. “I believe one of the reasons for this is that Kozushima has established rules for fishing and has worked hard to ensure a stable supply of fresh fish. We use squid or mackerel as bait with an electric reel and a stick that has 50 needles at the end of it to make sure we catch only an appropriate amount. There are a variety of options to catch around the sea of Kozushima but we have to protect the marine ecosystem and that means not overfishing.”

The kinmedai are then loaded on to the brothers’ van and taken to Maehama Port where they’re sorted into different sizes ready for the auction late in the afternoon. There’s nothing like the commotion you see at the fish market in Toyosu. Here it is much quieter with buyers writing their bids down on paper rather than shouting them out. It was interesting to see the contrast and to get a flavor of what the fishing industry, which represents more than 10 percent of Kozushima’s total workforce, is like on the island.

Once the auction was over, we were just in time to see the sunset at Maehama Beach before heading to our ryokan to enjoy some of the island’s famous kinmedai along with deep-fried goatfish (referred to as “ojisan” – “uncle” in Japanese) and a fantastic selection of the freshest vegetables. It was a feast fit for kings.

Starry, Starry Night: Immerse Yourself in the Depths of the Galaxy

After dinner we ventured outside again for an evening of stargazing with our guide Wataru Furuya. This was unquestionably one of the highlights of the tour. There are many alluring stargazing spots in the region, including some with an ocean view. We settled for a quiet deserted park that was just a short distance from the residential area of the island. Initially it looked like we’d picked the wrong night to go, but then the clouds started to clear, and we spent the next couple of hours looking up at the sky’s universal beauty.

A night sky filled with visible stars and galaxies truly is a sight to behold. While this is something previous generations would have expected to see wherever they were located, for much of the world’s population today it’s a rarity to get such an illuminating view, even for those living in rural regions. This is due to light pollution, which is not only blocking our view of the universe but also disrupting wildlife, impacting on human health and proving to be a waste of money and energy.

Attempting to address these issues is the International Dark-Sky Association (IDA). In 2001, they created a certification program called the International Dark Sky Places (IDSP) which has taken extensive steps to protect the night sky’s natural beauty. Kozushima recently became the second place in Japan to be certified by the IDA as a Starry Sky Protection Zone after Iriomote Ishigaki National Park in Okinawa Prefecture.

You can hear immense pride in Furuya’s voice as he talks to us about the certificate. An astronomy expert who is passionate about the island, it’s fascinating to hear him speak as he points out the milky way and other features of the solar system using his LED torchlight. The in-depth knowledge he provides adds to the stargazing experience. 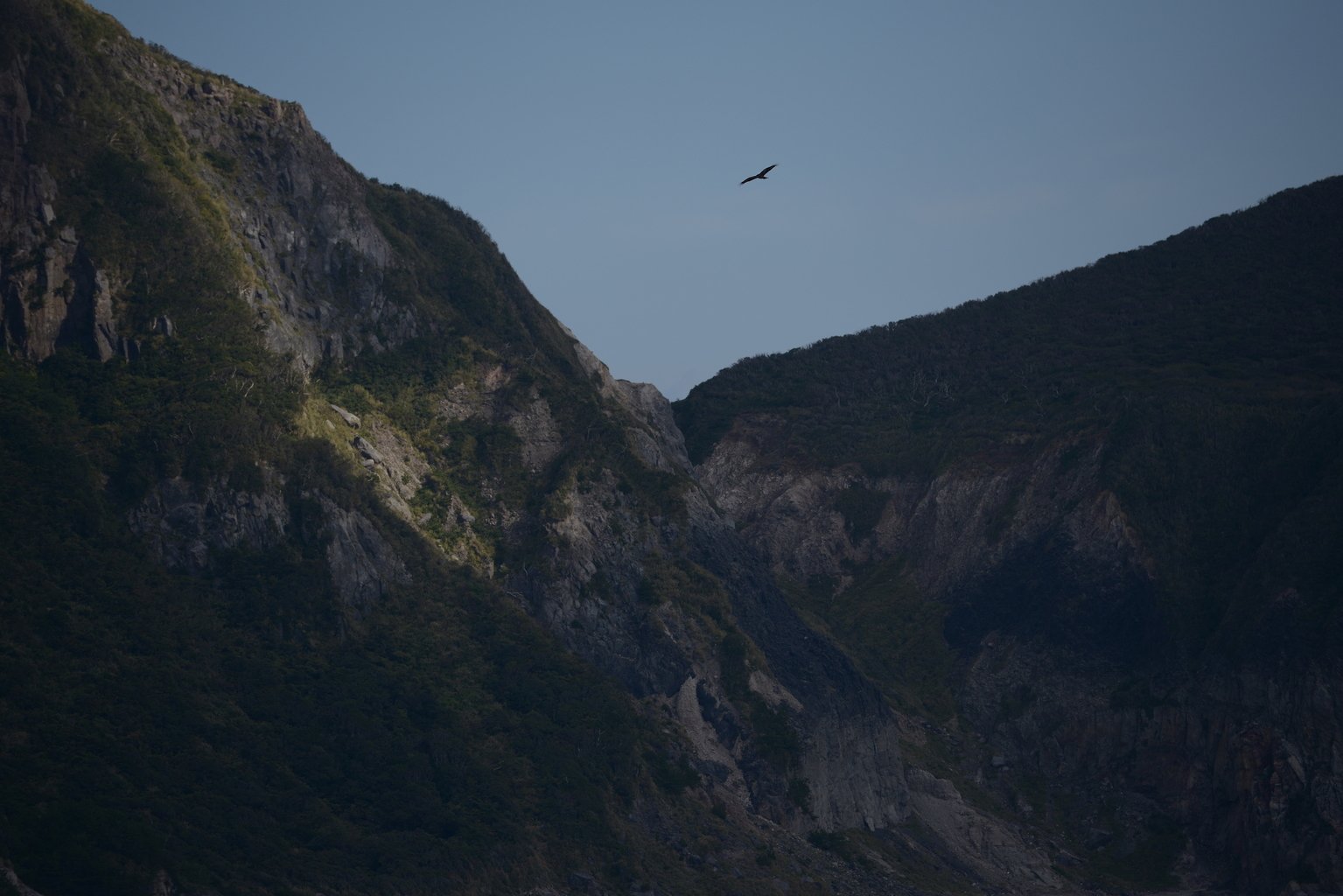 Trekking up the God Gathering Mountain of Tenjo

The next morning Furuya was once again our guide for a trek up Mt. Tenjo: A 572-meter-high volcano that reportedly last erupted in the 9th century AD. Taking around three and a half hours, it’s not the most difficult of climbs but it’s certainly an interesting one. After driving to the sixth station, we set out to reach the peak on foot along the volcanic terrain, encountering ponds, deserts, an imposing crater and flowers unique to the island as we walked.

Known as the “Japanese Alps of the Pacific” and the “mountain of 100 flowers,” Tenjo-san is particularly beautiful in the spring when the azaleas are in full bloom. One of the best places to see greenery is at Omote-Sabaku which is home to several plants. The other desert on the island is Ura-sabaku, an intriguing spot made up of white sand punctuated by rocky protrusions.

The most sacred spot on the mountain is Hairanaigasawa. Previously a swamp, it is where the Gods were said to have met to discuss the allocation of water. We then just had a little bit further to go to reach the top. The scene down below was breathtaking, and it came as no surprise to hear that it was listed on the “new 100 best views of Tokyo”. The number one tourist attraction on the island is probably Akasaki Promenade with its network of wooden walkways built over a gentle inlet. This place can get rather crowded in the summer when people like to jump off the diving boards or go snorkeling, so it was nice to pay a visit there in the winter and just have a stroll around while avoiding large groups.

From the beaches and ports to the delightful Monoiminamikoto Shrine and its mysterious trees, everywhere we went on the island was quiet and peaceful. The only disappointment about the trip was that we didn’t have time to enjoy an onsen. The outdoor mixed gender bath (which requires swimwear) apparently has an amazing view of the ocean and is also said to be the most relaxing way to see the stars. For more things to do in Kozushima, see their website here.

All photos by @markoxley_photography unless otherwise stated.