A Guide to Plum Blossom Season in Tokyo

Come February in Japan, most people have had enough of winter and are already daydreaming about lying on a blanket under a canopy of sakura. The 2022 cherry blossom forecast is live, the konbini fridge is stockpiling chuhai, and you’re ready to go. But before you get ahead of yourself, it’s time to stop and appreciate sakura’s often overlooked sister – the beautiful, elegant plum blossom.

The Origins and Symbolism of the Japanese Plum Tree

Prunus mume, also known as Chinese plum or Japanese apricot, but most commonly called plum blossom or ume, is a flowering tree that blooms in late winter (within East Asia). While cherry blossoms might be synonymous with the more apparent change of seasons, coinciding with the fresh start of the Japanese school year, it’s actually the plum blossom that yields the mighty title of “showing the first signs of spring.” Originating in China, the tree is often depicted in art and poetry, its delicate white, pink and red flowers breaking through a wintry scene in optimistic defiance of the elements.

Ume vs. Sakura: What’s the Difference Between Plum and Cherry Blossoms?

Cherry trees flower later than plum trees (around mid-March), but aside from this obvious difference, there are many other qualities that set the trees apart from each other. An easy identifier is the color of the leaves: cherry trees have green leaves while the majority of plum trees have darker, purplish leaves, usually unfolded and slightly rolled up. While both have several varieties with subtle variations in color, petal shape and bark, the most common plum flowers have only five petals (the weeping variety is an exception).

On a plum tree, one of its round-shaped buds will bloom into a single flower, whilst cherry blossoms may yield multiple flowers from a single oval-shaped bud. Plum flowers are also round and appear firmer compared to the soft, slightly drooping sakura petals growing on a longer stem. The greyish bark of a cherry blossom tree can often be recognized by horizontal markings around the trunk, while plum trees give off a distinct but subtle, sweet ume aroma. While many of the plum trees these days are merely ornamental, those bearing fruit will fully ripen in June and July, and are harvested to make various plum-based consumables. Umeshu (plum wine) is probably the most popular, made by steeping green plums in shochu, while umeboshi (pictured above) is a sour pickled plum commonly found in bento boxes and rice balls or eaten dried as a snack. In the run-up to spring all the way through hanami season, the ume tie-ins hit the stores in the form of questionable plum flavor beverages and a plethora of seriously tasty sour plum flavor potato chips – don’t knock them until you’ve tried them!

Where to See the Best Plum Blossoms in Tokyo

In pre-Covid times, it would be simple to enjoy the blossoms in one of the many ume matsuri usually held around Tokyo. With the current quasi-state of emergency in Tokyo, we recommend looking for plum trees around your neighborhoods or local parks and still take the time to enjoy this first sign of spring in Japan. 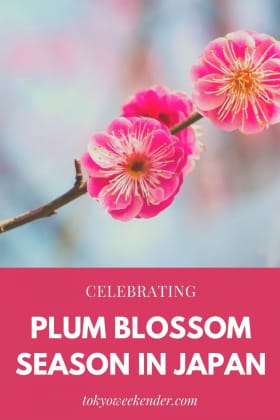