Shikoku Travel
TOPTravelThe Streets of Kochi: So Many Personalities The Streets of Kochi: So Many Personalities

Kochi, on the southern coast of Shikoku — the smallest of Japan’s four major islands — is young, as Japanese cities go. The city was founded in 1601 when Lord Yamauchi Kazutoyo decided to build his castle at the confluence of two major rivers before they flow into the Pacific Ocean.

For more than three and a half centuries, the castle and its administrative role for the region dominated the business of the city. The castle and various aspects of that influence remain to this day. But there is much more to Kochi than just its status as a former castle town. The best way to get a feel for the modern city is to explore its streets. Kochi has a number of street markets across the city, each occurring on a different day of the week. There is a Tuesday market in Kochi’s Kamimachi neighborhood. On Thursdays,  the market is held in the Honmachi neighborhood south of Kochi Castle, on the road leading to the Yamauchi Family Residence, the 19th century villa of the castle lords, now a museum. The Friday market is alongside the JR Dosa train tracks in the Kotobukicho neighborhood. All of these are morning farmer’s markets of fresh produce, along with some homemade foodstuffs, including bread and cakes.

The queen of Kochi’s street markets is the Sunday Market (Nichiyo-ichi) with a history of more than three hundred years. The market stretches for several blocks from the main gate of Kochi Castle every Sunday from sunrise until 6 pm. Like Kochi’s other street markets, the Sunday market has lots of local fresh produce. The Kochi area is particularly known for its citrus, especially the sweet-tart Yuzu and its thick-skinned cousin, Buntan (Pomelo). In season, both appear at this market in abundance. In the autumn, ginger and shiitake are also plentiful.

The vendors are friendly and happy to try to strike up a conversation. Those selling street food love to chat while they flip skewers of chicken chunks slow-roasting over coals or deftly wrap a savory griddle cake topped with a bit of cheese onto a single disposable chopstick — perfect for eating while walking through the market. The market is not limited to local produce. Plants, modern and traditional handicraft items, freshly baked bread, locally made jams and sauces; it’s all here usually sold by the maker, who will happily tell you all about their work. It’s a warm, yet lively atmosphere.

Near the castle are several small antique shops that also take advantage of the street market to bring out lots of their inventory, further adding to the fun and interest of this market.

The Sunday Market finishes at the Hasuikemachi-dori stop of the streetcar line that runs from Kochi Station south. 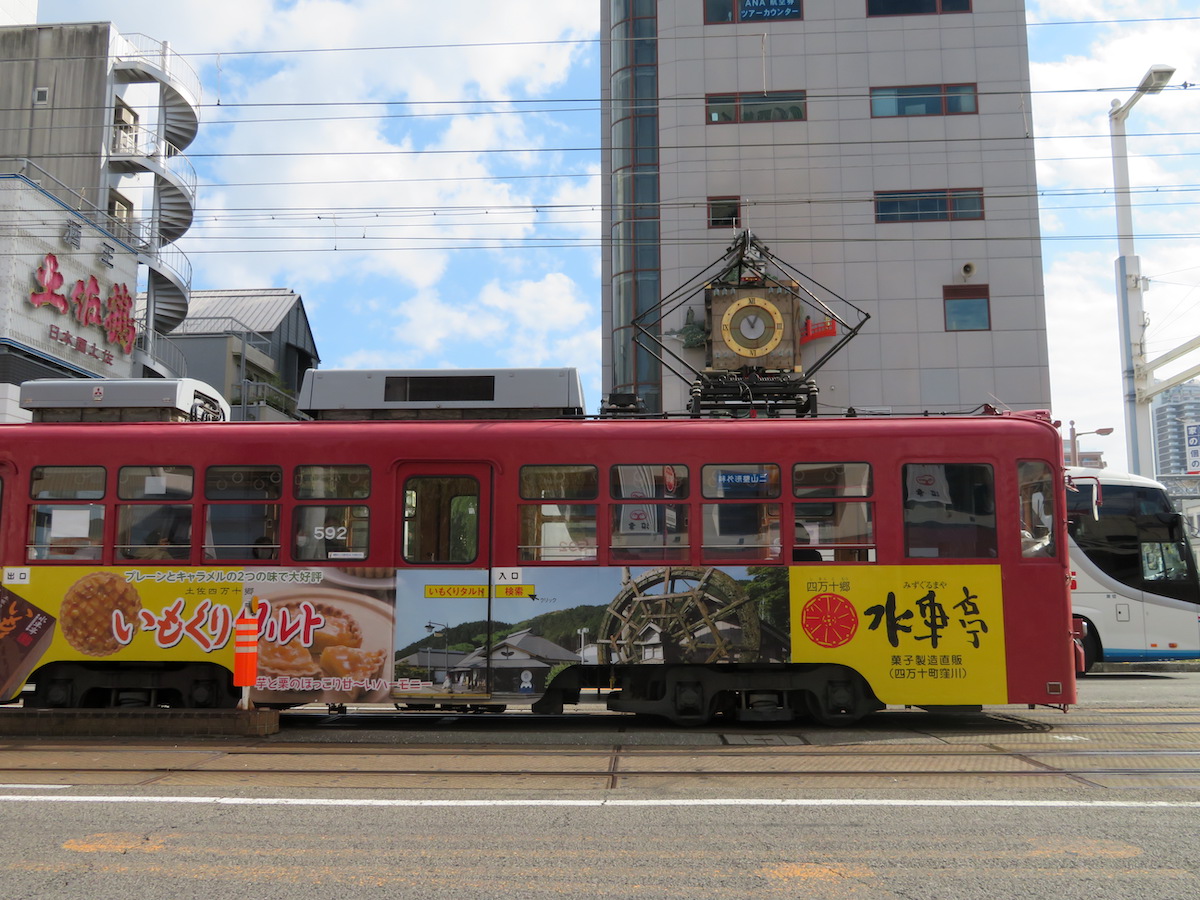 Kochi is home to Japan’s oldest streetcar service, running since 1904. While many cities abandoned their streetcars in the latter half of the 20th century in favor of running busses or building subways, Kochi still has three streetcar lines running a total of 25.3 kilometers across the city. It is the second-largest remaining streetcar network in Japan, carrying Kochi’s residents, locally known as “Kochi-jin,” around the city.

The cars running on the line are a combination of modern ones and their retro cousins. It’s difficult to say which is more fun to ride in.

The line also owns a number of vintage cars from different European cities that it runs on the tracks for special-order events, even dinner parties. While it must be fun for the diners, it’s also fun for others to see these cars merrily toodling along the streets of Kochi filled with revelers. Like most cities in Japan, Kochi has a number of covered shopping streets, which the locals call “arcades.”  Best known is the Harimayabashi Arcade, a broad tile-covered street closed to cars where shoppers can drift in and out of all manner of shops.

At one end, the arcade is anchored by the Hirome Market, a combination of indoor market and informal eateries in style seen more often in Southeast Asia than in Japan. Diners can find an amazing variety of traditional Japanese food as well as Western and ethnic dishes.

At the other end of Harimayabashi Arcade stands the Kochi Yosakoi Museum, dedicated to Kochi’s special festive street dance. Yosakoi originated in Kochi in 1954 as a means of promoting post-war economic recovery. It is a lively dance featuring a combination of traditional Japanese festival dance and modern elements.

Yosakoi is intended to be performed by groups. Each group develops its own colorful costumes and its own dance steps, set to its own music. There are only three rules:

While Yosakoi dancing seems to be ubiquitous in Kochi festivals, either featuring in the festival’s parade or as performances on stage, it is also growing in popularity across Japan and around the world. Every year in mid-August Kochi hosts a three-day festival, inviting Yosakoi groups from all over to participate in the parade through Kochi’s arcades and a dance competition. Visitors can learn more at the museum, see a display of some of the most colorful costumes from past events, and even try Yosakoi dancing for themselves.

The Harimayabashi Arcade takes its name from Harimaya Bridge, another distinctive feature of Kochi’s streets. This little arched red bridge is associated with a legend of star-crossed lovers. In the 18th century a Buddhist monk from nearby Chikurinji Temple fell in love with a tinker’s daughter.

This was a time when monks were forbidden to have relationships with women, forcing the pair to keep their love secret. But the monk was observed buying a decorative hair comb for his lover near Harimaya Bridge, exposing the affair and resulting in the monk’s banishment. The story is commemorated by the reconstructed bridge and has also been immortalized in part of the lyrics to the Yosakoi Naruko Dancing song. Thanks to the legend, hair combs and sweets shaped like hair combs are popular souvenirs sold in shops near the bridge.

The bridge gained further fame by being featured in a 2009 indie film, The Harimaya Bridge, telling the story of an African-American father filled with hatred of Japan who confronts his emotions when traveling to Kochi after his son died there.

Skillfully combining traditional, modern, tranquility and livelihood, there are many facets to Kochi’s streets and beyond that deserve to be explored and savored. When it’s safe to travel again, keep Kochi in mind.

There are multiple flights per day between Tokyo and Kochi Ryoma Airport. Flight duration is 90 minutes. Those preferring the travel by train can take the JR Tokaido/Sanyo Shinkansen from Tokyo to Okayama (3.5 hours) and transfer to a JR Nanpu limited express train for Kochi (2.5 hours).