TW Asked, You Answered: What Japanese Food Are You Most Reluctant To Try?

Japan is known as a country filled to the brim with the weird and wonderful, and while tiny trains that traverse mountain tracks, peculiar festivals and oddly flavored ice creams are impressive, there are some lines that even the bravest traveler to Japan won’t cross. Japanese cuisine is delicious, from onigiri to ramen and everything in between — it’s no secret that there is a treasure trove of joys to be found here to anyone willing to sink their teeth into the unknown. But as every avid treasure hunter knows, the search for treasures can occasionally lead to traps, and for the culinary adventurous, some of these traps have proven to be more terrifying than others.

What Japanese food are you most reluctant to try?

This month we round up some of the food that you, the Tokyo Weekender readers, are most reluctant to try, as you told us in our latest “TW Asked” post on Facebook. The comments kept coming through and there were some really gross stuff we’d gladly stay away from. So here they are, the top five — from best to worst (take that how you like) — Japanese foods you are most reluctant to try. Unsurprisingly, raw eggs made it to the top five. In the west, we were taught since childhood about the dangers of raw eggs and the illnesses eating one could potentially pass onto you, so to travel to Japan and find that a typical breakfast consists of a piping hot bowl of rice and a raw egg, would be shocking to many. But eggs that can be eaten raw undergo a different process to get them to store ready — these eggs are thoroughly washed and processed and although the chance of catching salmonella from them isn’t exactly zero, in general, there’s little to worry about even if you get this served for your first breakfast in Japan. The slightly slimy texture of a raw egg isn’t for everyone, but it’s something we believe everyone should try just once — if not only to brag to your friends back home that you did.

Raw egg yolks are also used as a side for dipping for various Japanese izakaya foods such as tsukune, certain types of yakitori and is occasionally even spotted on top of a wild beef bowl. Tori sashimi, or raw chicken, is a more understandable item on this list. While most are reluctant to try raw eggs because of the perceived salmonella which might accompany it, the fear of eating raw chicken has been more deeply drilled into our psyche since childhood. From talks on cross-contamination to advertisement campaigns on making sure “your chicken is cooked all the way through,” coming to Japan and consuming a boiled and slightly seared piece of chicken that is oh-so-pink in the middle, gives all raised in the west reason for pause. The raw chicken is usually, as mentioned before, slightly seared on the outside and served with a few sauces for dipped, usually soy sauce, a yuzu kosho or ponzu. Just so you know, the dish is rather delicious and a great addition to any izakaya spread if one can overcome the mental block. When made and prepared correctly, this dish is definitely worth a try and gets my personal stamp of approval. While the previous two items are foods that many of us grew up knowing, but have just been prepared in a way we don’t recognize, this one is something that we are not accustomed to at all.

This is a dish that is still served in elementary school lunches in the more rural areas of Japan — much to the dismay of the English teachers working there. To find this dish in Tokyo today, you’d have to search it out, and while there are some specialist stores, it isn’t something that we’d recommend searching for.

For those who are generally curious about this dish, the raw whale sashimi has the same texture and taste as tuna, and when cooked, it’s very similar to a beef steak, if not more oily. There is a multitude of ways to prepare whale and while we are very much on the stance of “to each their own,” I personally love the majestic creatures and would love for them to be left alone. This is one dish I can’t personally recommend but wouldn’t stop anyone who wanted to try for themselves. Yes, you read that correctly. Shirako is harvested from male cod and is served in a few different ways. The most popular way this dish is served is raw in a simple ponzu sauce. It is also served the same way on top of rice like some kind of demonic kaisendon. Shirako is also served deep-fried in tempura batter or placed into a seafood nabe (hot pot). It has a velvety texture and a mild sea-like taste, which, even for the adventurous eater, is a pretty high hurdle to overcome. The easiest access point for this dish is most probably Shirako Tempura — coating the raw shirako in tempura and deep-frying it adds an extra texture to the dish, making it a little more palatable for western tongues.

For the best shirako in Japan look no further than Chiba. While most seem to be very reluctant to try this dish, myself included, if you do find yourself in Chiba and in a relatively adventurous mood, why not pop down to your local fish centric izakaya and give shirako a try? I’ll be supporting you in spirit.

You’d have to search pretty hard to find someone with an interest in Japan who hasn’t heard about the horrors of natto. When it comes to natto, the first thing people are usually alluded to is its health benefits — and, to me, this is always a sure sign that the dish isn’t that tasty. But, alas, at least we know eating it will somewhat improve our health. The sticky, stinky bean is the nightmare fuel for many foreigners who cross its path. It seems that with this dish it’s less about finding delicious ways to eat it and more about eventually becoming accustomed to the taste.

For those who want to finally conquer this food fear, there are a few simple ways one can prepare this Japanese food. Natto on rice is a staple. The rice masks a lot of the weird texture of the natto making it a little more palpable for those not so fond if the taste. For those who want to add a little extra flavor to the dish, a squirt of soy sauce goes a long way. For the advanced natto eater, we have a fusion of two items from this very list: natto kakigohan. This is a combination of raw egg, natto and soy sauce — take a moment to process that: the slimy mixture is usually served on piping hot rice. Although this dish sounds a little anxiety-inducing, you don’t have to travel far to find a Japanese native willing to lay down their lives to defend it.

Did your Japanese food fear make it to the top five? What other Japanese foods are you absolutely terrified of? Let us know in the comments! 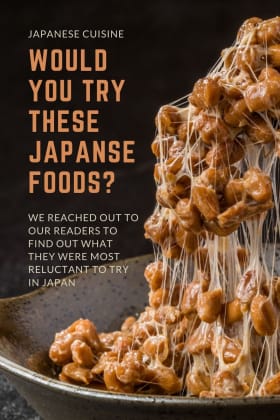