The latest in contemporary Japanese literature — in English first

If you’ve read everything there is to read in the “Japanese Authors” section of your local bookstore or library, look no further. This might just be the solution to quenching your thirst for Japanese literature. Now, that might sound a little dramatic but it’s no exaggeration. That’s exactly how it felt to read through Red Circle Authors’ compact novels — like drinking a glass of ice-cold water in the dead of Japanese summer.

Launched in 2018, Red Circle Minis is the first program by Red Circle Authors (RCA), an independent publishing house and passion project started by friends Richard Nathan and Koji Chikatani. It features award-winning authors from Japan in a pick-up-and-go packaging. Each book is a first edition and is being published in English first. “It takes considerable time and serendipity to meet, select and find our authors,” Nathan revealed in an interview. “An important factor besides being a talented writer with a reputation in Japan is whether they believe in our approach and philosophy, which is rather unusual.” In other words, it’s great for Japanese authors to widen their reach to international audiences.

But what does this unique approach mean for the reader? Well, the stories published in this Minis series is quite unlike anything you might’ve read before and feature authors that might have been inaccessible. Even if you might not click with every book in the Minis series, you’re guaranteed to read something contemporary and refreshing. Translated Japanese works can be limited when compared to the wide array of Japanese authors available in, well, Japanese. The reason is of course of commercial nature: Only authors that can sell hundreds of thousands of copies are likely to get more translations. Even between English and French, for example, the availability of Yoko Ogawa’s work changes considerably. This gives an unfair portrait of the richness of Japan’s literary scene. Through this series and their close work in Japan-based authors, RCA hopes to bring a bit of freshness by featuring authors that might have not hit your local bookstore’s shelves yet.

These small novels are compact, just a little larger than your typical smartphone screen. They are easy to pick up and pack for a day trip or commute, and there’s something uniquely satisfying in starting and finishing a story or two in an afternoon. Each book has beautiful covers that incorporate traditional Japanese prints and colors, as well as a signature red circle.

Though all different in their own ways, the six books of the Red Circle Minis linger in your mind even after you’ve read the last page. From relationships and infertility to legacy and our life’s purpose, each story explores a different facet of humanity in its own style and genre. Whether you’ve been reading translated Japanese literature for a long time or are just getting started, these books are a great addition to any bookworm’s library.

Half of the stories definitely fall into the science-fiction genre, including the latest release, One Love Chigusa. The author doesn’t quite hide the final twist but rather builds up in a way that really makes the reader sympathize with the protagonist’s internal chaos and confusion. It also pulls at some of our deepest fears regarding the future of humanity, which I will not spoil for you here.

Where to Buy Red Circle Minis

If you live in Japan, you can purchase Red Circle Authors’ book through Kinokunya’s Japan website. If you live outside Japan, fear not. You can find the entire series on Book Depository (generally a great place to buy Japanese literature if you live abroad!) and on Amazon.

Happy reading, and let us know in the comments which story was your favorite!

Can’t get enough of Japanese literature? Tokyo Weekender has its very own book club! 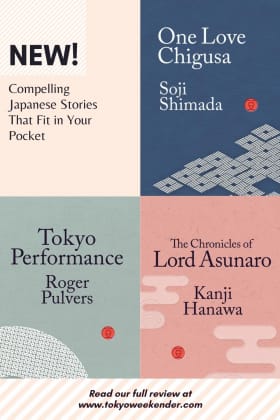