In Japan, there’s a running gag that every conversation starts with a comment about the weather, especially in the dead summer: “Atsui desu ne,” which roughly translated to “It’s hot, right?” Atsui is one of the first adjectives you learn when studying Japanese but there are other words that you can use to describe the unbearable heat of summer in Japan. About a dozen, to be exact.

While atsui is a versatile word, mid-August days tend to be especially humid and hot. You could pair it with an adverb, but why limit yourself to that when you can accurately communicate the intensity? 酷暑, read kokusho, translates to “intense heat.” You’ll see this word sometimes pop up in Japanese weather forecasts when the temperature rises above 35 degrees celsius.

Summer has its very own adjective. 夏い, read natsui, is a colloquialism that Japanese Twitter users like to use to describe sunny, summer days. While the dictionary translation is “blistering heat,” natsui doesn’t need to be used with a negative connotation. You can use while sharing a picture of a delicious iced coffee, for instance.

Translating to “sweltering heat,” 炎熱, read ennetsu, is perfect to describe the hours when the sun is at its highest. The hottest time of summer days when you feel that you could melt under the blazing sun? That’s ennetsu. Fun fact: Ennestsu is also used in the word 炎熱地獄 (ennetsu jigoku) which literally means “the flames of hell.”

Heatwaves are a serious threat. They can lead to dehydration and heatstrokes. But you don’t need to be in the dead of summer to experience symptoms. 夏バテ, read natsu bate, translates to “suffering from the heat.” More specifically, it signifies those moments when you feel exhausted by just walking to the grocery store. In other words, exhaustion from the heat! Stay safe out there.

夏負け, read natsu make, has a similar meaning to natsu bate in that it’s also used to express suffering from the heat. The difference lies in the etymology. Natsu make is composed of natsu (summer) and make (the root for the verb “to lose”). Literally, it means to “lose to summer.” The word is often used in promotional campaigns for salty gummies or sports drinks, which can help fight the heat of summer back.

If you’ve studied your basic kanji, you might easily guess the meaning of this word. 暑中, read shochu, means the height of summer. In Tokyo, this usually lands during the second week of August, right around Obon. It’s a popular time to travel, often to cooler places, though most Japanese households return to their hometowns during this period.

So kokusho referred specifically to temperature but 真夏日, read manatsubi, is used to refer to summer days when the temperature reaches or surpasses 30 degrees Celcius. You can (and maybe should) use both words together.

Straying a little bit from the heat and more into the fun of summer, 消夏 or shouka stands for “summering.” Use it when talking about anything you might do only in the summer. There’s also an expression called 消夏生活 (shouka seikatsu), which means “summer lifestyle,” kind of like the California vibes you get from visiting Enoshima at this time of year.

One tell-tell sign that summer is here is the sound of cicadas. They are characteristic of the Japanese summer. 夏蝉, read natsuzemi, is exactly that: a summer day so hot and so still that you can only hear the cicadas singing.

While long ago proved to be a myth, there’s nothing wrong with seeing the silver lining in sweating buckets through the warmer months. While struggling to stay hydrated, many believe that summer is a type when many lose weight as more people eat less and sweat more. In Japanese, it’s called 夏痩せ, read natsu yase.

All this talk about the heat probably made you think that you ought to avoid it. While it’s great to soak in the sun, it’s important to make sure you’re staying healthy and sometimes that means staying in, turning on your fan and chilling (literally) on your couch. This is called 暑気払い, read shoki barai.

With all these words you can use during the Japanese summer in relation to the heat, it’s also important to acknowledge the coolest time of day: early morning. 朝涼み, read asasuzumi, is for those chilly mornings those morning joggers are so thankful for. 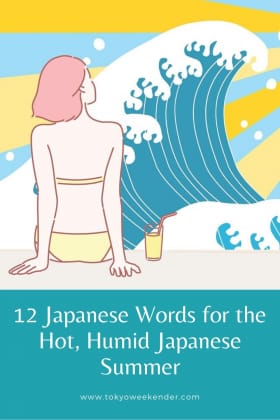