5 Best Places to Go for a Run in Tokyo

Instead of only ever running to catch a train, which the friendly posters at the station tell you not to do anyway, why not try running just for the heck of it? Here are five great places to do just that. The first rule of running in Tokyo is you don’t talk about running in Tokyo without talking about the Imperial Palace. Without a doubt, it is the capital’s most popular route. So popular that it can get a bit congested with runners. Not to speak of the non-running tourists trying to sneak a peek at the closed-off palace grounds. Remember you were once one of them.

With every runner tracking every aspect of their achievements and bodily functions through mobile technology these days, the information that one loop around the Tenno’s digs is exactly five kilometers might not be as valuable as it once was. Still, there are other reasons not to write this classic spot off: with the Old Edo charm of the castle walls and moat, a glimpse of the serious government buildings of Kasumigaseki as well as Marunouchi’s shiny temples of commerce, the route has a compressed ‘Best of Tokyo’ vibe.

It also has a nice balance of ups and downs, and the endless car traffic on your right will remind you that running isn’t always great for your health. The route is aesthetically most pleasing in autumn. Of course, you will not be the only one who knows that.
The 5-kilometer loop can be slightly extended on the Marunouchi side if you don’t mind a traffic light or two.

Access: Tokyo Station and several others. Kojimachi Station has a “runners station
(runsta) at Exit 4 where you can change, shower and sample the latest energy snacks for a reasonable fee (free membership required). The tree-lined promenade along Meguro River is one of Tokyo’s most popular spots for cherry blossom viewing. It’s also a great place to run in any season. The most running-friendly stretch is between Shimomeguro (down the hill from Meguro Station) and the general area of Nakameguro Station, but the route can be extended significantly in both directions.

If you wish to run here during cherry blossom season, better pick a time when the rest of the world is at the office or in bed. If you don’t feel like going straight all the time, take a detour through tiny, cozy Nakameguro Park. Beyond the Shimomeguro end of the run, the strangely attractive high-rises of Osaki await, and the formidable Rinshin No Mori Park is also not too far away.

Access: Meguro Station or Nakameguro Station, and many more, since this trail leads through no less than three wards (Meguro, Shinagawa and Setagaya). While jogging along Meguro River is great for many reasons, the river itself, fenced off and running deep below the promenade, doesn’t much factor in. If you prefer your river more present while river-running, consider Tama River. The entire trail is between 40 and 50 kilometers long, depending on who you ask. While the route has some very scenic spots, the area around the popular Futako-Tamagawa Station can be a bit barren, which has its own flair of post-apocalyptic romanticism. As a park as such, this one has room for improvement. In some areas you might get the impression it was built under the motto: “It’s a park – as in parking lot.” There are some greener spots, though, and there are designated lanes for runners and cyclists throughout.

This is the place to do some decidedly serious running outside of bland sporting facilities (if you do like those, however, the park also has some). Occasionally, ramen and beer festivals are hosted in the more parking-lot-like areas. Make of that information what you will. You did come here for running, after all.

Access: Komazawa-Daigaku Station is in warm-up walking distance, several bus stops are right at the park. 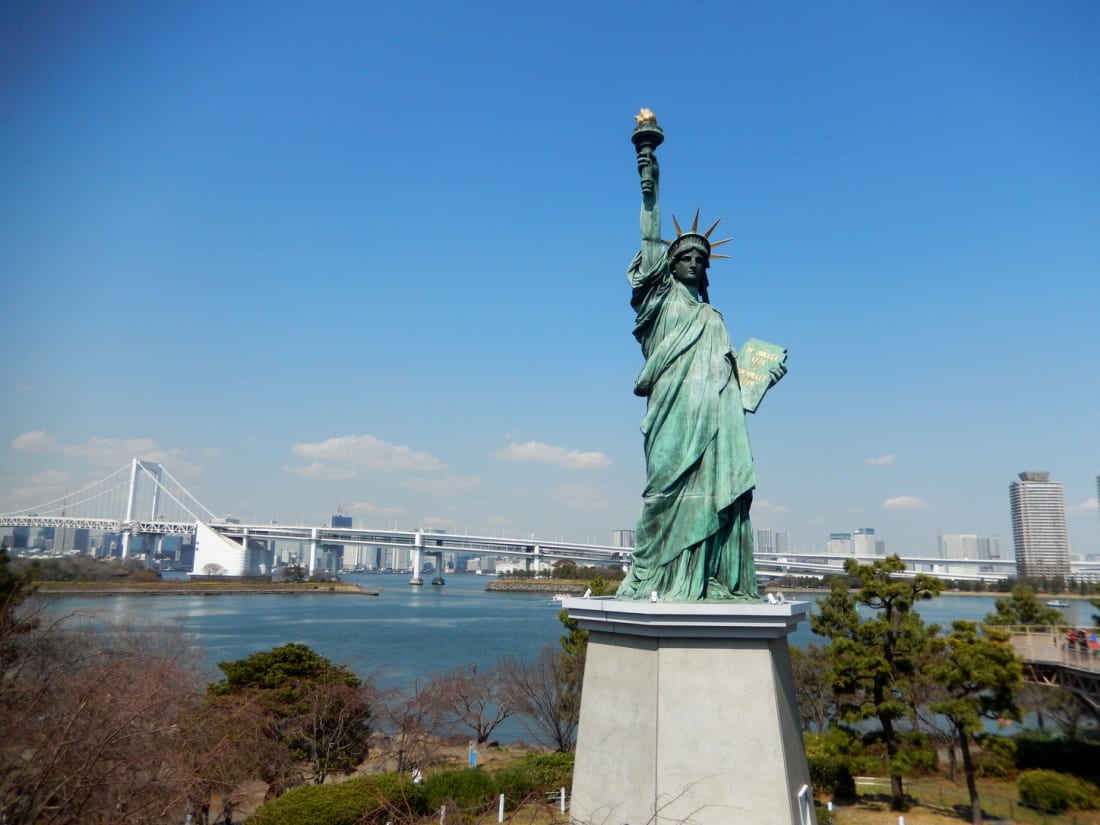 The artificial, adorably tacky island in Tokyo Bay does not only have malls, malls, malls and yet more malls. It also has several running courses; some officially designated, some improvisational. Run here for Odaiba’s boastful architecture, a peek at the Tokyo skyline, authentic seaside atmosphere, an inauthentic Statue of Liberty and a good variety of terrain including (but not limited to) concrete, sand and wooden planks.

After your run, the many malls of Odaiba offer just the right kind of uncomplicated restaurants to sabotage your sporty efforts with food and drink. Get over yourself and fall for the silly charms of Odaiba. You know you want to.

Access: Several stations along the Yurikamome Line. Take Daiba Station for the most scenic spot or Kokusai-tenjijo-seimon Station for Jogport Ariake, which offers lockers and showers.