There are few places on earth where one can feel simultaneously in heaven and hell. Unzen Onsen is one of them. Situated on the Shimabara Peninsula in Kyushu’s Nagasaki Prefecture, it has scenery that includes fascinating hellscapes and also the chance to pamper yourself in relative seclusion. 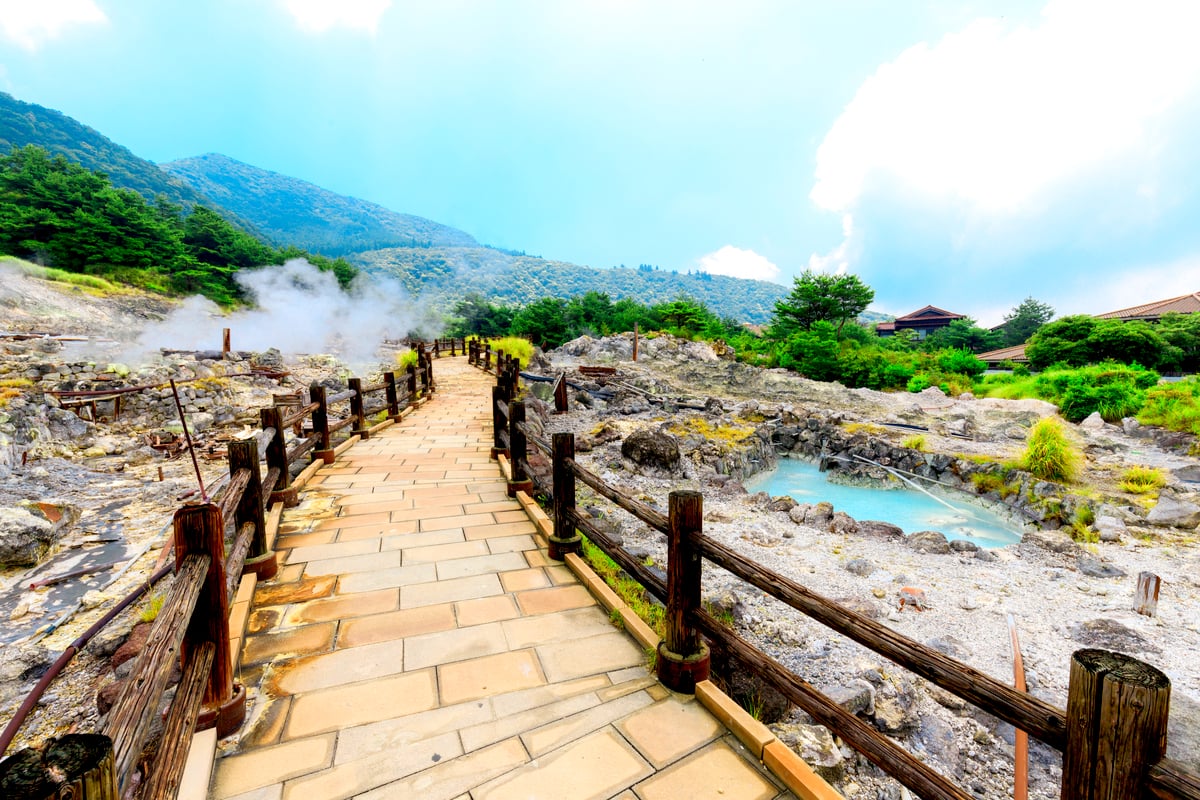 The Unzen area takes its name from Mt. Unzen, an active volcano (last major eruption in 1991) that sits roughly in the middle of the peninsula. Unzen-Amakusa National Park was Japan’s first national park; the area has also been designated as a UNESCO Geopark due to its various unique geological features, most of which derive from the volcano.

Unzen Onsen is about six kilometers south of Mt. Unzen’s peak, on the western flank of Fugendake, one of the mountains forming the peninsula. It has the atmosphere of a mountain resort town…until you step into hell. The Unzen Jigoku (hell) is a “hot spot” of fumaroles and mudpots, tangible evidence of the volcano cooking beneath your feet. A fumarole is a fissure in the earth’s surface through which steam — and sometimes other gases — emerge from underground. Mudpots are areas where onsen water just below vaporizing temperature is coming out of the ground, often so slowly that the earth it moves through dissolves into it. The mud is then pushed out of the earth, often by a gas bubble behind it, making it look like it’s boiling. As the mud moves away from its vent, it cools to form a hard rim trapping the mud in a “pot.” The color of the mud varies, depending on the minerals in the soil. In Japan, areas with lots of fumaroles and mudpots are known as hells.

At Unzen Onsen the activity of the fumaroles and mudpots is sufficiently predictable that trails have been laid, enabling visitors to literally go through hell. In winter, the steam rising in the cold air is very atmospheric; in summer, the heat to go with it is even more evocative. The smell of sulfur in the air completes the effect.

“There are few places on earth where one can feel in heaven and hell.”

Unzen Jigoku is mostly rocky, with a few hardy trees and shrubs that are acid-resistant. Interestingly, it is a bird haven with 40 species making Unzen their year-round home and 110 other species migrating through the area annually. Birdsong and bird sightings are common and at least as much fun as watching the mudpots burble.

There are helpful signs at particular points of interest across the area, which is much larger than it looks from the road. The signboard contains explanations of the geology of the area as well as relating some quaint local legends.

Perhaps a surprise to some visitors is a large cross on the hillside, a marker in memory of Japanese Christians who were tortured in these mudpots and hot springs of Unzen in the early 17th century when Christianity was gaining converts in Kyushu, much to the displeasure of the Tokugawa shogunate. The opening scene of Martin Scorsese’s 2016 movie, “Silence,” is based on these episodes, although it was not filmed here. At one spot in the “hell,” a vendor is selling hard-boiled eggs that have been cooked with the natural steam, a healthy, if aromatic, snack to munch on as you wander the trails.

Hell of a stay

The ability to snack while going through hell might be nice, but it is not the simultaneous experience of heaven referred to above. That comes later if you choose to stay at Unzen Kyushu Hotel, the hotel closest to hell, but also closest to heaven. Unzen Kyushu Hotel is a historic onsen hotel overlooking part of the Unzen Jigoku site. Established in 1917, this family-owned hotel was rebuilt in its centenary year to feature 25 stylish suites with private onsen baths. Both the rooms and the baths open onto private terraces overlooking Unzen Jigoku, truly a place to sit and simultaneously enjoy heaven and hell!

For most of its first 100 years, the hotel offered traditional onsen accommodation. It was particularly popular as an R&R spot for members of the military before and even during the Pacific War and later enjoyed popularity with bus tour groups. But when it came time to renew the hotel’s facilities, Akinobu Shichijo, the fourth-generation proprietor, decided to leverage the hotel’s past to launch it into the future. Akinobu, together with his wife, Yukiko, a native of Nagasaki city who has worked in hotel management since before her marriage, took a hard look at the tourism market and decided to take a fresh approach. Rather than try for the mass appeal so popular in Japan’s post-war growth years, they went a bit more upscale. They reduced the number of rooms and created an air of elegance and exclusivity. The result is paradise; Japanese-style omotenashi for the 21st century. When the hotel was rebuilt, the original Showa-era dining room was retained, its expansive windows overlooking a rocky field of fumaroles, floodlit in the evening. Here patrons can enjoy opulent multi-course dinners and breakfasts, sitting in heaven and looking down at hell. Yukiko, the hotel’s hospitality director, works with the hotel’s chef to design healthy fusion menus featuring fresh, local ingredients. Needless to say, menus vary daily and seasonally, providing diners with a real taste treat.

Before dinner, relax on the roof garden; after dinner, drop by the top floor lounge with its soft music, complimentary wine and comfy chairs, even the kind that massage you. This is a hotel that pampers its guests!

You might want to get out and wander through the little town, exploring its shrine, its shops and museums and even more of its hiking trails. Or perhaps the devil will tempt you to just relax and enjoy the heavenly atmosphere from your hotel. 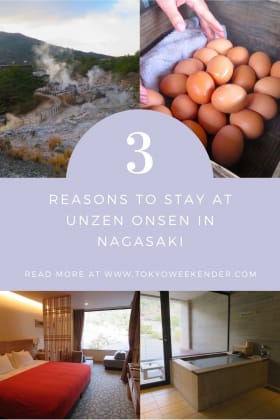