Festivals are the quintessential summertime activity in Japan, and, if you’re a kid, one of the best things about a matsuri is getting your mom and dad to buy you a colorful plastic mask known as omen. Today, Japanese festival masks come in all sorts of varieties, including superheroes, cartoon characters, magical foxes etc. The more traditional ones can trace their origin to sacred court dances and performances but today they’re mostly treated as silly-looking souvenirs. Underneath all that fun exterior you can sometimes find dark, disturbing histories, as is the case with the following popular omen: The most classic omen has long been Okame, the moon-faced, rosy-cheeked goddess of “many fortunes,” a name that she didn’t get ironically as today she’s considered the deity of marriage, childbirth, school exams, household harmony, jobhunting etc. She’s also an example of a “perfect wife”… because she’d rather die than have people know she was smarter than her husband.

Okame was actually once a real-life woman in 13th-century Japan. She was married to one Nagai Takatsugu, a renowned carpenter who, while working on the Senbon Shaka-do hall at Daihoon-ji temple in Kyoto, noticed that one of his pillars was too short to support the roof. Such a mistake threatened to ruin his reputation, but thankfully Okame came up with a simple solution to use decorative brackets to fill the gaps, something which has never been tried before indoors. It worked perfectly, and then, to make sure no one found out that a woman upstaged a man, Okame killed herself. But then the story still leaked out and nobody cared so, really, her suicide was double pointless. At least it explains why the Okame masks are so… deathly pale.

All that Glistens within Hyottoko is Gold The man with a headscarf and comedically skewered, puckered lips is Hyottoko, the second most popular matsuri mask ever, almost always appearing together with Okame as a kind of comedic married couple. But there’s nothing funny about the story of Hyottoko.

According to myths from Iwate Prefecture, one time an old man was gathering wood high in the mountains when he came across a princess of the underworld who took him to her palace and later gave him Hyottoko, a child with a strange face, as a gift, as one normally does. The man took a liking to the boy, especially after it turned out that he produced gold from his bellybutton. Sadly, the man’s wife wanted more gold so one day she started digging around in the child’s abdomen with a pair of tongs and killed him. Stricken with grief, the man made a mask resembling Hyottoko’s face to remember him and hanged it over his fireplace, which today is said to bring happiness to households who do the same.

Yeah, because nothing says good luck like the death mask of a child that was stabbed to death. Together with masks of oni demons, tengu omen are popular with kids because of their fierce appearance and hilariously huge noses. It’s good for kids to learn early on that physical imperfections are the secret to comedy.

Although all tengu can broadly be described as supernatural creatures with wings and long noses, there are actually two kinds of tengu in Japanese mythology. There are giants such as Doryo, a guardian deity of a sacred mountain in Kanagawa, and smaller, raven-like tengu who are considered a kind of patron of ninjas because of their magical powers. They are also misanthropic bastards with a penchant for sacrilege. They often spend their free time trying to seduce priests and nuns or kidnapping people and forcing them to… eat feces until they go insane.

The tengu omen almost always depict the larger, nobler tengu, but according to some versions of the myth, it doesn’t matter because they are really one and the same. So Japanese parents just have to roll the dice that the souvenir they bought for their kids actually depicts a mythological mountain monk and not a magic sociopath whose favorite hobby is interspecies sex and forced coprophagia. 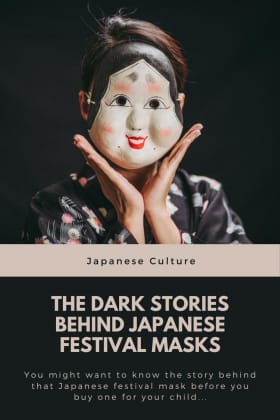