Learning Japanese: Outdated Kanji that Are Still Fun to Use

With its three writing styles, Japanese can be a formidable language to learn, and while katakana and hiragana can be a relative walk in the park, the real hurdle comes with the dreaded third writing system- kanji. For those who enjoy learning kanji, kanji can open a new world of books and movies, and makes traveling around Japan a breeze. While your Japanese friends will be impressed with your ability to write the kanji for “tea” at first, these grade school kanji aren’t going to impress anyone for long. Here are a few interesting outdated kanji which you can use to impress your Japanese friends and boost your Japanese ability.

While the kanji for Coffee, 珈琲 read ko-hí-, can still be found on stylish cafés around Japan, the kanji has been replaced by its sleeker katakana counterpart with the same reading, コーヒー. The kanji is, unsurprisingly, frightfully harder to write than its katakana equivalent. As the kanji is still somewhat used today it falls into the category of kanji that can be read but not written by a fair amount of Japanese people. For lovers of coffee everywhere, learning to write this intricate kanji will not fail at impressing your Japanese friends and shows your passion for that oh-so-perfect giver of life – coffee.

Whether you are feeling お洒落, おしゃれ or, オシャレ knowing the difference between the three writings may be the difference during your next text conversation.

Meaning troublesome or tiresome 面倒くさい、read mendokusai,  is usually shortened to the easier to write めんどくさい as the kanji is, ironically, too troublesome to write. The first character in this word is pretty straightforward but the second 10-stroke character, 倒, can be a pain to write down even when typing. When a situation is truly tiresome the word is usually further simplified to the more colloquial めんど、mendo, a powerful three-character word showing utter exhaustion at the situation at hand.

The kanji is rarely seen in casual conversation online but may at times present itself in books and other more modern written work, so while this kanji is slowly making its way out of the popular lexicon it should still be remembered to not only impress your Japanese friends but also improve your reading.

Smokers may have come across this kanji before, but for those who don’t partake, this may be the first time you’ve seen it. 煙草, read tabako, is the old reading for cigarettes and other tobacco-filled products, the kanji has been long since replaced by its katakana counterpart with the same reading – タバコ. Unless one finds themselves in a more rural setting one may never actually see this kanji out in the wild. Nowadays this kanji is reserved for old school tobacconists and little else, but if you do find yourself out in the sticks with an empty carton of cigarettes, you’ll be glad you remembered this older reading.

The kanji is pretty entertaining. Made up of two characters – the first being the kanji for smoke 煙, and the second being the kanji for grass, 草. Together these kanji create the reading for cigarettes but somehow the ultra-conservative nation of Japan with a zero-tolerance for drug use having a kanji which can be read as “smoke grass” will forever entertain me.

貴方 or 貴女, read anata, is the kanji for you. Already replaced by its easier to write hiragana counterpart, あなた, the kanji does still make an appearance in novels and mangas and thus for those wanting to increase their Japanese reading ability, it’s one to remember. Still, outside an autocorrect one would be hard-pressed to find this kanji featured in a text conversation. Nevertheless, the kanji is good to know especially for voracious readers.

The kanji is broken down into two parts, the first part being 貴 translating to precious or honorable, and the second 女 meaning woman. The other reading of the word shares the same first character with the second character translating to direction but in this situation takes the meaning of person. This is overall a more polite way to write you as the kanji almost honors the person rather than just stating their existence. 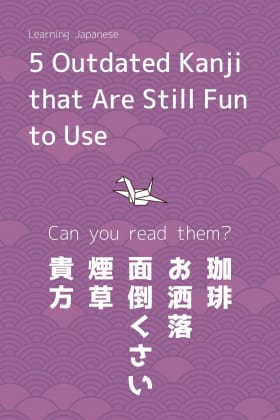