You could say that Japan has as many dialects as it has prefectures, and that wouldn’t be too far off. The country, roughly the size of California, is home to 47 different (though sometimes small) varieties of the Japanese language. If you’ve been studying Japanese for a while and have dabbled into some consumption of Japanese media in any form, you most certainly have encountered more than one Japanese dialect. You might even be able to recognize a few, which is truly a feat.

Japan’s history goes back well over 2,000 years. As an archipelago, its contact with other nations was relatively limited, with mainland China being the strongest in presence. Though Chinese was used among aristocratic groups for a few centuries, among the people there was a language that was slowly developing, and this all over the country.

It wasn’t until the 19th century that talk about the unification of Japan started, and part of it was a unified language that could and would be spoken by all citizens. This unified version of the language is called hyojungo, or standard Japanese. The nationalization of the school system and the early days of radio and television broadcasting helped expand hyojungo further. This is the Japanese that language learners in and outside Japan usually learn.

Dialects in the Japanese Language

In the mid-1900s linguists classified Japan’s many dialects to try and understand how the Japanese language evolved over the course of its history. Today, you can classify them in the four follower groups: Eastern Japanese (Kanto, Tohoku, Hokkaido), Western Japanese (Osaka, Kyoto, Shikoku), Kyushu Japanese and Hachijo dialect. You might be thinking: “47 dialects sounds like a lot. how can you distinguish between so many dialects?” From a linguistic point of view, Japanese dialects, like those in any other language, can be recognized by the changes in certain parts of speech.

Firstly, there is vocabulary. You’ll find that certain words vary greatly between regions. For example, kawaii (cute) becomes aishiraka in Hakata dialect. Differences in vocabulary also might include slight changes in expression. To say “throw away the garbage,” standard Japanese speakers would use the verb suteru, which means to discard of something. However, in Hokkaido dialect, suteru is replaced by nageru, which means to throw a ball or a rock.

Secondly, there are copulae. These are desu and da in Japanese and are usually used at the end of sentences or clauses. Osaka dialect is famous for its unique usage of Japanese coupulae. Da becomes ya, which can sometimes make the speaker sound a little riled up, and yo becomes wa. In standard Japanese, the latter is usually considered a more feminine sentence-ender, but Osaka is the exception to the rule!

Finally, verb conjugation can also be a great indicator. Nagoya dialect is particularly rich in these types of variations. The most popular example is Nagoya’s spin on -teiru, which is added to verbs to describe an on-going action or status. Tabeteiru, or “currently eating,” becomes tabetoru.

The first exposure to Japanese dialects for many Japanese children and teenagers is through media. Whether they first hear it in a film set in another region or on television, there is undeniably an awareness of other dialects in popular culture that educates the masses.

Kansai dialects, especially Osaka-ben, is often the first one that many young children or teenagers are exposed to. The biggest contributing factor is that the Kansai city is the hub for Japanese comedy, and it’s not rare to see a comedian with a few Osaka-esque speech patterns. Osaka-ben is also used quite frequently in anime. The classic character Kero-chan from the ’90s was probably most Japanese learner’s first encounter… 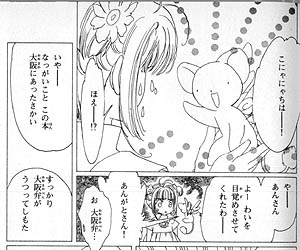 For more dialect fun, check out this directory and example list