Onitsuka's photographs are keeping the spirit, culture and quirky décor of these rooms alive

The most interesting thing in the room? “The bed,” says Chinatsu Onitsuka. Though a basic and possibly even boring piece of furniture in any other context, in the world of Japanese love hotels, the bed becomes a dream vintage car, a plane or a UFO. “That’s where [designers] would get most creative,” she says, taking another sip of her iced coffee as we chat about her ongoing series at a busy coffee shop in Tokyo.

A full-time designer, Onitsuka works at an architecture firm by day and as a self-named “love hotel researcher” by night. For the last 10 years, she has spent countless hours documenting and sharing her love-hotel discoveries on Twitter and Instagram. She even has two books (in Japanese) on the subject to her name: “Love Hotel Collection” (2013) and “The Complete List of Japanese Love Hotels from the Showa Era” (2015). Her drive lies in her deep love for interior design. Onitsuka is passionate about the creativity that love hotels represent, especially those built in the Showa Era when the unique venues were at their peak. Unlike many other aspects of Japanese culture, love hotels are not descendants or a renaissance of an older custom. Their rise in the modern Japanese landscape was possible thanks to particularities of Japanese culture, however, along with the influence of American motels. In 1960s Japan, cars became more popular and highways were built and expanded at a rapid pace. Seeing the successful take-off of an accommodation type suited for truckers, travelers and businessmen in the United States inspired Japanese real estate developers to open their own version here. They quickly found, though, that their true clientele were young couples. The difference in demographic was so clear that motel owners started experimenting with their interior decor – and this is what would eventually become one of the defining aspects of Japanese love hotels.

The motels built in Japan in the 1960s were not all that different from their American counterparts, so where did the drastic contrast in demographic come from? “In your home country, where do you go to [hang out] with your partner?” Onitsuka asks me in response to the question. From my personal experience, growing up in Canada, it wasn’t uncommon for young couples to spend time together at one of their parents’ houses. But in Japan, as Onitsuka explains, “homes are small. They are designed for bachelors or small family households.” Living in a pretty tight space in Tokyo myself, I can’t deny the fact that there is really not much room for a second person.

Even for bachelors living in larger apartments in Japan, bringing home a date also wouldn’t always be the obvious thing to do at the end of a night out. Young adults stay true to their inner and outer circles (uchi and soto in Japanese); a sort of social classification that distinguishes your acquaintances and co-workers from your friends and family (although this separation might differ from one household to another). Onitsuka explains that bringing home somebody you might not yet be dating too seriously would be the equivalent of bringing that person into your inner circle. Another interesting aspect she highlights is the association of the inner circle with the mundane day-to-day life – not the association you necessarily want during that first flush of love. “I was an undergrad, and I remember bringing a camera,” says Onitsuka as she tells the story of her first visit to a love hotel. Already developing an eye for interior design, it was her curiosity for this unusual bubble in modern Japanese history that inspired her to dedicate her spare time to the subject. She quickly found that the variety of rooms and themes was virtually endless, with each and everyone having a unique-shaped bed. The discovery of this simple retreat with over-the-top décor is at the heart of Onitsuka’s ongoing passion for love hotels. There were never two rooms exactly the same, and so she wanted to see them all. When talking about the design of Showa-era hotels, she reveals that round beds were particularly favored and designers weren’t afraid of incorporating some mechanics, too. One of her favorites was inspired by the merry-go-rounds at Disneyland. On the walls were a series of Mickey Mouse graphics, which gave the room a nostalgic 20th-century Americana feel. Over the bed was a circle of lights, a dropped ceiling mimicking the trunk of a carousel. On the walls were trims of windows and doors that resembled the style of small-town county fairs. Around the bed were two mechanical horses. Before I can ask, she says, “Yes, they spun.”

Love hotels wanted to be distinguished from your standard bed and breakfast and aimed to be a place to escape the real world, offering guests a change of scenery. This is where designers went all out with décor. At the height of their appeal, they were so appreciated that they were featured in magazines. However, because of recent building regulations, these fantastical spaces are disappearing, being replaced by something closer to business hotels. In trying to maintain their income, certain hotels have been trying to repurpose their rooms and open themselves to a wider variety of customers. Nowadays, love hotels have also become popular spots for hosting joshikai (girls’ parties) or serving as a photoshoot studio for cosplayers who might require a very specific type of set.

In English media, love hotels are sometimes portrayed in a relatively negative light, presented as one of the dark facets of Tokyo nightlife. For my final question to Onitsuka, I ask her how tourists or foreign residents can best enjoy the positives of love hotels. “Don’t go to a love hotel if you’re looking to relax,” she says, smiling. “It’s exciting to stay in these amazing rooms.” She recommends taking time to pick out which hotel to visit, much as you would pick out any accommodation for a trip. Don’t simply opt for the known red-light districts in Tokyo and do make sure you sift through the bland recommendations online – you wouldn’t want to miss out on the truly unique experience of spending a night in an authentic Japanese love hotel. There are many love hotels near Shibuya, Shinjuku and other stations on the Yamanote line, but the one I’d like to recommend is Hotel Papion. While small, the hotel has many noteworthy rooms, including one with an open-car-shaped bed and another furnished with a white grand piano. This particular hotel embodies the love hotel culture in Japan perfectly. It’s reasonably priced and located in the city, so it’s easy for travelers to access and enjoy for a few hours. This is a rare type of love hotel in Japan and is heavily BDSM-themed. It’s located in Azabujuban, an area where many of the embassies are located and is thus very much loved by both Japanese and foreign residents. It can look quite intimidating and dangerous, but I assure you the staff are friendly and professional, and once on site, it really doesn’t feel scary. I’d recommend this to those who want an atmosphere inspired by Tokyo’s underground culture. This hotel is in Chiba. If you’re looking to get away from the city, this is the one I would recommend. The facade, entrance and interior are inspired by European palaces. It is said that the furniture was built by expert craftsmen. For a similar price of a small business hotel in Tokyo, you can get a romantic and luxurious setting here. And, while most love hotels in Japan are exclusively for couples, this one also welcomes families and groups. 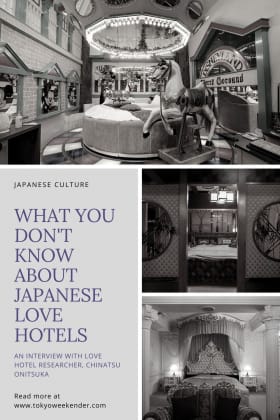