How to Find Authentically Japanese Vegan Food in Tokyo

No matter how you cut it, being vegan in Japan is challenging. Japanese menus in general can be daunting for everyone. To my question, “Want to go to a tabehodai shabu-shabu or an okonomiyaki place?” – a visiting friend responded with, “Can you say that again, in English?”

Deciding between the “meat-dipping soup” and the “cabbage pancakes” is not that hard, compared to navigating vegan options and negotiating with staff for food adjustments. First of all, your Japanese needs to be on point, as well as your knowledge of local ingredients because words like “dashi” and “katsuoboshi” will pop up often and it’s good to know that they are, for lack of better words, “fishy soup” and “fishy flakes” respectively.

On top of that, be prepared for low awareness of what is actually vegan or not, because often staff will not know. A true story: I was served something with mozzarella after asking for no cheese. The staff that night was pretty shocked to learn that mozzarella is also a cheese. Fun times.

There are dedicated vegan restaurants in Tokyo, but what happens when you want a break from tasty vegan doughnuts and burgers, and crave something authentically Japanese? When it comes to sampling local cuisine, the more authentic the better.

Vegan ramen aside, how about food that is naturally vegan so you don’t have to even check if it’s vegan? So, we consulted the professionals from Foodie Adventure Japan – vegan tour guide Jackie Janssen and Gizem Sakamaki, guide and owner of Foodie Adventure. They are all about being inclusive, offering vegan, gluten-free, Halal and other foodie tours for people with dietary restrictions, along with their tours catered to omnivores.

They helped us boil this list down to only traditional Japanese foods that are authentically vegan. This means that one can just point to a menu and order these foods without knowing any Japanese and without asking for any tweaks, and get a 100% vegan option without much fuss. Soba noodles have been a fixture of Japanese cuisine for centuries with records going back to the 8th century. Soba noodles taste like home, like nostalgia, like Japan. Soba even has a special lucky meaning attached to it when eaten on New Year’s Eve and called toshikoshisoba.

From school cafeterias and cheap ticket machine restaurants near every station, to Michelin star soba restaurants, soba is one of the most ubiquitous dishes in Japan.

Important to remember: no broth! The soba broth, called tsuyu, contains dashi, the fishy soup stock. When ordering soba, you will be asked whether you want soba hot or cold. Vegans should always go for the cold option called mori soba or zaru soba (the hot one is called kake soba).

While the hot soba noodles come out immersed in a bowl of broth, the cold soba is served on a traditional bamboo mat with dipping broth on the side, as well as wasabi paste and finely chopped scallions. As we said, always avoid the broth, but in case you need extra flavor for the buckwheat noodles, use soy sauce.

This authentically vegan dish is a safe choice even when you speak zero Japanese. If you can speak some Japanese or the staff can speak English, ask about their tempura, a dish that is best friends with soba. Tempura is usually vegan, but you need to check if the particular restaurant uses eggs in their batter. Of course, choose only vegetable tempura, skip the shrimp. Walk confidently into any sushi restaurant because there will always be cucumber sushi rolls for the hungry vegan. This is not a new invention either, it is an authentic type of sushi called kappamaki and that name testifies to its roots in tradition. Kappa is a Japanese folklore demon that famously loves cucumbers so much, legend says you can catch one with cucumber bait. Similar to inari sushi getting its name because the Inari fox god loves it, the kappamaki gets its name because the lovable Kappa imp is crazy for cucumbers. This simple vegan sushi is definitely a cultural bite.

There are several other veggie sushi options, but Foodie Adventure guides have a few warnings so that you’re on the safe side. Nasu nigiri is made with pickled eggplant, but you need to ask the staff to hold the katsuoboshi flakes they usually put on it. The slimy trio, as it is often called, of natto, okra and yam gunkan maki (each a separate maki) is a good option if you can check with the staff that no dashi broth has been added to it. If you cannot speak Japanese and staff cannot speak English, the cucumber rolls are a safe vegan choice. Many traditional Japanese sweets are vegan – using mainly rice, azuki sweet red beans, agar-agar, etc. Kibi dango in particular (sweet dumpling made with mochi flour) is a good choice of traditional Japanese snack that is also vegan. Like most dango delicacies it consists of chewy mochi balls covered in kinako (roasted soybean flour) skewered on a stick. The mochi is made of sorghum grain.

Vegan guide Jackie says most mochi is vegan, except rarely when it has a cream filling instead of azuki beans. Same goes for other Japanese desserts like anmitsu – mostly vegan but watch out for cream fillings and ice cream additions.

If you or someone with you speaks Japanese, or the staff speaks English, your list of vegan Japanese dishes can include tempura, natto, okra, yam or eggplant sushi, and so on. As the food guides from Foodie Adventure Japan say, “No one should be missing out on Japanese food.” 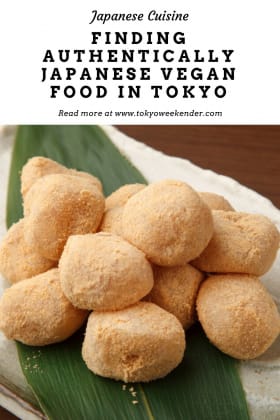