10 Podcasts About Japan You Can Listen to Right Now

For times when you feel a little disconnected with music, podcasts are often solid options when you just want to be listening to something. They make for good background noises while you’re working from home without the distraction of a television show. And while podcasts used to be reserved for our commutes, during the coronavirus pandemic the global podcast audience has increased by 42%.

Here is a roundup of a few interesting podcasts with a single common theme: Japan. Many readers may already be tuned in to some of the major podcasts about Japan, so for this compilation, we present the most understated, informative and just plain fun ones out there.

Tokyo Speaks is a podcast that highlights the international community in the Japanese capital. There are an infinite amount of things going on in Tokyo, and as a foreign resident, you might be interested in knowing what others are up to. Every episode is an interview with one or several guests. Subject matter ranges from hard topics like parenthood in Japan to the introduction of noteworthy new businesses and initiatives.

2. Deep Dive from The Japan Times

An alternative to staying informed about what’s going on in Japan is Deep Dive, a long-form podcast from The Japan Times. Each episode covers trivial or serious news discussed by some of the journalists of the publication. For those aspiring writers or reporters out there, host Oscar Boyd does an amazing job in also asking questions about the difficulties of writing a piece, including collecting data, research and securing interviews, which gives an additional insider’s look into what a journalist’s job looks like.

3. Japan on the Record

While this podcast definitely centers around Japanese news, it is actually produced at Yale University. Each episode receives scholars and experts from around the world who specialize in Japan in one way or another and bring to the table their view on recent events. Many often come with a unique approach or concentrate on aspects that might’ve been missed by other media.

History of Japan might be among the most popular of podcasts on this list. After more than 330 episodes, host Isaac Meyer is still making Japanese history fun and interesting. In most recent uploads, the podcast covers the history of the Olympic movement in Japan and why the 2020 Games are so important.

Make your way from Kuchisake-onna to Aokigahara with host and translator Tara A. Devlin. While there seems to have been no new episodes since October 2019, Toshiden dives headfirst into the origins of Japanese urban legends in bite-sized episodes. This podcast definitely falls under the horror category, so we wouldn’t recommend listening to this going to bed (unless you want to be spooked).

Hosted by author Thersa Matsuura, Uncanny Japan is a podcast about old Japan. From superstitions to language quirks, it’s a look to some of the most interesting snippets of Japanese culture she found when doing research for her writing. Each episode is beautifully narrated with the sound of the wind or the rain in the background, making Uncanny Japan something more of a hybrid between a podcast and an audiobook.

Tofugu is a well-known resource among Japanese language learners. Their podcast offers a casual approach to the Japanese language, with each episode dedicated to clarifying nuance in specific expressions or words, even how to count. We recommend this to anybody interested in linguistics or is trying to get back into studying and needs a refresher.

We had to include a comedy podcast on this list. Hosted by comedians Bobby Judo and Ollie Horn, this weekly podcast that chats about current events and life in Japan with the occasional guest. It’s a more casual approach to Japanese culture and news, told through personal stories jokes and interviews. It’s funny and lighthearted, an excellent addition to your library.

Japan 2.0 offers its listeners a much-appreciated unromanticized view of life in Japan. Hosts David and Matt discuss what many of us take for granted until you move to another country, mundane things like supermarkets or post offices. If you are considering moving to Japan, either as an exchange student or an employee, this podcast might be one to try listening to get an idea of what to expect once you’re here.

Hosted by food writer Akiko Katayama, Japan Eats is a podcast for all of the foodies among us. Discussing a variety of culinary topics from your classic sushi to regional delicacies and even special cooking tools, if you’re interested in Japanese cuisine, you will love every episode. 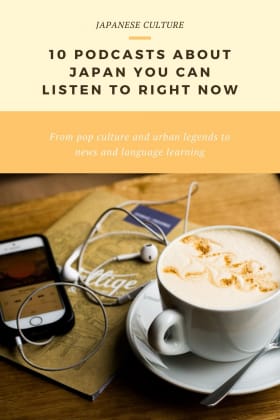