Rewind to Christmas Eve, 2010 – my very first visit to Kyoto. Wandering the nearly deserted alleys of nighttime Gion, I caught tantalizing snippets of koto music and glimpses of proprietresses in gorgeous kimonos through the lattices, with the telltale tall okobo shoes of maiko (apprentice geisha) lined up neatly inside. My imagination was immediately captured by the mysterious and alluring image of maiko and geiko (full-fledged Kyoto geisha).

“Tourists, not only foreigners but Japanese as well, are hypnotized by the geisha of Kyoto,” says Maria Superata, a Kyoto-based interpreter and founder of the GeishaKai blog. “This profession has been a mystery for many years.”

So mysterious, in fact, that it’s easy to forget that, despite their extraordinary experience, “geiko and maiko are just normal hard-working women with good and bad days, exhaustion, and a variety of emotions.” With this in mind, says Superata, her mission is to “enhance their humanity.” The Daily Life of Maiko and Geiko in Kyoto

Kyoto is one of the last strongholds of geisha culture in Japan. Prior to World War II, geiko in Kyoto numbered around 80,000, whereas today it is estimated there are only around 300 maiko and geiko working in Kyoto’s five hanamachi (geisha districts).

Superata says, “Nowadays, there are not too many geiko born in Kyoto. Usually, these ladies come from different parts of Japan, graduate junior high school and arrive to Kyoto at the age of 15 to start their geiko training.” Maiko are trained for around five years by their okiya mother and a more senior geiko. Any money made is turned over to the okiya mother, who controls the finances and all the expensive kimono, hair ornaments, and accessories that maiko wear. All the maiko and geiko belonging to that okiya have similar names, as a maiko’s name is taken in part from her geiko sister.

For the young women training as maiko, the hours are long and there is little privacy or downtime. They spend their days learning the shamisen, dances and classical Japanese arts such as tea ceremony and flower arranging, and their evenings performing and entertaining. Those not from Kyoto are also expected to master the Kyoto dialect. Unlike geiko, maiko must use their own hair for the elaborate hairstyles (there are several depending on their age and stage of apprenticeship), which are set once a week at the hairdresser.

Some tourists pay a considerable sum for a maiko “makeover” by one of multiple henshin studios; chances are if you see a maiko leisurely strolling Gion’s streets during the day, especially those that happily stop for photographs, it’s most likely a tourist.

At around 5:45pm, maiko make their way through Gion’s alleys like elegant butterflies on their way to appointments at some of Kyoto’s most exclusive teahouses. Pair the widespread fascination with maiko and geiko and the huge influx of international tourists to Kyoto and encounters between the public and the entertainers have become increasingly troublesome. Both domestic as well as international tourists have chased, stopped, swarmed and even pulled on the expensive kimono of maiko and geiko as they are on their way to appointments – all in order to snap a picture with them.

It might be questionable to swarm around such young girls, invade their private space or stalk them at night just to get a blurry photograph for our social media account.”

Superata explains, “Geiko and maiko are not allowed to stop for photos when they’re still in the middle of their working shift. When they walk (or even run) between the teahouses from one engagement to another, the clock is ticking. Out of respect for the customers who pay for the journey from one place to another, geiko and maiko cannot be late for the banquets. It’s extremely difficult to navigate the narrow streets of Gion while wearing that specific outfit and being stopped by crowds of tourists. Some of the geiko and maiko don’t like being photographed, either. It might be questionable to swarm around such young girls, invade their private space or stalk them at night just to get a blurry photograph for our social media account.”

“Guidebooks usually promote so-called “geisha hunting;” that’s why tourists might have the urge to chase geisha on the streets, and some of the visitors might even treat Gion as some kind of historic theme park. But we have to keep in mind that Gion is not a safari site; it’s just a scenic town inhabited by many respected Kyotoites who need to live and do business peacefully. I personally think that it’s time for a serious debate about sustainable tourism in Kyoto.”

Due to this issue, the city of Kyoto recently enacted a ban on photography in the private alleys lining Hanamikoji. Fines of up to ¥10,000 are now given for photography without a permit. If you do encounter maiko or geiko on their way to appointments, it is respectful to first ask if it is okay to photograph them. They are usually in a hurry to their next appointment, so don’t be surprised if they politely refuse, and don’t follow them. Where to See a Maiko or Geiko Performance in Kyoto

To have your own maiko or geiko encounter, consider Gion Corner and Miyako Odori, both of which run around ¥3,000. You will have the chance to see geiko and maiko on stage performing traditional dances, but no direct interaction. Maiko Theater offers several affordable plans including a box lunch and the chance to interact and take photographs with a maiko.

For around ¥20,000 per person, you can also participate in a small group dinner with a maiko for two hours. Beginning with a traditional dance, the maiko then visit each table for several minutes before leading the group in traditional interactive games called ozashiki asobi like konpira fune fune and tora tora and the opportunity to take photos with the maiko.

During my most recent visit to Kyoto, I decided to make a booking for Enchanted Time with Maiko hosted at Yasakadori Enraku. I arrived at the restaurant on a rainy evening and the surrounding streets were nearly deserted. As we began our eight-course traditional Kyoto dinner, our maiko Fukuya of Miyagawacho arrived and introduced herself before performing “Kyo no Shiki.”

Originally from Fukui Prefecture, Fukuya has spent the previous several years mastering the Kyoto dialect and the traditional arts. During our chat, I had the opportunity to ask Fukuya about her favorite dance to perform (“Kyo no Shiki,” which acts out the four seasons of Kyoto), and whether she had had any surprising or memorable interactions with foreign guests (she appreciates the honest reactions and open emotions from overseas visitors). The two hours in her presence flew by and she gifted each guest with a small memento. 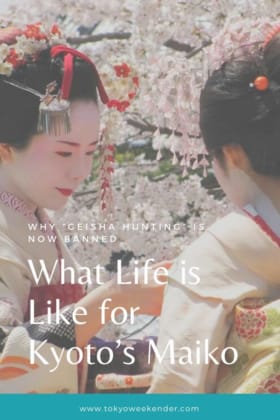