Where to View Plum Blossoms Near Kyoto and Nara

“In this propitious time of early spring, the weather is clear and the wind mellow. The plum blossoms open like powder in a mirror and the orchids emit off the sweet scent of a perfume.”

Although cherry blossom viewing is particularly popular amongst modern-day tourists, approximately over 1,200 years ago, enjoying plum blossoms in spring reigned supreme over all other flower viewings in Japan.

People’s love for plum flowers at the time are clearly portrayed in many of the waka (Japanese poetries) collected in Manyoshu – the oldest book of Japanese poetries written during the Nara period. As you can read from the poetry introduced above, the way in which the plum blossoms break the winter daunts and beckon spring has appealed to many people’s emotions throughout history.

The beautiful depiction reflects harmony and explicitly outlines the origin of Japanese aesthetics. As such, due to its cultural and historical significance, this verse was recently used as a model of the new nengo (Japanese era), Reiwa.

The world of Manyoshu continues to dwell around the Kansai region including Nara, Kyoto and Mie. Here are some recommended sites where you can get a glimpse of the plum trees in full bloom and celebrate the first spring of Reiwa at its element.

Located far east of Nara Prefecture, Tsukigase Bairin (Tsukigase plum valley) is a little-known spot where you can witness the spectacular view of wild plum trees that inhabit around the gorge of Tsukigase. Approximately 10,000 plum trees bloom en masse through mid-February to end of March, predominantly along the Nabari River (aka Satsuki River), which flows down the center of the valley.

The delicate pastel pink and white gradients of early spring gently engulf the silent winter mountains to create a poetic landscape which reminds us that spring is just around the corner. The extent of Tsukigase Bairin’s beauty has earned its special title – a place of scenic beauty of Japan since 1922.

Located in the northern district of Kyoto city, Kitano Tenmangu is a Shinto shrine established in 947, famed for its marvelous plum garden that starts to bloom around early February and lasts until late March.

This shrine is the head of all Tenmangu – a group of shrines that worships Sugawara no Michizane, a scholar, poet and a politician of the Heian period who is currently recognized as the god of learning, commonly known as Tenjin.

During Sugawara no Michizane’s lifetime it is well-known that he adored plum flowers. As such, to commemorate Sugawara no Michizane, many of his associate Tenmangu or Tenjin shrines decorate their grounds with plum trees and display a mon (crest), which includes an image of his favorite flower.

Amongst all the plum gardens found at these shrines, the blooms at Kitano Tenmangu surely are the best of the best. Ceaseless colors and witty scents emitted from over 1,500 plum trees with approximately 50 varieties immensely fill the premises and offer some fascinating cultural and historical experiences.

Admission to Kitano Tenmangu is ¥1,000, which includes some Japanese tea and sweets to enjoy while you admire the blossoms.

For the optimal way to reach this site on public transport, catch the Kyoto city bus (50, 101) from JR Kyoto Station and get off at Kitano Tenmangu Mae bus stop.

Located at the foot of the Suzuka mountain range, Suzuka forest garden in Mie is a research ground where investigations on the preservation of traditional plum tree cultivation methods are currently undertaken. As you set foot inside the plum garden, you will instantly acquaint with more than 200 plum trees, including some precious breeds.

While all the lively spring colors of plum blossoms are truly gorgeous during the day, the beauty of this garden further raises its bar when the ground is fully illuminated at night. The magical scenery of sparkling spring gems should set your year off with a perfect start, both artistically and culturally.

The plum garden is open to the public only during the flowering season (February 22 to end of March), thus if you are looking for some one-of-a-kind experience in a mystical setting, buckle up for a trip to Suzuka forest garden this spring.

Admission to Suzuka forest garden is ¥700~¥1,700 (price fluctuates every year)

For access to Suzuka Forest Garden, board the Kintetsu line from Kintetsu Nagoya Station to Kintetsu Yokkaichi Station, then change to Kintetsu Yunoyama line for Kintetsu Komono Station. There is a fair walking distance from the station to the venue, thus it is a good idea to catch a taxi to the site. Pre-booking a taxi is also highly recommended. 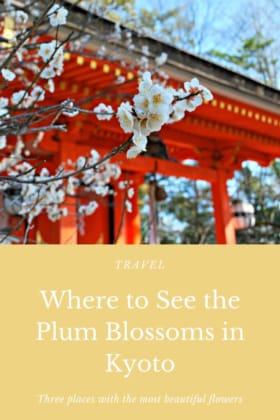