“I Rented a Homeless Guy for a Day”: One TW Writer Spends an Afternoon with Comedian Kotani Makoto

In Tokyo, you can hire out all sorts of people just to keep you company for a day or an occasion. Here’s what happened when Zoria Petkoska asked homeless Kotani Makoto to spend an afternoon painting art in the park with her. The bespectacled mustachioed pointy-twirly-hat-wearing man unsurprisingly did attract a lot of attention the day I rented him to hang out with me. After all, he literally wears a bell around his neck. Kotani Makoto stands out, dressed head-to-toe in red as always, against the green of Kichijoji’s Inokashira Park.

As he describes himself, Kotani is a failed comedian but a successful homeless person. He rents himself out for only ¥50 at a time. This funny man is so charming that I cannot fathom how he could not have made it in the entertainment industry. He easily latches on to every strand of conversation, riffs on my half-jokes, never tripping on my poor Japanese, and doesn’t hesitate to grab the brush when I ask him to paint with me. “I’ve learned so much now that I’m homeless,” he says, visibly excited to be painting on canvas for the first time.

The Sushi Spaceship Soaring Through Space

Staring at the blank canvas on the easel, we both admit we have no idea what we’re doing. “You have to start with red,” I suggest. Kotani loves red – because it’s happy, lively, eye-catching and the color of Shinto shrines.

“You should see how boringly I dressed before I became homeless,” he says as he shows me a photo of a plain-looking guy who’s nothing like the Kotani in the custom-made red clothes standing before me. “Some people think I’m trying to be Santa Claus, but that’s not it.”

Kotani also loves sushi, he proclaims. His childlike spontaneity is refreshing and pulls you into his world. He ends up drawing himself on top of a flying piece of maguro nigiri, much to the amusement of passers-by, while I add stars to the surrounding galaxy. We make ridiculous puns and he teaches me his Kansai dialect, as if we’ve known each other much longer than just 30 minutes.

I see firsthand how Kotani effortlessly makes friends, inviting strangers to join us. Some of them even stop to ask whether the painting is for sale, perhaps thinking he is some big-deal eccentric artist. We both look at our kindergartener-level painting and chuckle. Although the homeless are often judged harshly, becoming homeless is as simple as not being able to make your rent one day. It’s how Kotani ended up here, after some time spent living with fellow comedian King Kong Nishino. “Nishino-san is a great comedian and we are friends to this day,” Kotani tells me. I double check that I understood him correctly. It seems Nishino was showing some tough love by kicking his friend out. At the same time he sparked an idea, suggesting that Kotani use his misfortune as a comedy source. He is also the one who gave him the idea to rent himself out and do odd jobs for just ¥50.

Becoming a “happy homeless” came afterward. Although he did sleep rough for a while, Kotani has lived as a guest in different people’s homes for most of the seven years that he’s been homeless. Tweeting about his homelessness earned him an online following, and the low fee for his time means anyone can rent him. “Yes, it’s cheap, but I learn so much and I meet new people,” Kotani tells me. But like most of his other renters, I am uncomfortable with just how cheap his fee is, so I buy him a drink. It’s the least I can do. “Where on earth would I have tried painting if it wasn’t for you today?” he reassures me.

“I’ve learned so much now that I’m homeless”

While some people treat him to drinks and food, others offer him a temporary roof over his head. “I am basically couchsurfing now,” he says, explaining that either people invite him to stay with them or he tweets asking if there’s anyone willing to host him. The people supporting Kotani in any small way are like a big family to him, not only inviting him for sleepovers, but also crowdfunding to pay for his pocket WiFi and his phone contract, so that he can stay online and maintain his lifeline to his supporters. Fans have crowdfunded his biography, a photo exhibition in New York and travels around the world to 25 countries.

With his social media fame spreading, Kotani has received invitations from as far away as Mexico to visit his fans. In a huge metropolis where loneliness is inescapable, Kotani says he is always with people. “I’ve never been happier,” he says assuredly. Most people simply want to enjoy Kotani’s company, so they rent him just to hang out. Sometimes they will ask him to do small tasks such as “Take my photo,” “Tell me a story” or “Be my photo model.” He tells me he loves making people happy so he gladly takes on jobs like babysitting, dog walking, running errands or just general entertaining. He would never accept to be rented to do something that would make someone unhappy.

Other activities he’s been rented out for include posing as a nude model, visiting people in hospitals and even being a surprise present for one woman’s boyfriend – when she couldn’t show up for her planned date she sent Kotani as a hilarious replacement.

But the most surprising renter has to be the one that ended up becoming his wife. He met Mon-chan in Nagoya and they decided to get married on a whim. His “family” of fans crowdfunded the wedding party, which took place at Hanayashiki Amusement Park in Asakusa. The couple go together like mustard and ketchup, with Mon-chan usually wearing yellow to pair with Kotani’s red. He tells me they want to be instantly recognizable and teach people about their “free marriage.” By this he means they occasionally meet and travel together, but don’t live together. However, they are monogamous, and he adds, “If I stay married to Mon-chan forever, I would be happy.”

This friendly wanderer now views homelessness as freedom. He says he feels borderless and wishes everyone could travel more and meet new faces. “The world is my home, so in a way, I am never homeless.” His goal is for the whole world to become his family. 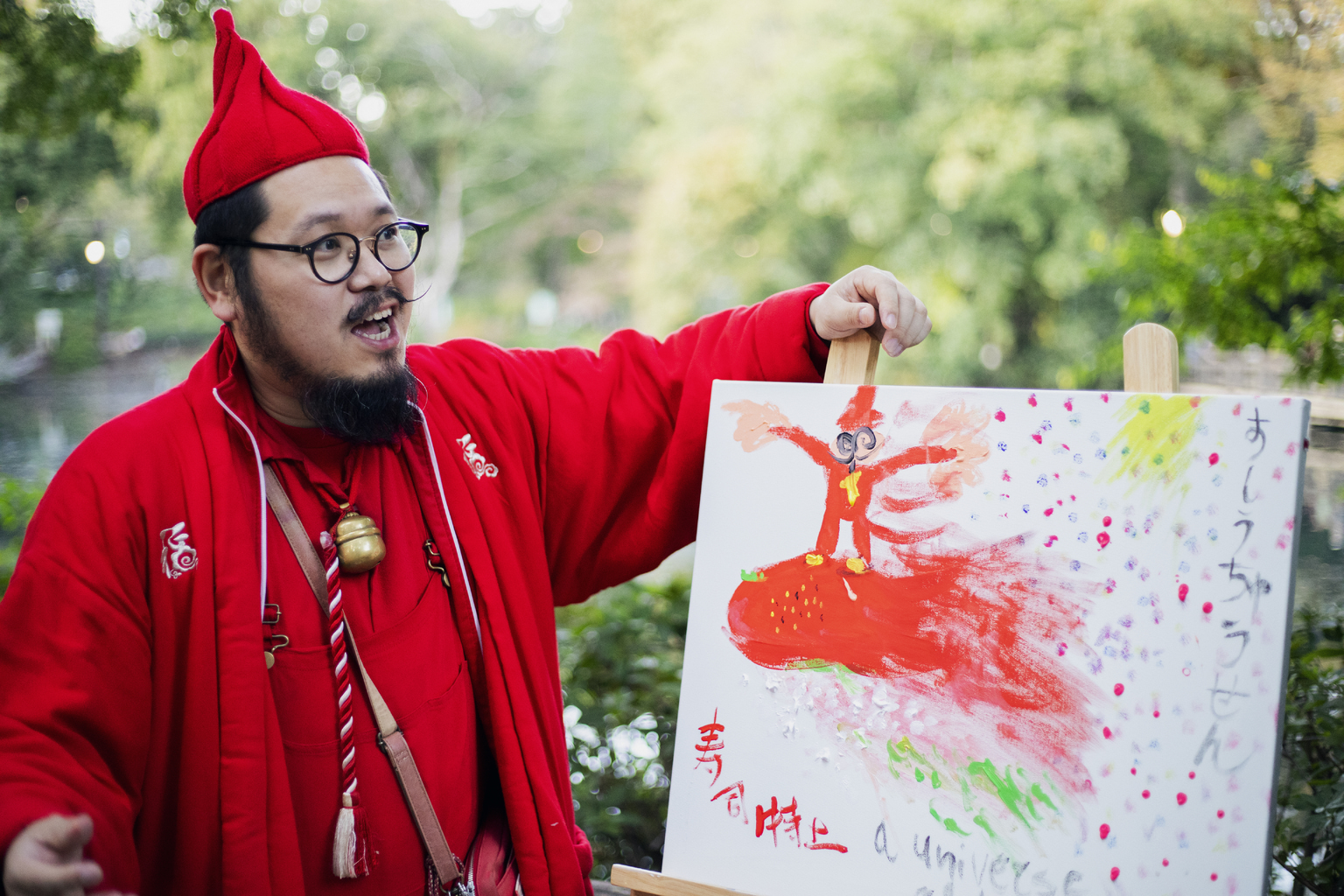 At the end of the day, we take a selfie with the ¥50 coin I give him, since he documents his life on social media. I ask him whether he wants to do comedy again, but he insists he doesn’t have any talent, hence he failed at it. “Maybe you have talent, but you didn’t have luck?” I offer. “Maybe, but luckily I became homeless,” he concludes.