Hatsumode, or the first shrine or temple visit of the new year, is the thing to do over the holidays in Japan

The New Year’s period is generally considered to be December 31-January 3, which is when millions of people usually make their annual pilgrimage to either their neighborhood shrine or temple, or to one of the major ones across the country. Here’s a list of the most visited shrines and temples across the country during this intense four-day period. The most popular shrine in Japan for Hatsumode barely needs no introduction — it’s a favorite with locals and tourists alike, thanks to its lush greenery and convenient location.

The shrine is dedicated to Emperor Meiji and Empress Shoken, although their tombs are located in Kyoto. Both were loved by the people and to commemorate them, volunteers from all over Japan and abroad donated over 100,000 trees and planted them to create a forest surrounding the shrine, which now, along with gardens, a treasure hall and a martial arts hall, covers 700,000 square meters of prime Tokyo real estate. Kawasaki Daishi Heikenji Temple is known for its power of warding off evil, making it an attractive stop for people who want to start the new year with a clean slate. Along with Naritasan Shinshoji Temple (the next one down on this list) and Yakuo-in Yukiji Temple in Hachioji, Kawasaki Daishi is one of the biggest temples of the Chisan School of the Shingon sect. The temple dates back to 1128, when Buddhist priest Sonken and Kanenori, a former samurai, constructed it together. Perfect for a quick stop on your way out of the country (or when you’re coming back) due to its proximity to Narita Airport, Naritasan Shinshoji is — along with Kawasaki Daishi (above) — one of the largest and most important temples of the Chisan School of the Shingon sect. It was founded over 1,000 years ago, but reached peak popularity during the Edo period, when it hosted kabuki plays which became wildly popular among Edoites.

If a quick stop to the temple isn’t enough, check out our guide to spending a day in Narita city. One of the most popular tourist destinations in Tokyo, Sensoji is the city’s oldest temple, and easily its most famous. It was founded in 628 and many believe that Asakusa Kannon enshrined here has the power to bestow fortunes on the Earth. Popular year round, Sensoji boasts about 30 million visitors a year, with a tenth of those arriving during the New Year period. Since this is one of the busiest times of year for the temple, it’s also one of the busiest seasons for the local rickshaw drivers. If you want to experience a rickshaw ride during this time, it’s best to book in advance. Another heavyweight in terms of international recognition, Fushimi Inari Taisha is the head shrine of roughly 30,000 Inari-style shrines across the country. People come to this iconic shrine to pray for bountiful harvests, prosperity in business, as well as the safety and well-being of family members. Fushimi Inari Taisha is actually made up of five different shrines, each dedicated to a different deity. This is the main shrine of all roughly 2,300 Sumiyoshi shrines, including the one you’ll find in Tsukuda, Tokyo. The three enshrined deities are known to protect the nation, seafarers, and promote waka, a 31-syllable form of poetry. Because of this, the shrine enjoys popularity from a broad demographic: everyone from fishermen and scholars to military officials can feel at home here. Sumiyoshi Taisha is also featured in the world’s first novel, The Tale of Genji. Atsuta Jingu is known as a protector of agriculture. Also, more notably, it’s home to the legendary Kusanagi sword, a magical sword handed down to humans from the gods after being found inside the corpse of an eight-headed dragon. While the lines between historical facts and legend are a little bit blurry, the sword is said to be enshrouded in the inner shrine. Atsuta Jingu is also famous for being instrumental in Nobunaga Oda’s victory at the battle of Okehazama in 1560, which wiped out the Imagawa clan and established him as a powerful Sengoku period lord. To show his gratitude to the gods for his victory, Nobunaga Oda had a mud wall constructed that still remains there today. Hikawa Shrine is one of the oldest shrines in Japan, reportedly founded over 2,400 years ago. It’s the head shrine for about 280 other Hikawa shrines, mostly located in the Kanto region. The shrine complex is located in a vast area of greenery, which includes three sport stadiums, a zoo, a museum, and multiple parks. Hikawa Shrine is dedicated to three kami, including Susanoo no mikoto, the sun goddess Amaterasu’s mischievous brother. 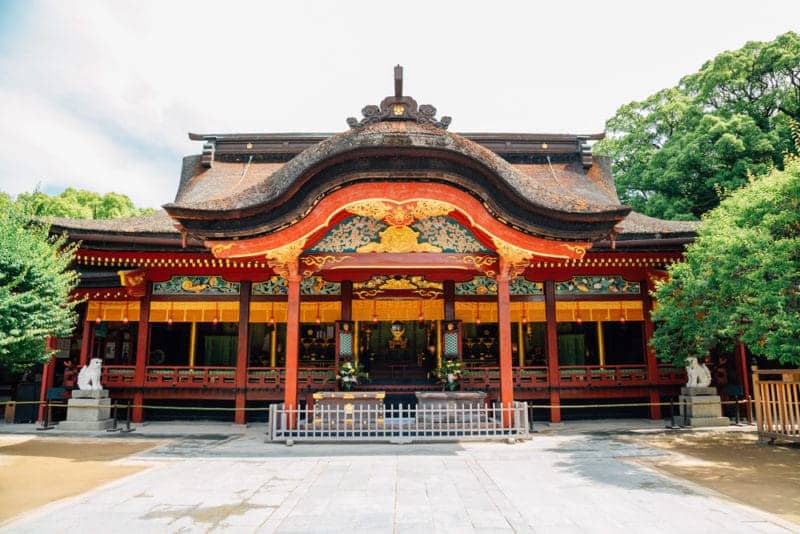 This shrine is dedicated to the deified scholar Michizane Sugawara, a government official who was slandered and exiled from his home region in the late 800s. The first shrine built in his honor was constructed on top of his grave and completed in 905, two years after his death. The current main shrine building dates back to 1591 (it was rebuilt multiple times due to fires) and is an exemplary structure of the Momoyama architectural style. Around 6,000 plum trees of almost 200 varieties decorate the shrine grounds, planted in honor of the deified Michizane, who was supposedly so fond of them he constructed a waka poem dedicated to them when he was only five years old. His scholarly pursuits in his life continue on in death, as he is now a god of calligraphy and literature.

If you plan on visiting any shrines during the New Year, please maintain social distancing measures and avoid crowded places to prevent the spread of Covid-19. Be sure to brush up on your shrine etiquette before you go and make sure to keep warm while you wait in line! Also, why not get a goshuin stamp or buy an omamori to mark the occasion of your visit while you’re there?