From bus tours to bullet trains there are various ways to travel around Japan. However as you zoom through the Japanese countryside from the seat of a bullet train or glide around Tokyo on a specialized bus tour, you’ll realize that there are a ton of areas in Japan not-so-accessible by public transportation. For these areas, a more tactical mode of transport will be necessary – the bicycle.

Although around 14 percent of Tokyoites travel by bike, there is a multitude of cycling routes and tours all around Japan. In order to find information about these scenic destinations, cyclists can use the services of Global Mobile, which offers both pocket WiFi and unlimited prepaid SIM cards that can easily help you stay connected anywhere in Japan.

From Hokkaido to Kyushu, here are some of the most beautiful cycling tours around Japan.

If you have never visited the Imperial Palace in Tokyo, or want to see it again at a different angle, then hop on a bicycle. The quick 3km loop around the Imperial Palace is the perfect location for a Sunday morning ride. Most Sundays the roads around the palace are actually closed to cars, making it a great location for a carefree ride. Normally four or five lanes of traffic are open to cyclists, making it a relatively easy place to have a ride and maybe even make some cycling friends while you ride. The loop is relatively short, as such its easily customized for any level of fitness.

Access: Exit Tokyo Station on the west side and continue west until you arrive at the Imperial Palace.

For those wanting to experience a more traditional Japan, take a ride though Kamakura and marvel at the ocean views at Yuigahama Beach. The cycling views are only matched by the numerous historic locations one can stop off at as they ride, Myohonji Temple and Kamakura Daibutsu are just a few locations one can visit on this route. Usually less crowded than the Imperial Palace, this Japan-by-bike experience is easily accessible and fun for all levels.

Access: From JR Kamakura Station, head south for Yuigahama Beach or west for the Kamakura Daibutsu, continue west along the beach for the best ocean views.

Many visitors to Japan only get to catch a glimpse of Mount Fuji through the window of a bullet train. Cyclists on the other hand have the opportunity to bask in Fuji’s glory during a bike ride around part of Lake Yamanakako, the largest lake of the Fuji Five Lakes region. Lake Kawaguchi is the most accessible from Tokyo and offers a more challenging cycling tour, but Yamanakako’s 14km trail dedicated to cycling offers more peaceful nature and scenic views of Mount Fuji, as well as sports parks, public hot springs baths and quaint cafés.

Known for its population of sacred deer, Nara is visited by thousands of tourists a day in order to catch a glimpse of the wild deer and visit the third largest Buddha in Japan at Todaiji Temple. However, away from the deer park and the bustling tourist zone, Nara is host to some amazing bike routes. Two of the best places for cycling in Nara are Asuka and Kashihara, located a short train ride from Nara Station. Riding from Asuka Station is beautiful with otherwise unvisited temples, shrines and amazing views of the Japanese countryside including rice fields, fields of flowers and, when season permits, cherry blossoms.

This popular route takes you around the base of Mt Yotei, an active stratovolcano located in Shikotsu-Toya National Park in Hokkaido. Approximately 55km long and requiring around 3-and-a-half hours to finish the entire route, this route, while quite lengthy, isn’t difficult by any means. The route consists of mostly flat roads and doesn’t contain many steep hills, making it accessible for riders of any level. From the route, one can see and stop off at various onsen, waterfalls and other picturesque bodies of water. The route also has amazing views of the Hokkaido countryside including massive fields of flowers, rice fields and of course the giant mountain of which the route circulates.

Access: The route starts and ends at Kutchan Station. From Sapporo station simply catch the Rapid Airport 111 Line to Otaru Station and then change to the Hakodate Line which will take you all the way to Kutchan Station 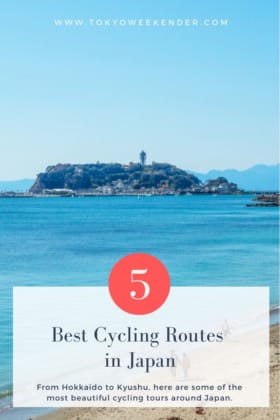