Halloween in Japan is a big deal. It’s loud, cheerful, and its colorful parade of inventive costumes never fails to make you painfully aware just how creatively and artistically stunted you really are (and that’s why so many people drink heavily during the holiday). But one can argue that it’s not exactly scary, which seems like a problem during a day built around scares. To help remedy that, here are seven Japanese horror films perfect for helping you regain your Halloween spirit:

Based on Lafcadio Hearn’s collection of classic Japanese ghost stories from the early 1900s, Kwaidan is actually four unconnected short horror movies deeply steeped in Japanese traditions. But while their settings and esthetics might be from over a century ago, their messages ring true even today, like the Kurokami (~ “Black Hair”) story, which is ultimately a tale about love being more important than money with a disturbing twist. Kwaidan works so well because it taps into universal truths that transcend borders, and then uses them to scare the sleep out of you while also inadvertently teaching you about a foreign culture by virtue of its setting. It is the perfect definition of a Japanese-style horror movie.

Horror crossovers have historically been a mixed bag, from the clunky and uneventful Alien vs. Predator to the mostly OK Freddy vs. Jason, the latter of which only worked because it took a slightly comedic approach to the story. Sadako vs. Kayako, which pits the uncombed antagonists of Ring and The Grudge against each other, thankfully has none of those problems.

It’s not that the mixing of two famous Japanese murder-ghosts is greater than the sum of its parts. Rather, the movie is worth a watch because it allows both Sadako and Kayako to shine and play to their strengths without the story turning into a parody of itself. Sadako vs. Kayako is essentially Ring and The Grudge in one, time-saving package with some very impressive special effects. And that’s more than enough.

The movie is reportedly the result of director Nobuhiko Obayashi being asked to make a creature feature in the style of Jaws where he ultimately replaced a killer animal with a killer house. House is often described as a comedy horror but it’s probably closer to a distorted fairy tale where protagonists identified only by nicknames like “Gorgeous,” “Fantasy” or “Kung Fu” get attacked and devoured by everything from a fantastical haunted house’s piano to an old mattress. And yet, the movie manages to remain unnerving at all times, and will stay with you well until bedtime as you suspiciously eye your room, wondering when it will finally move against you.

Helter Skelter, based on the excellent manga by Kyoko Okazaki, is something of a body-horror story without the body horror. It centers around the supermodel Lilico who undergoes full-body plastic surgery which makes her outside beautiful but also rots her on the inside. The story is very much a commentary on the beauty industry, vanity and the emptiness of fame, and mostly doesn’t feature typical horror elements. Yet the psychological aspect of it like Lilico’s manipulation and the ruined lives she leaves in her wake make the movie terrifying because of how deep they take you into the mind of a malicious, broken person.

Also known as Spiral, Uzumaki is based on a manga of the same name by Junji Ito, the father of modern Japanese comic book horror. Ito has been recognized internationally for his unsettling stories featuring creative body mutilations, and Uzumaki doesn’t disappoint in that regard. This is a very visual horror with disturbing things constantly happening to human flesh in a town taken over by a mysterious force that makes everyone obsessed with spiral patterns.

At the same time, there is another layer of horror to Uzumaki, one closer to the Cthulhu mythos, concerning ancient evils that take over the minds of humans, from which we cannot escape. Uzumaki is both a gory and psychologically terrifying assault on the senses, which won’t let you forget it any time soon.

Most “best Japanese horror films” lists include the supernatural Ring (1998) and the psychological/torture scare fest Audition (1999) by the comedically violent auteur Takashi Miike. One Missed Call is something of a violent, spiritual amalgamation of the two.

Directed by Miike, OMC feels like the director’s take on the Ring formula, which is replaced by voicemail messages from the future predicting a person’s death. In familiar Miike style, things get very gory from then but what makes the movie really work is supplementing the supernatural story with elements of everyday Audition-esque human evil that the director is known for. By basically taking the essences of two Japanese horror classics and reshaping them into something new and exciting, One Missed Call more than earns its spot on the list.

Kiyoshi Kurosawa, the director of Cure, is one of the most important voices in Japanese horror, and Cure is the obvious reason why. In short, it’s a masterpiece that plays homage to a wide variety of genres, including German Expressionism, while never losing focus of its mission: to unnerve the audience.

This is achieved through various means, from a slow-boil mental deterioration of Detective Takabe who is investigating a series of strange, gruesome murders, to the unreliableness of our own eyes as reality mixes with psychosis and the very nature of free will is called into question. Indeed, the film’s ultimate appeal is its ability to leave you feeling confused and unnerved without resorting to too much gore, which has always been one of the most defining characteristics of Japanese horror. And, well, Cure simply does it better than any other movie out there. 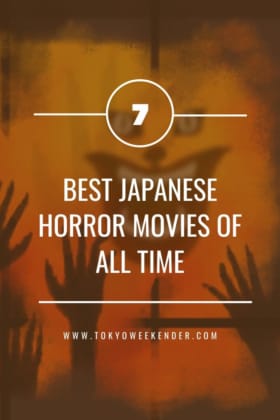