“We Are the Punk Group of Awa Odori”: Kasumiren Puts a Twist on Japan’s Traditional Bon Dance

“I like to think of us as the punk group of awa-odori,” grins Nick Christian, just half an hour before he’s due to perform at Earth Day festival in Yoyogi Park. “We’re very avant-garde, right?”

Haruhiko Fujise nods in fervent agreement. Fujise heads up the dance group Kasumiren that, dressed in white with vivid stripes of red, green and black, takes part in the annual Awa Odori festival in Koenji.

Every August, around one million spectators flood to this corner of northwestern Tokyo to watch groups of performers known as ren weave their way through the streets. Dancers move in choreographed sequences, alternating between faster and slower movements, accompanied by musicians on shamisen lute, taiko drums, shinobue flutes and the kane bells. It makes for a mesmerizing visual and aural scene. Could there be a better way to welcome the summer? The tradition hails from the city of Tokushima in northeastern Shikoku, and is said to have a history stretching back more than 400 years. There are various theories about how Awa Odori came to be, from celebrating the completion of Tokushima Castle to an offshoot of the prayers offered during the Obon period when ancestors’ spirits are said to return to this world to visit their relatives.

Fast forward to 1950s Koenji. Local residents were debating the idea of borrowing a traditional festival as a town regeneration strategy and, for reasons lost to history, struck upon Tokushima’s Awa Odori. In 1957, the inaugural Koenji Baka Odori (Koenji Fools’ Dance) was held and, over time and with some study, the event developed into a more authentic Awa Odori. While Koenji might never have developed into the lively shopping destination originally envisioned, 160 groups with around 10,000 dancers in total now take part in this annual celebration.

Within the history of Koenji Awa Odori, Kasumiren is relatively young. Fujise had been living in the area for around two decades and, every year, he wistfully thought about getting involved with the festival. In 2006, he finally took the leap and established Kasumiren with friends, first playing taiko (drums), before taking on the role of the kane bell, which controls the speed of the dance. 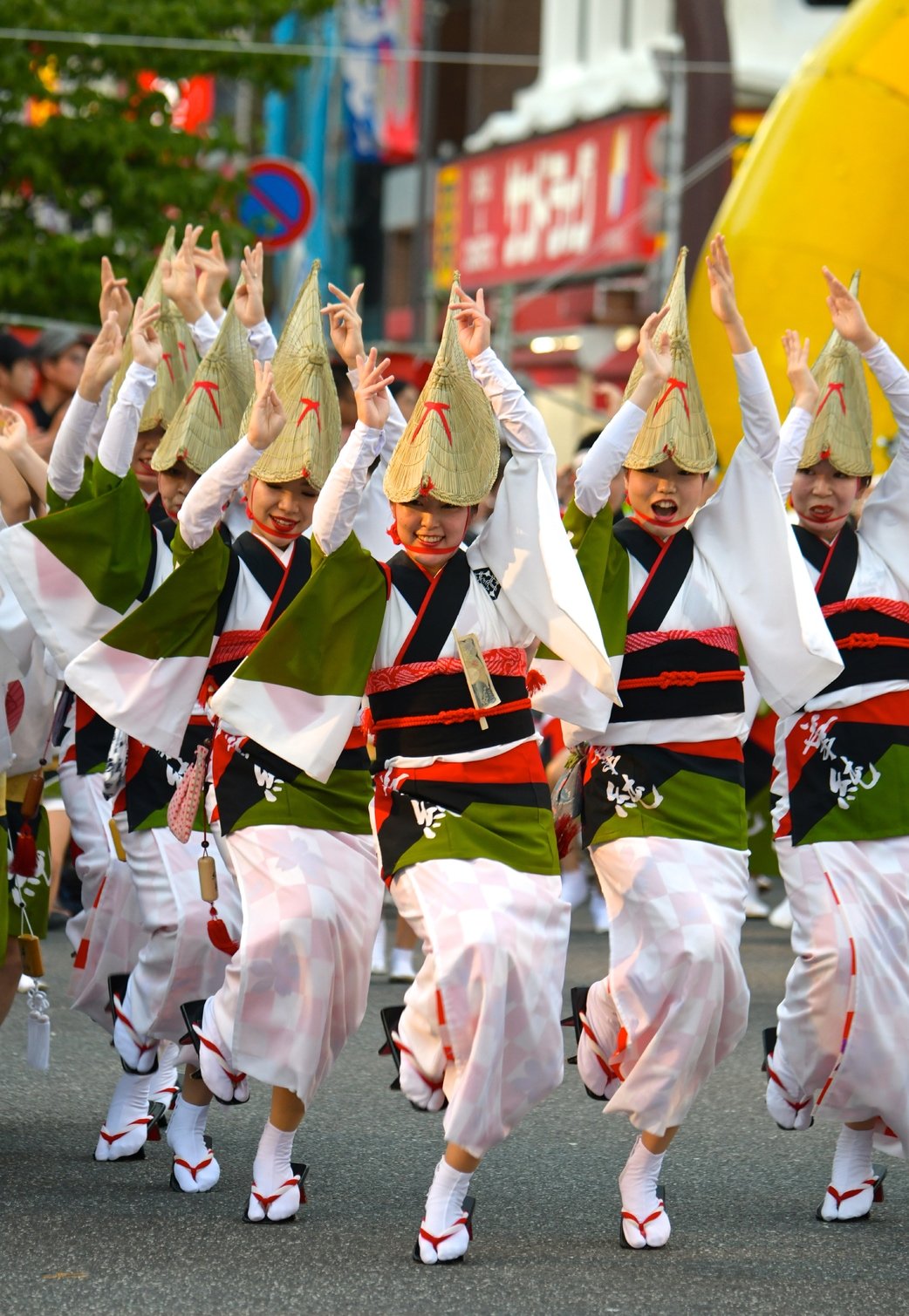 “Us lot, we’re noisy!” says Fujise, laughing. “Within Awa Odori, many groups have a different direction when it comes to their style, for example, the kind of rhythm or the kind of dance. But if you don’t have any interest, they are all going to look the same.”

Kasumiren pride themselves on being fast and loud, with fierce movements. They also perform sashi-odori (stabbing dance), pointing their toes and stabbing downwards as they move forwards. It makes for a striking scene and this vigorous energy is reflected in their name, which means to put on a pure and brilliant performance.

The group began with a modest 15 members, but grew to 100 – the maximum that can perform per ren in the Koenji festival. Among their numbers, the youngest is three years old and the oldest is 80.

“I said I used to play the saxophone and so they passed me a flute. I managed to make a noise, and they said, ‘Okay, turn up at practice next Saturday’”

Families, students, those who have retired – anyone and everyone can join. For Nick Christian, who at first didn’t know much about the festival, it was a chance meeting in a bar that got him involved. Drinking after hours with the owner, some members of Kasumiren turned up, believing the place to still be open. In what he describes as typical of the Koenji neighborhood, the late-night socializing continued. “They asked me what I could do,” Christian explains. “I said I used to play the saxophone and so they passed me a flute. I managed to make a noise, and they said, ‘Okay, turn up at practice next Saturday.’ So I did, and I think they were surprised.” The group also has an unusually high ratio of women to men at around 70 percent. “It’s quite funny,” says Fujise. “We recruit new members online and get a lot of new people through that. Many women will apply alone. But men won’t apply online. They have to be introduced by a friend or someone. Women make more of an effort. They are happy to ask to join alone but few men do that.”

“We have to create something for a new era”

Kasumiren practices 60 times a year and performs at all kinds of events and festivals, not just the Koenji Awa Odori. They also collaborate with musicians and experiment with new styles. Fujise admits some believe that ren should stick to traditional methods, but he wants to explore a new path. “Of course, we practice the traditions and the traditional way, but I also think it would be nice if people could experience something different. We come at it from the perspective that we have to create something for a new era.”

As for those not familiar with Awa Odori, Fujise has one message: “You need to see it live to feel it. Don’t just watch it on YouTube. Even if it’s not your thing, you will feel it.”

Koenji Awa Odori is usually held on the last weekend of August, unfortunately the 2021 festival has been cancelled.