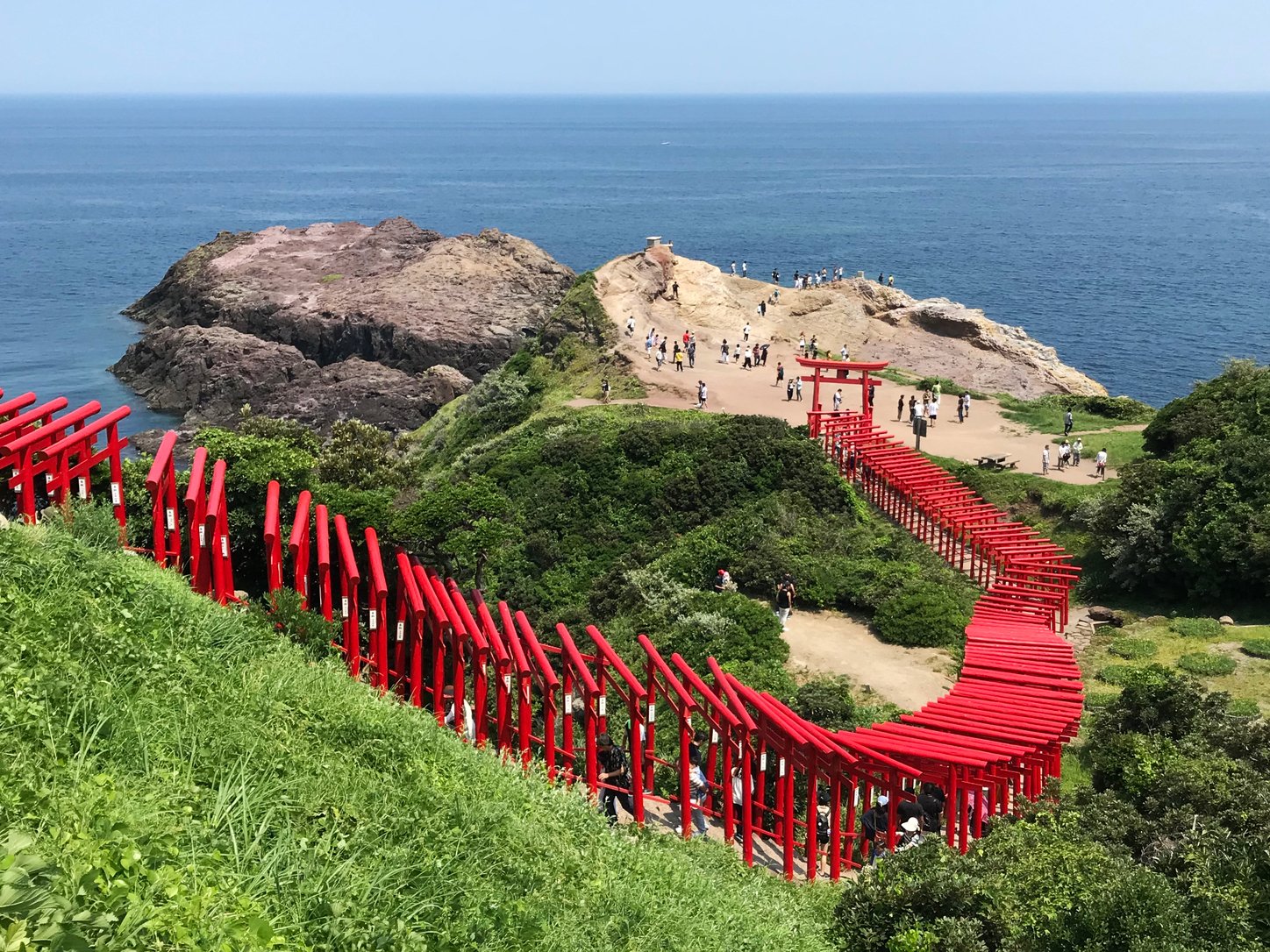 Even though it recently made our list of top 10 prefectures people are least likely to visit, Yamaguchi Prefecture offers a surprising amount of sightseeing spots and tourist destinations worth checking out. Located at the southwestern tip of Honshu, Yamaguchi is the last stop west before reaching the island of Kyushu, which makes it easy to overlook. Yet the homeland of current prime minister Shinzo Abe, UniQlo founder Tadashi Yanai and Dassai Sake is worthy of being a household name. Here’s a few noteworthy Yamaguchi vacation hotspots. Yamaguchi Prefecture has shinkansen stations at both Shin-Yamaguchi and Shimonoseki, but even the high-speed train ride from Tokyo takes nearly five hours. The flight from Haneda Airport to Yamaguchi Ube Airport is 95 minutes. The popular destinations are accessible by public transportation, but a car rental is the best way to navigate Yamaguchi. Disembarking from the plane in Ube, make your first stop Tokiwa Park. Coming from Tokyo, this park with a large lake at the center and a botanical garden that stretches along two kilometers of coastline is a literal breath of fresh air. The Tokiwa Zoo is well worth a visit as the active, healthy animals are kept in their natural environments. There aren’t any big animals here – unless you think an alpaca is big – but there is a large variety of monkeys, and the South American capybara is the king of this jungle. One nice thing about Tokiwa Zoo is the information is provided in flawless English (a common theme throughout Yamaguchi). Did you know in the 17th century the Catholic Church in Venezuela classified the capybara as a fish so they could eat the world’s largest rodent during Lent? There are more than 450 limestone caves throughout Akiyoshidai Quasi-National Park within which fossils of ancient rhinoceros, elephants and tigers have been discovered. The Akiyoshido cave in Mine, the largest underground cave in Japan, is up to 100 meters wide and has nearly 9 kilometers of passages. A well-maintained, one-kilometer-section of the cave is open to the public, with a portion being wheelchair accessible. Subterranean highlights include a towering stalactite called the Gold Column and the ethereal rimstones called The Thousand Rice Fields. You follow an underground river for most of the course, and depending on which entrance you start from, you will spill out into the sunshine alongside a cascading waterfall. Again, useful information in English is found throughout the site. Near the north entrance of the Akiyoshido cave is this scenic lookout that provides panoramic views of Yamaguchi’s rare geologic formation called karst plateaus. Hundreds of millions of years ago this area was submerged under the sea. During a period of dramatic geologic change, the limestone reef was thickened by overfolding, creating the rolling plateaus pocked with teeth-like limestone pinnacles – up to two meters in height – that we see today. For centuries the local tradition has been to control-burn the plateau’s foliage to prevent large fire outbreaks, thus there are no trees and the view is unobstructed. The area is covered with hiking trails, and the locals hauling equipment in pickup trucks seem to know where to do some serious off-road mountain biking. If you are traveling with kids, then this is a must-see attraction. Feed lions, zebras and ostriches from the comfort of a safari bus. At the petting zoo, hand-feed kangaroos, horses and goats. Just north of Akiyoshidai Quasi-National Park, Safari Land is a safari-style zoo and amusement park. Hop on a fun, animal-themed bus for a tour of the park grounds where, in addition to the aforementioned ostriches, fierce creatures such as tigers and bears get up close and personal. Be sure to keep your receipt, because after the bus tour you can drive your own vehicle along the same route. Everywhere in Japan has a local specialty. It’s usually some random shellfish or root vegetable. For example, in Hokkaido every meal includes the local specialty – sea urchin. There’s only so much neon orange goop one can eat. Yamaguchi is no different, as the local specialty happens to be the poisonous pufferfish. Most kaiseki meals include crispy curls of pufferfish skin. The local seaweed is also considered a delicacy, and most meals in Yamaguchi come with healthy doses of nori. Bucking the trend however, Yamaguchi also has delicious, yummy kawara soba. This heartwarming dish was invented by traveling samurai who wanted to cook a quick meal on the go by baking wild grass and meat over clay roof tiles – called kawara. These days the soba noodles are infused with green tea – though some restaurants use wasabi – and the baked noodles, which have a nice crunch, are topped with a range of ingredients. Depending on the restaurant it could be stewed pork, scrambled egg, grilled fish and, of course, seaweed. Dump green onions and squeeze a fresh lemon into a bowl of ponzu for a refreshing dipping sauce. Make sure to imbibe plenty of Yamaguchi-distilled sake as every bottle of the local spirit is lip-smacking good. 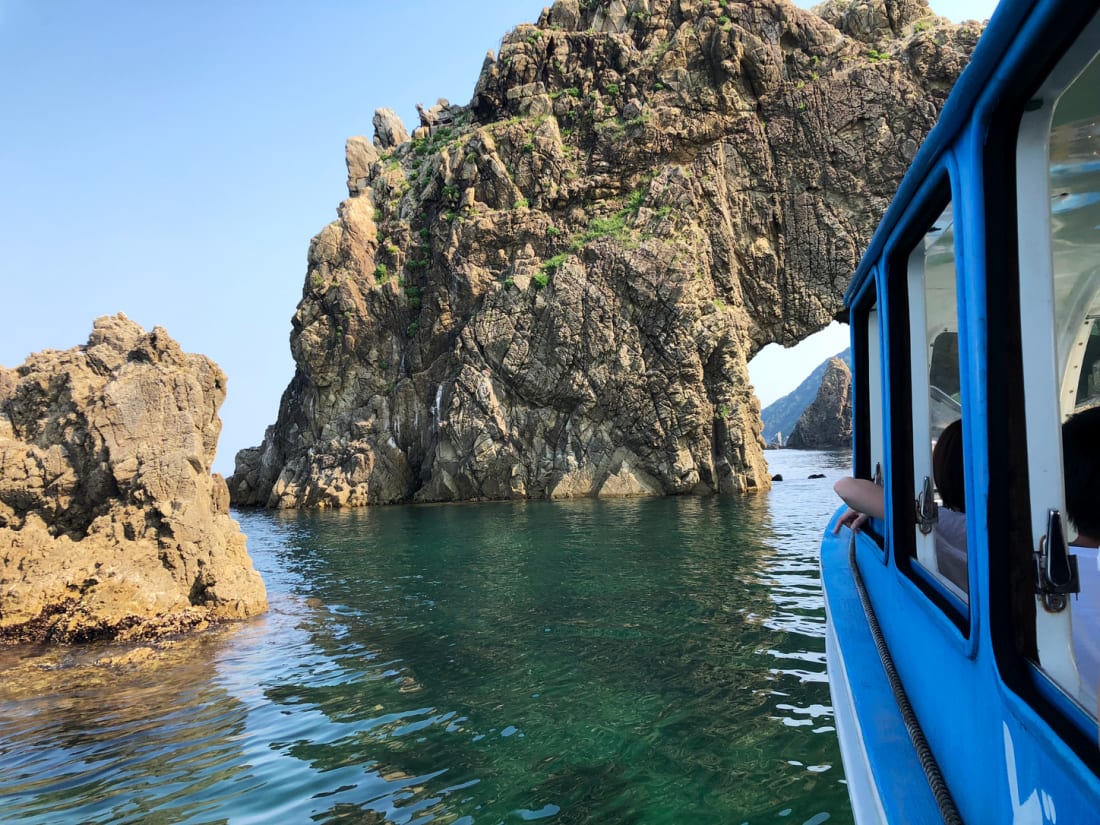 Bellies full, head to Yamaguchi Prefecture’s scenic north shore. The coastal city of Hagi is known for its well-preserved samurai district, while nearby Omijima Island is a hotbed of outdoor adventure. Part of the Kita-Nagato Kaigan Quasi-National Park, the ocean-carved, monolithic rocks have earned Omijima the title, “Alps of the Sea.” The island’s geography makes it a popular destination for all-season scuba diving, and a secluded campground offers a nice respite. For a quick tour, board the Omijima ferry for a 90-minute pleasure cruise around the island and see the tunnels and cliffs up close and explore the island’s hidden grottos. There are thousands of Inari shrines throughout Japan. Dedicated to the Shinto god of rice, Inari shrines are recognizable by the red torii gates at the entrance, with Kyoto’s Fushimi Inari Shrine being the most iconic. Heading west along Yamaguchi’s north coastline brings you to one of the prefecture’s most scenic and well-known spots, the Motonosumi Inari Shrine. The 123 red torii gates that lead from the cliff’s edge to the water’s edge were built in 1955 after a local Nagato resident received a divine message from a white fox. Follow the 100-meter path through the red gates to the seaside. When the sea is rough, the waves crash against the rocks, forcing water through erosion-carved holes. The gush of spray is called “dragon palace geyser.” The view here is amazing, and you won’t be jostled by crowds of fellow tourists fighting for the perfect photo spot. For a more rural prefecture, the infrastructure throughout Yamaguchi is astoundingly modern. Whether this is because Yamaguchi is the home base for Abe and other former prime ministers is a discussion for another day. In the meantime, a road trip across Tsunoshima Bridge in Shimonoseki is simply delightful. Nearly 2 kilometers in length, the expanse is the second longest bridge in Japan connecting the mainland with an isolated island. The view of the bridge from Amagase Park is a romantic date spot. Head to the island of Tsunoshima itself for a tropical escape. The white sand beaches have a laid-back atmosphere and the crystal blue waters are a fun escape.