TW writer Cezary Jan Strusiewicz goes inside the world’s first cyber maid café, Akiba Zettai Ryoiki A.D. 2045, and gives us the highlights of what to expect… When one of the waitresses, Miyuki, introduces herself as a two-year-old robot cat, I know I’m in for one unforgettable experience at Tokyo’s latest maid café. Akiba Zettai Ryoiki A.D. 2045, which styles itself as the world’s first cyber maid café, opened its doors in March 2019 in Akihabara, Tokyo’s home ground for concept restaurants where waitresses dress as maids and treat customers like masters supping in their own home. It’s also where the idea seems to have run its course, with people demanding more variety in their kitsch dining experiences. It was just a matter of time before someone created a sci fi-themed maid café in the geek capital of Japan.

That’s how Akiba Zettai Ryoiki A.D. 2045 came to be. And they’ve done more than slap a futuristic theme on an old concept. They’ve created an internal mythology where the maids aren’t maids but, in fact, robot cats. Situated above a ramen restaurant, the café’s locale reminds me of Harrison Ford’s character Rick Deckard in Blade Runner sitting down to some noodles in the film’s opening scenes. The café’s neon decor and screens showing CG music videos further cement the comparison. Yousuke Yamamoto, who runs the café, explains it’s not a coincidence… 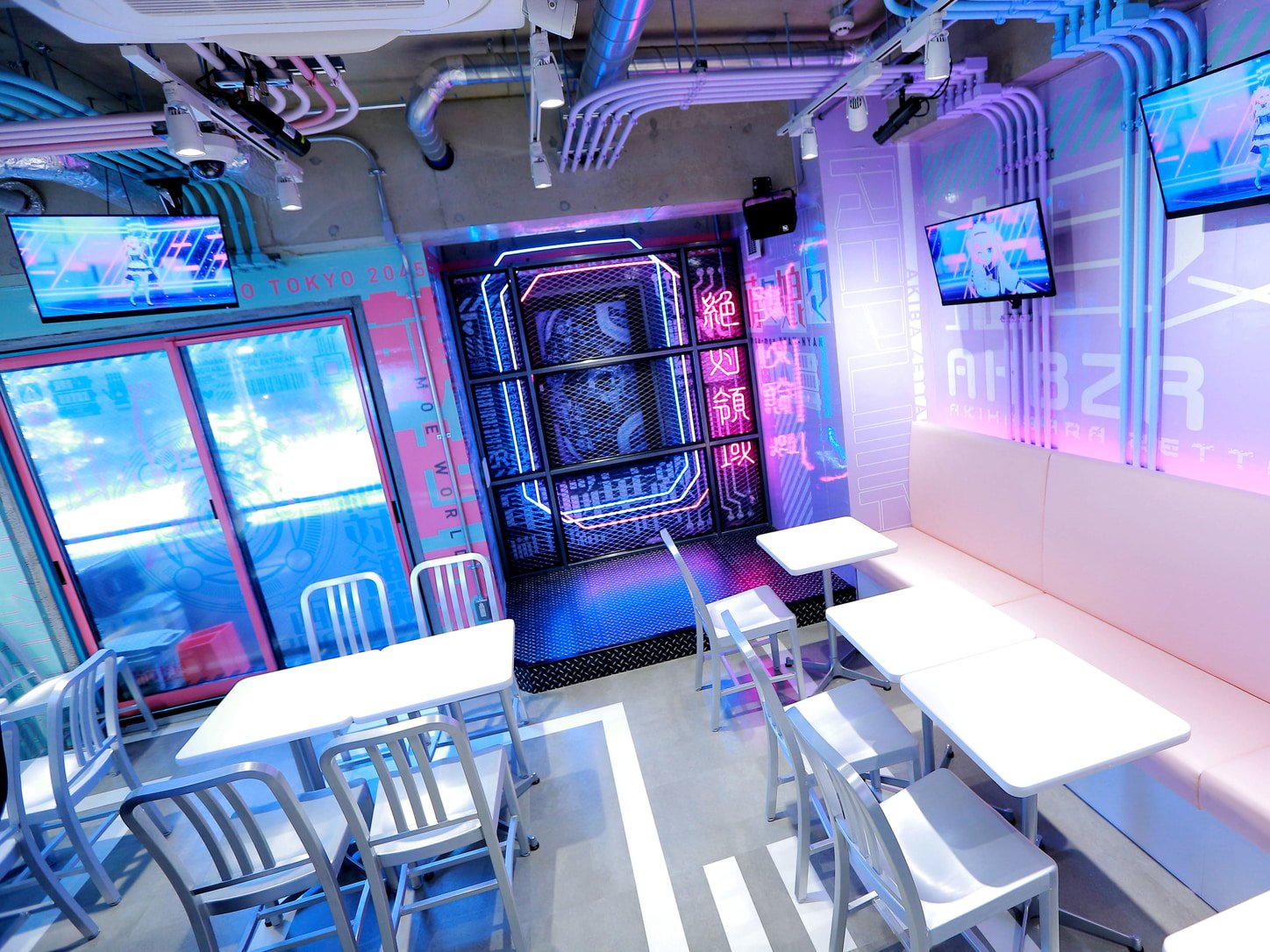 The theme of this café is the not-too-distant future year of 2045. “We thought it was very fitting given Akihabara’s geek image and all,” says Yamamoto. “There are a lot of fans of cyberpunk culture here so we’ve drawn a lot of inspiration from movies like Blade Runner and Japanese anime like Ghost in the Shell.”  While the interior design reminds me of the cantina aboard the Nostromo from Alien, the pastel color scheme creates a pleasant mix of science fantasy and the Japanese kawaii aesthetic. “This was very much by design,” Yamamoto tells me. “We were worried that if we went too cyberpunk, it would end up uninviting. We can’t have that in a maid café.”

But what exactly makes Zettai Ryoiki A.D. 2045 a “cyber maid café”? To find out, I talk to the cat-eared maid, Miyuki. “The difference between regular maids at a maid café and us cyber maids is that we are cat-shaped pet robots from the future. Other cafés have regular humans working at them. But we have always been cat robots,” Miyuki explains, not breaking character once.

“So, if you were a guest visiting us for the first time,” Miyuki continues, “I would greet you by saying: ‘Hi, my name is Miyuki, nice to meet you,’ in English. Then I would explain that we are actually cats, not humans, and that the guest is our master. Then I’d ask you to close your eyes and I would cast my special meow-meow magic and put a pair of cat ears on you, turning you into a cat, which is a power we all have. Then we would move to the menu.” A look at the menu finally sheds light on what exactly I’m dealing with here. There is a legend inside explaining the origin of the café’s cat maids. Apparently, in the future, humanity develops humanoid robot cats for people who can’t keep regular cats because of allergies, etc. The NYABO robots develop intelligence and decide to serve the humans as thanks for all the times they played with them. But that’s not enough. They want to make humans even happier than that. “Hearing the cats’ wish,” as the menu explains, “the gods create a space in a certain town where the NYABO robots can give back to humans. The NYABO robots dance, serve their best meals, and provide other hospitality to please the humans. The space comes to be called ‘absolute domain’” – or “zettai ryoiki” in Japanese, which is where the name of the café comes from. At least, this is the etymology given by the café.

In reality, “absolute domain” is a euphemism for the area of visible thigh between a skirt and a stocking like you’d see with a Japanese maid uniform, even the more futuristic ones they have in the year 2045. And there are plenty of absolute domains on show here, as there are over 80 maids working at the café, though obviously not at the same time. “We have two teams of cats here: the day and night cats,” Miyuki says. “Today I’m a day cat and until 5pm I’ll be showing people around, drawing pictures on omelets, taking Polaroids with any master that wants a nice souvenir of their stay here, and so on. Then I will sing and dance on the stage. I really like singing the song by the ex-NMB48 member Watanabe Miyuki called ‘Warukii.’”

In the end, music is probably the biggest selling point of the Akiba Zettai Ryoiki A.D. 2045. The cafe’s food menu is surprisingly ordinary considering the setting. It’s mostly omelets, desserts and fried foods on rice. You can also order cocktail sets that come with a live performance by one of the maids doing their best idol impressions on the small, brightly lit corner stage. To their credit, they really get into it, as do their young male guests who clap, shimmy in their chairs, and genuinely have a good time – all the while acting like the cats they’ve been turned into. The music videos playing on the screens give off the same energy, showing an original CG animated character, Nia Shinomiya, whose moves were created via motion capture of an actual Japanese pop idol. Welcome to the future.