Japanese Fashion Through the Eras: From Heian to Heisei

As we welcome in the new Reiwa era this month, here’s a look back at Japan’s fashion history from kimono to kawaii… Early Japanese clothes were plain and practical, suited to a nation of hunters and gatherers, who later evolved into farmers and craftsmen. During the Heian period (794-1192) Japan’s most iconic garment, the kimono, was introduced. Women of higher social status would keep the majority of their skin hidden under several layers, with ladies of the Imperial Court sometimes wearing a complex kimono ensemble called junihitoe consisting of 12 or more layers, and weighing up to 20kg. Nobles later began to wear kosode, a basic robe that was previously worn under garments, together with skirt-like pants called hakama. 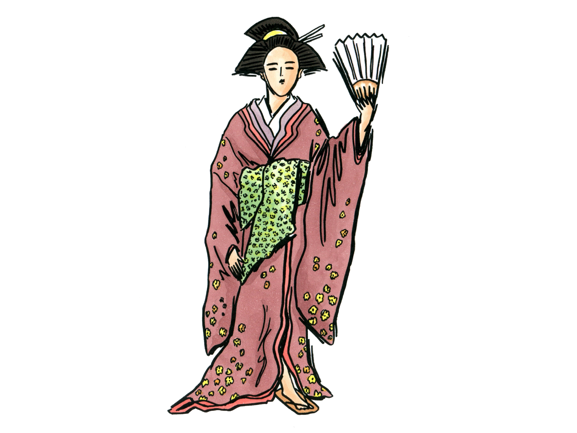 When the military government of the Tokugawa Shogunate came into power, Japan entered a 250-year period of stability and peace. Samurai became bureaucrats for feudal lords, requiring more presentable attire. The rising demand for elegant kimonos elevated the garments to an art form, worn as a show of power and status. As wealth began to spread to the merchant class so did arts and culture, including fashion. Developments in manufacturing and embroidery could now incorporate multiple colors, large motifs and asymmetric designs taking inspiration from extravagant theater costumes and famous artists. New looks of the era included loosely worn kimono, wider obi belts almost tripling in size, and long hanging sleeves commonly worn by unmarried women. 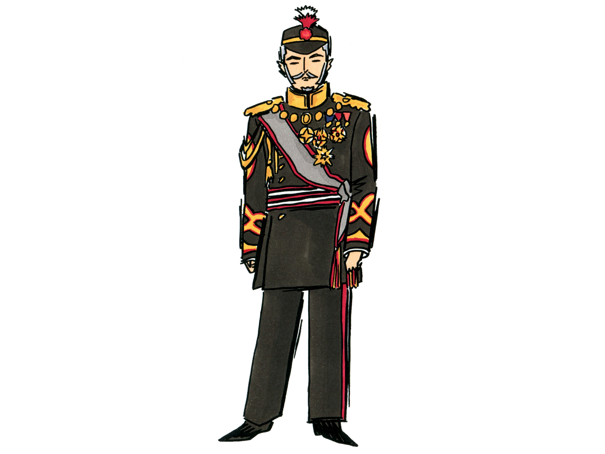 Following the Meiji Restoration, the Empire of Japan was restored, consolidating the political system under the emperor. The country emerged as a modern, industrialized and powerful nation, now taking influence from the West. Government officials and their wives were required to wear Western-style dress at work and formal occasions; the emperor himself cut his hair short and grew out his moustache. The uptake of yofuku (Western clothing) filtered down through the classes, however many women found the new fashions impractical for Japanese living and for decades to come it was still common for women to wear kimono, increasingly paired with contrasting accessories like hats, scarves, gloves, umbrellas and handbags. As the empire continued, modern living thrived. The dawn of radio, magazines and cinema inspired fresh styles such as decorated collars and new patterns in affordable meisen silk kimonos. The West and the East began to share trends and by the end of the 1920s popular women’s fashion had become similar across the globe, favoring a glamorous slim line with vertical draping in gowns, robes and dresses. However, the majority of adult Japanese women still favored traditional dress, with some experimenting with modern hairstyles and beginning to dress their children in pants, skirts, shirts and dresses. Meanwhile, men became increasingly accustomed to wearing coats, suits and caps. Under the reign of Emperor Hirohito, the Showa era spanned both pre- and post-war periods. Wartime restrictions banished showy outfits in favor of modest garments, but after the 1950s fashion trends developed rapidly alongside the economic boom. Kimono became primarily reserved for special occasions and Western clothing became mainstream. The post-war pacifist constitution (created in 1947) allowed younger generations to embrace popular culture and entertainment along with the fads and fashions of the day. Showa styles still had a Japanese element but often took inspiration from American and European influences such as Swinging-Sixties mods and dolly girls or long-haired, free-loving hippies. The rise of new media has led to fashion, art and music becoming increasingly intertwined, also enabling people to follow trends en masse or connect with their own niche. In addition, the hyper development of Japanese youth who are looking to the West but being raised in a homogenous society that still upholds national traditions has created distinct fashion tribes unique to Japan; tribes that are now influencing fashion across the world. Mixing old and new, East and West and other contrasting roots has created extreme hybrids that have both connected and subverted aspects of local and overseas cultures. Visual kei, gyaru, host club hairstyles, Lolita, decora, cosplay, genderless kei, otaku, kawaii culture and Harajuku street fashion are just a handful of Heisei’s aesthetic contributions.