The rainy season in Tokyo spans almost the entire month of June. For some people, the thought of battling crowds of umbrellas on a drizzly, humid day is enough to make them avoid going out altogether. But fear not – stray from Tokyo’s central area and you will be rewarded with magnificent, wide-open spaces splashed with every color under the rainbow. Put your rain boots on and head to these five spots outside of Tokyo which are known for their stunning gardens bursting with Japan’s rainy season flower: the hydrangea. The city of Hino on the western side of the Tokyo Metropolis is home to the historical and culturally important Takahata-Fudoson Kongoji Temple. According to ancient records, the temple was founded in the 8th century. It was originally built into the mountainside, but has been at its current location at the foot of the mountain since 1342. Thanks to its location on the outskirts of Tokyo, it remained untouched during WWII and much of the temple is now designated National Cultural Important Properties.

Popular during the New Year period in January and the Setsubun bean-throwing festival in February, the temple also draws nature-loving crowds in June when its forested hillside of hydrangeas explodes into a colorful mass. Scattered throughout the forest are also 88 jizo statues, inspired by the Shikoku 88-temple pilgrimage. With the sounds of monks chanting in the main hall, you can do your own mini pilgrimage through this hydrangea forest. 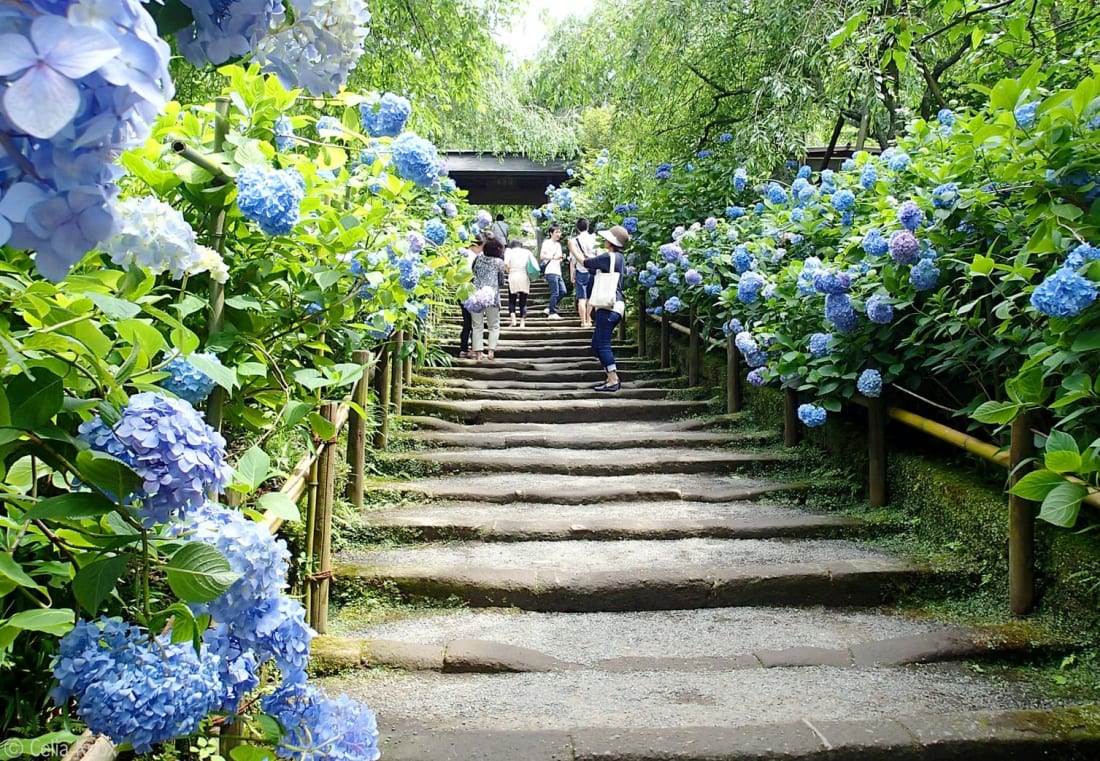 Located on the way to the Great Buddha statue, Hase-dera is one of the most famous temples in Kamakura. During the busy periods, only a certain number of visitors are allowed in at one time, so it’s common to have to wait anything up to three hours. But for those who do enter, a beautiful temple and garden awaits. The main drawcard of the temple is an 11-headed statue of the Goddess of Mercy that is said to have been carved from a camphor tree in Nara in 721 AD. After being thrown into the sea, it apparently washed up on the shore near Kamakura, and Hase-dera was erected in honor of it. Behind the temple buildings is a hillside garden of 2,500 beautiful hydrangeas. Visitors can follow the paths past flowers of all colours and shapes, and also get a picturesque view of the seaside town and Sagami Bay below. 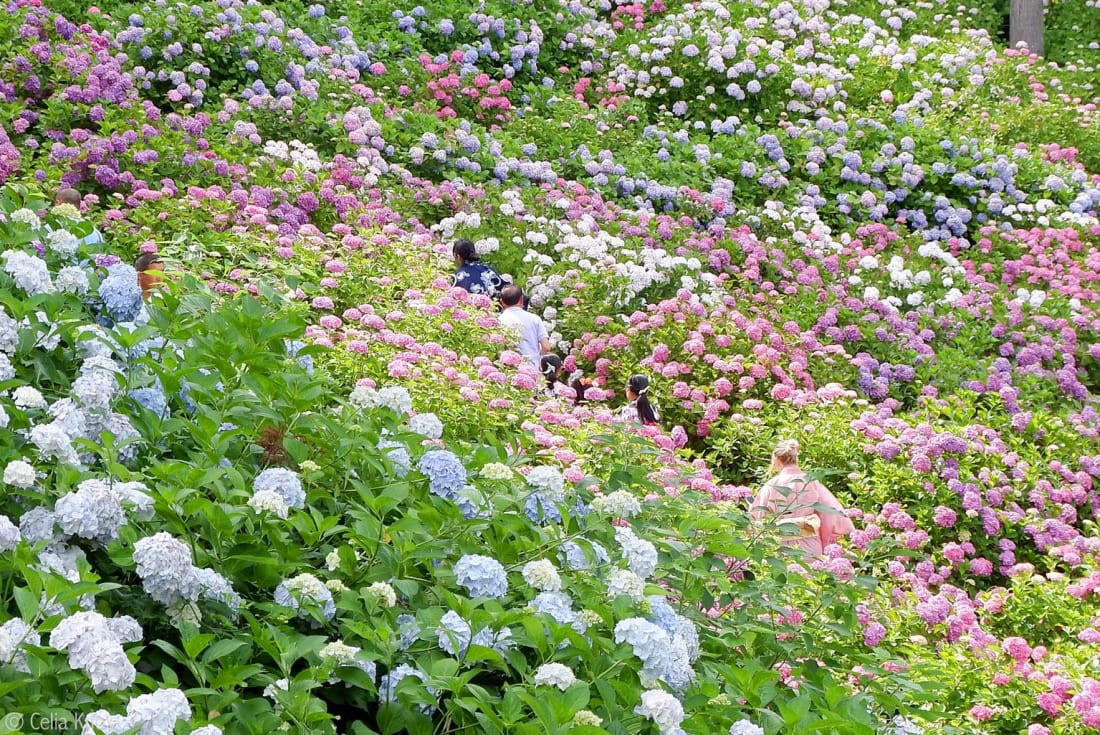 Known as Hattori-noen Ajisai-yashiki in Japanese, this unassuming house amid the farming lands of Mobara features a jaw-dropping landscape garden. Since the early 1990s, each June the owners have opened their doors to let the public experience the splendor of 300 varieties of hydrangeas. Covering an entire hillside around the house and up to the wooded ridgeline, more than 10,000 shrubs create a spectacular wall of blues, purples, reds, pinks and whites. A labyrinth of steep paths and stairs give visitors a view of the garden from all angles, and two shelters offer a place to rest and enjoy being completely surrounded by hydrangeas. At the entrance, visitors can buy locally grown fruits and vegetables and rare hydrangea-related products like hydrangea namagashi sweets. Ajisai-yashiki is a lesser-known sightseeing destination, making it a great spot for those wanting to go off the beaten path. 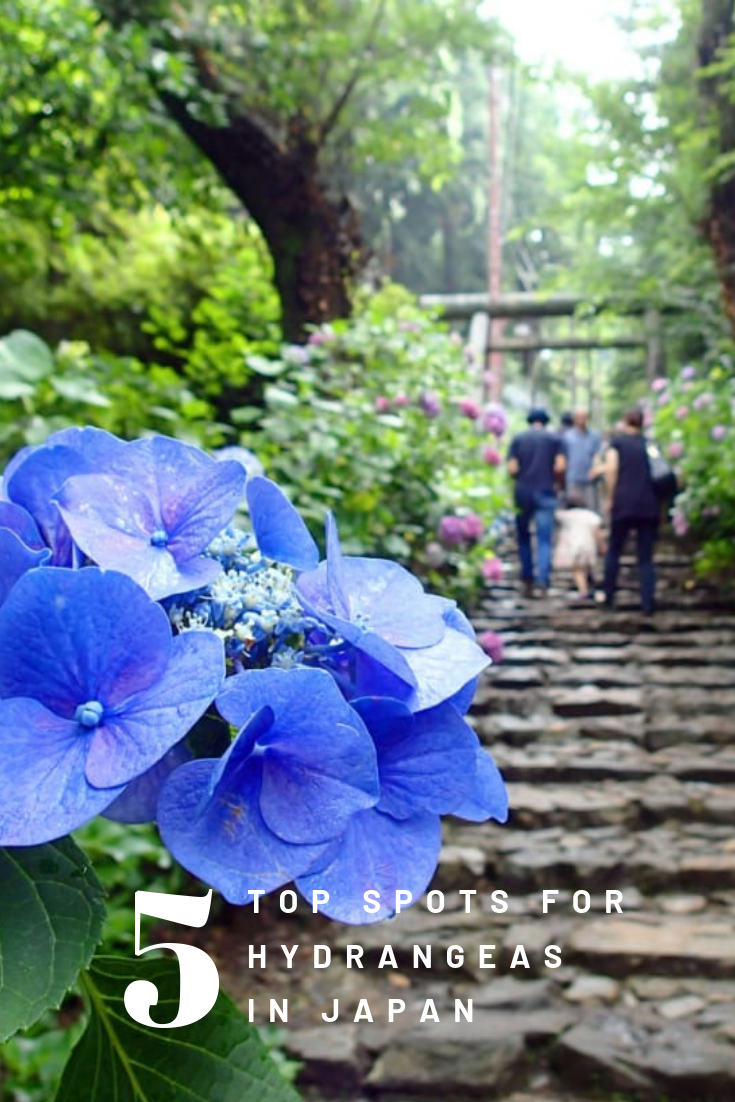