30 of Japan’s Hottest Music Festivals for Summer and Beyond

Nothing says summer like music festivals. We have the lowdown on the biggest and best festivals across the country in 2019.

For those looking for a proper outdoorsy event, this may be your best bet. The festival takes place on an island in the Seto Inland Sea and makes the most of the abundant nature in the area. It’s family-friendly and boasts several activities ranging from slackline walking, SUP boarding, and even kid-friendly bungee jumping(!). Chill DJs and folk singers make up the main music roster, and there are even woodworking workshops for those feeling crafty. Located conveniently in the Yokohama Red Brick Warehouse area, this art, film, music, and surf culture festival is a local favorite. Not only are there live performances by Japanese standards like Kreva, The Bawdies, and Chara, the festival’s international line-up boasts Switchfoot, Fish Bone and more. There will be plenty of art stalls and shows, as well as movie showings. Or, you can just head to the chillout area and do some yoga — the choice is yours. For those who don’t want to leave the comfort of the city, Metrock is the best way to make the most of festival fever without having to travel for miles and miles. The event features some of Japan’s best acts, including UVERworld, Super Beaver, The Telephones, and The Oral Cigarettes. Natsu Biraki Music Festival started in 2007 and has grown to a festival of epic proportions, boasting three venues across the country. Their concept is simple: create a festival that’s easy to get to for a day trip from the city, and make it kid-friendly. Not only is there a family area where families have all the amenities needed (nursing and diaper changing rooms for example), kids under the age of 12 get in free! Artists performing at all three venues include Rhymester, Scoobie Do, and Rickie-G.

Where: Osaka, Fukuoka, and Tachikawa Dead Pop Festival is the brainchild of Shonan punk band SiM (Silence iz Mine), who started the project as an indoor stage show featuring bands from a variety of heavy genres. Since 2015, the festival has been upgraded to a proper outdoor festival affair, now spanning two days every summer in the outskirts of Kawasaki. Bands appearing this year include Brahman, Coldrain, and My Hair is Bad, with SiM naturally headlining each night.

Although it’s nowhere near the ocean, it’s for a good cause. Ocean Peoples gathers together those who want to save our beaches and our oceans for a celebration of these beautiful natural resources without trashing them in the process. Entrance is free, making it accessible for everyone. There will be over 100 stalls featuring local artists and entrepreneurs, as well as food from all over the world. Ocean activities like surfing and diving (yes, you read that right) will also be available. On stage, performances from domestic and international artists will send beach vibes your way. Boasting possibly the best location out of all the events listed, the Corona Sunsets Festival has all the modern festival must-haves: beaches, beer, and great music. There’s no need to imagine the beauty of the ocean and the sand-strewn beaches here!

Entry is open to those 20 and over only. Bring a valid photo ID when you attend. Kesen Rock Festival was canceled in 2011 because of the devastation caused to the area by the Tohoku earthquake and tsunami. The festival came back with a vengeance the following year, in part because local entrepreneurs and musicians wanted the world to see a different side of the region, as well as give the local economy a boost to help it recover. Seven years in, the event boasts a line-up of some of Japan’s best rock acts, including Brahman, Hawaiian6, 10-Feet, Locofrank, and more.

This music and amusement festival in the heart of Hokkaido is in its 10th year, featuring some of Japan’s best rock bands. Non-musical attractions include the Alternative Garden, a collaboration project with sports, art, and performance elements that are fun for the whole family. Now in its 9th year, Muro Festival is a Tokyo-based music event headed by Shibuya live house O-Crest. This year’s show will move it from last year’s Odaiba beachside to Makuhari. Over 50 artists will appear on stage over the two days, including sAbstract Mash, Ircle, Lamp in Terren, and more. 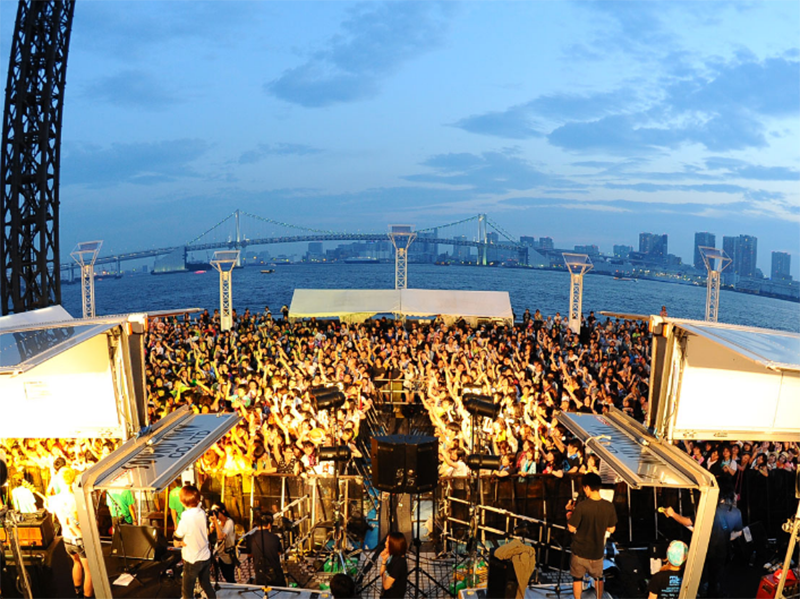 Japan’s biggest festival of the year kicks off as it always does, deep in the forests of Niigata. Over 200 Japanese and international artists make this music haven their home over three days every July. This year’s highlights include The Cure, The Chemical Brothers, Thom Yorke, Sia, and Death Cab for Cutie.

Head north to the home of one of Japan’s most feared demon-like deities, the Namahage. Inspired by these fierce creatures, and perhaps to appease them, the Oga Namahage Rock Festival features some of the heaviest bands Japan has to offer. Ska punk rockers SiM will take the stage here, as well as Totalfat, and Orange Range. It’s not all hard rock and ogres though,  Akita’s famous babahera (two-flavored ice cream served by old ladies) will also be on site to keep festgoers cool.

For the biggest J-pop and J-rock festival this summer, look no further than Rock in Japan Fes, which spans across five days over two weeks. Artists for this year’s lineup are yet to be updated, but it’s guaranteed to be good.

Located in Hokkaido, Rising Sun Rock Festival offers festgoers a reprieve from the oppressive heat that hits the rest of the country during the height of summer. The event prides itself on having only Japanese bands and artists in its line-up, which may or may not be a dig at larger festivals that mainly host international performers. This year’s event features Soil & “Pimp” Sessions, My Hair is Bad, Shishamo, and more. While Eat the Rock sounds like it was made to match Dwayne “The Rock” Johnson’s catchphrase “Can you smell what The Rock is cooking?”, its true nature is quite different. This rock music festival is one-of-a-kind as there is no entry free whatsoever. It’s completely free! Not only that, but the event offers ¥1,500 return shuttle bus tickets to get visitors to and from the venue with ease. While some might consider this a desperate attempt to get visitors to come out so far, looking at the line-up at past incarnations, there’s no need as some of Japan’s best ska acts will be there. Celebrating its 20th anniversary, this citybound three-day musical menagerie that takes place in two cities had a prelude that’s almost as big as the main event — so big that it’s now encompassed in the full festival sphere. Both Osaka and Chiba will see Rancid, Bring Me the Horizon, and Red Hot Chili Peppers on stage.

Already in its 20th year, Monster Bash has in past years offered an impressive line-up of Japanese rock and pop staples, such as Dragon Ash, Buzz the Bears, UVERworld, and The Bonez. This year’s lineup is still in the works, but it’s the must-see Shikoku music festival and a great alternative for those who want to skip the city — or have no interest in Summer Sonic.

Music Circus prides itself on being based in Osaka. While everyone else looks to Tokyo, MC is a pioneer in creating a festival that distances itself from the capital. Music Circus also wants to create more than just a festival; they want to create an experience. Festgoers can enjoy dancing, jetpack flying, Instagram-snapping, and whatever else they want at this two-day beachside dance revolution. The first artist to be announced for this year’s event is Yellow Claw.

Sky Jamboree came about after a chance meeting between producer Katsuro Arimoto and Kemuri frontman and vocalist Fumio Ito. Their belief is that music brings everyone together — not a revolutionary concept per se, but they built on it: when everyone enjoys music together in one place, they create peace in the world. That’s where the festival’s annual theme,  “one pray in Nagasaki” comes in. By rocking out alongside friends and enemies, it’s a modern (and very rock’n’roll) way of creating world peace, even if it’s just one corner of Japan for one day of the year.

Celebrating its 21st anniversary, this Osaka-based fes doesn’t have an available lineup yet, but it’s sure to be jampacked with Japanese rock legends!

Starting out in Hibiya Park in 1996, Space Shower TV’s summer festival moved to Yamanakako in 2007, and the move was nothing short of a total upgrade. This pop-rock mega fes not has not only featured some of Japan’s finest bands in previous years — Maximum the Hormone,  One Ok Rock, Man With a Mission, and Sakanaction to name just a few — it also offers an unrivaled view of Mount Fuji while you rock out.

Part of the wave of alternative and family-friendly festivals, New Acoustic Camp is in its 10th year of creating the ultimate outdoor experience. Enjoy the unadulterated sound of acoustic music while relaxing in the shade by day, and chat over open fires and under starry skies at night. There is also an option for a hotel stay with an onsen nearby for those who don’t want to rough it.

Shima Fes has the ambitious goal of being an oceanside music event that will last 100 years. The fes started in 2011, so we’ll have to wait another 90 odd years to see if this is an impossible dream or an impressive feat. Regardless, its location is enviable — the fes takes place on Shodo island in the middle of the Setouchi Inland Sea and is accessible by boat from 7 different ports. Performers include a host of pop and folk-rock artists and a special pre-festival night will be held on the Friday. And, of course, udon will be plentiful. This creative enterprise has made it its mission since 2014 to provide a festival that equally values art, fashion, design, and music. Artsy folks are invited to design the official event supporter T-shirt (deadline June 3). In line with the festival’s creative and open ideas, the whole two-day event is free.

The artist line-up isn’t available at the time of posting.

In an effort to revive the area, Iwamuro in Niigata decided to create its own rock festival, cleverly nicknamed Imwamurock. While relatively minor, the event hosts plenty of local talent and works hard to promote young and upcoming artists in particular. If indie music is your jam, then this music fes is a must.

Details for this year’s festival to be updated this summer. Yes, that’s festival with an “h.” The “he” represents the word for volcanic ash in Kagoshima’s local dialect, which is fitting, since much of the city is covered in it thanks to the nearby Sakurajima. In fact, the fes will take place on the Sakurajima peninsula, at the foot of the active volcano. Fuji Rock Festival’s little sister is way more chill, tends to have better weather, and has a front-row view of the “right side” of the beautiful Mount Fuji. This year’s event details should be available in July.

If festivals aren’t your thing and you’d rather hang out in the city, then check out our Tokyo beer garden roundup.