Yokohama is Japan’s second largest city with a population of nearly 4 million people occupying an area larger than some countries. Despite that, for a while now some of those people have been raising the issue of a lack of family spaces in the city for both adults and young children. The recently-opened Asobuild is an attempt to address that problem.

Located right next to Yokohama Station, Asobuild used to be the annex of the Yokohama Central Post Office, which has now been rebuilt into the premier family entertainment destination in the city. With a total of six floors, Asobuild aims to combine creativity, technology, food, and entertainment in one convenient location where you can not only have fun but also learn and think about the future. From the basement-level Pitch Club styled as a “playground for adults” with pool tables and a cocktail bar, to the fourth-level PuChu kids’ park or the Monotory handicraft/workshop floor, Asobuild is trying to update the idea of entertainment for the modern age.

But, of course, all that everyone can talk about is the Poop Museum, located on the second floor (Ale-Box) of the building. It might not be what you’re thinking, though. When you first enter the Unko Museum Yokohama as part of a six-to-eight-person group, you’re greeted by black walls, bright studio lights, a screen showing various cartoon-poop animations and poop-related puns, and staff wearing poop hats. You cannot proceed farther until the entire group shouts “unko!” (“poop”). After that you will be shown to the group toilets.

Don’t worry, they aren’t real toilets, just a row of pastel-colored toilet bowls where you and the rest of the group are expected to sit. Then, you must do a bunch of grunting noises, though strained facial expressions are apparently a personal choice. Once you’re done and look inside your toilet, you’ll notice that it now has a small, plastic poop inside it. Take it. It’s your personal “My Unko” poop that will accompany you throughout the rest of the tour. 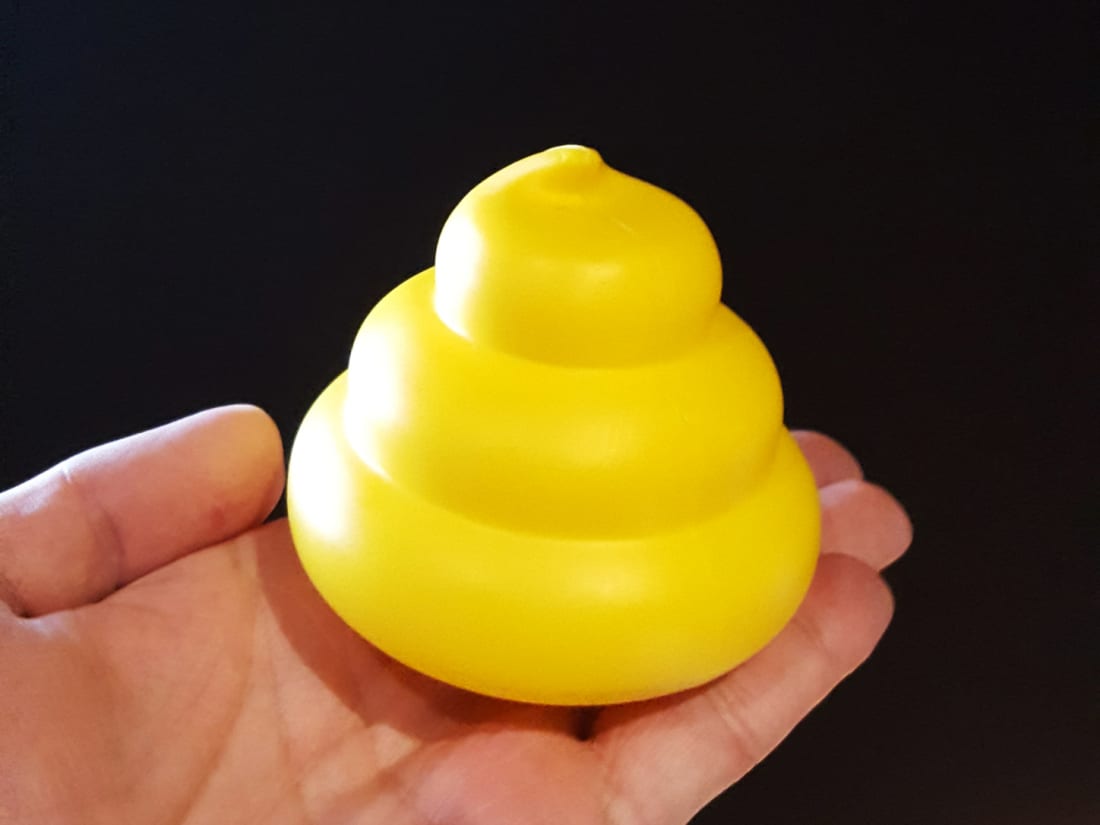 The second part of the museum is more open with poop-shaped chairs that you can sit in by poop-shaped tables. There’s also a large poop volcano that periodically erupts little plastic poops. If you’re already starting to feel like the word “poop” is losing all meaning due to how often it’s been used up until now, things are only going to get worse.

The museum also features poop games like the one where a cartoon poop flies through stock photos and you press a button to stop it while it’s still in frame in order to photo (poop) bomb it. And down in the Interactive… sorry, UNteractive (because “unko” starts with an “un”) area, you can play the Unko Shout game where you shout the word “unko” into a mic, which causes a computer-generated cartoon poop to appear on the screen in front of you. The louder you scream, the bigger the poop will be. For more physical-challenging activities, you can always take part in an interactive game where you stomp little holographic poops. Before you leave, though, make sure to take advantage of the many photo areas where you can photograph yourself or your My Unko in front of couple toilets or suspended plastic poops or poop-shaped cake arrangements.

It might seem strange to say it now after using the word “poop” close to 20 times, but despite the overall theme of the museum, the first word that springs to mind when describing it is… elegant. It’s brightly-lit, well-spaced out, and it doesn’t exist to gross anyone out. It actually resembles an interactive art gallery, even omitting its exhibition of poop-themed drawings.

It’s art in the sense that everything there makes you think about modern culture and the nature of humor and how people from all over the world find poop funny. The entire endeavor may be a joke, but it’s actually a pretty smart joke told deliberately to make you take notice and think about all the things that connect us in a fun, offbeat way. As such, it’s a perfect representation of Asobuild’s mission statement.

Find details on our events listing.