If you’re looking for a slice of Japan that radiates the charm of yesteryear, look no further than Kurashiki.

Only a 15-minute train ride away from nearby capital Okayama, Kurashiki was once the vital distribution center for rice and cotton production of the Tokugawa Shogunate. The gorgeous black-and-white tiled warehouses along the Kurashiki River (Kurashiki can be loosely translated as “town of storehouses”) were once used to store its staple crops.

During the Edo period, rice equaled money, and numerous merchants, powerful families and local rulers became fantastically wealthy from rice. In turn, they invested heavily in the local arts and crafts, refining and preserving them for future generations. Kurashiki’s biggest draw is the beautifully preserved Kurashiki Bikan, or historic canal district lined with Edo- and Meiji-era warehouses, shops and private homes. The district is an easy 10-minute walk from Kurashiki Station. Small flat-bottomed punts are skillfully navigated through the canals on a 20-minute sightseeing tour, or you can choose to travel the narrow alleys by rickshaw. Be sure to stay for sunset as the town is at its most magical then.

Along the willow-lined canals, you’ll find numerous coffee shops, galleries, and several outstanding museums, including the imposing Ohara Museum of Western Art, which is the oldest private Western art museum in Japan. Founded in 1930 by Kurashiki magnate Ohara Magosaburo, the museum includes masterpieces by El Greco, Gauguin, Monet, Matisse and other artists, as well as Chinese and Egyptian art. Be sure not to miss the neighboring Japanese garden and teahouse Shinkei-en. Picturesque Cafe El Greco, founded in 1959, offers retro Japanese coffeeshop charm.

Another must-visit is the Ohashi House, a Nationally Designated Important Cultural Property built by wealthy rice merchants in 1796, along with other restored merchant homes and shops.

Fired Up for the Arts

Kurashiki is also a great place to experience bizenyaki ceramics, which are characterized by their rough surface, reddish-brown hue, lack of glaze and scorch marks resulting from firing in a pine-burning kiln. With a history dating back over a millennium, bizenware is one of the oldest pottery techniques in Japan and its unique properties and neutral color scheme make it a perfect fit for any décor. A good place to sample and purchase Kurashiki crafts is Kurashiki Craft Work Village: this 170-year-old multi-purpose facility includes local glassware, denim, and hand towels.

Nearby Kojima Jeans Street is the birthplace of jeans in Japan and its legacy for high-quality denim lives on. Aizome, or indigo dyeing, has been practiced in Japan since ancient times and was favored by samurai for its antibacterial and insect-repelling properties.

Kurashiki had been cultivating cotton and producing fabric since the 1500s, but it wasn’t until the early 1960s that denim caught on in Kojima with the opening of Betty Smith Jeans. Jean-themed artwork adorns the streets and shops, and at the Betty Smith jeans-making experience, you can customize a pair of jeans (including color, cut, fit, buttons, rivets and patches) while you wait. You’ll also find numerous food products cashing in on the denim craze, including denim-hued burgers, nikuman, soft serve and even beer.

In July 2018, Western Japan was devastated by mudslides and record flooding. The Mabicho district in northern Kurashiki was one of the hardest-hit areas, with 30 percent (about 1,200 hectares and 4,600 houses) submerged by the Oda and Suemasa rivers. The evacuation order came just minutes before the floodwaters arrived, with many elderly casualties.

The Bikan historical quarter was not directly affected, but hotels and businesses relying on tourists felt the pain of having 50 percent of their bookings canceled in the immediate wake of the flooding. In response, local hotels and businesses sent out messages on social media that the historic district was open for business and operating as normal to reassure and encourage others to visit. Some area hotels hit by cancellations opened their doors to flood evacuees, providing a month of free room and board paid for by the prefectural government.

Today, cleanup in Mabicho is still ongoing (many residents are still living in temporary housing or continuing to clean and renovate their houses), but historic Kurashiki is eagerly waiting to welcome visitors with its old-time charms. Be sure not to miss this enchanting city. 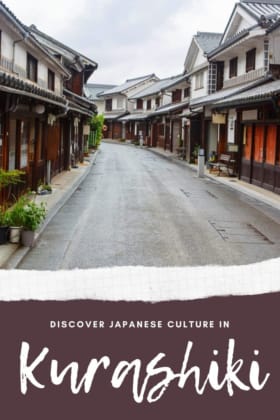