As a country rife with history, tradition and mythology, it is only fitting that Japan boasts some fantastical and frightening tales of spectral spooks. Here are six of our favorite Japanese ghost stories…

The Ties That Bind

In the early 1700s it was all the rage for Tokyo’s lovelorn couples to commit double suicide by tying their wrists together with trendy tea towels before throwing themselves into deathly waters. Over the course of 18 months a total of four couples committed this “tea towel suicide.”

A century later a young heir to a Nihonbashi cotton wholesaler had a steamy affair with a handmaiden that led to her pregnancy. The man was betrothed to another young lady of more respectable roots, and when his torrid affair came to light, the handmaiden was banished to a faraway farm, committing suicide the night she arrived.

When his new young wife became pregnant with a child of her own, all seemed right in the cotton wholesaler’s world. However, one morning, the young couple was discovered dead in their bed, covered in blood, their wrists bound tight by a decorative tea towel, victims of a ghostly handmaiden scorned.

The Temple of Doom

After the construction of the Yokohama railway in 1908, foot traffic slowed to a crawl along the Silk Road connecting Yokohama and Hachioji. Located at the center of Hachioji’s Otsukayama Park is Doryo-do temple, sometimes translated as “the end of the road temple.” As visitors declined, the once robust temple became a dilapidated husk of its former self. In 1963 a thief robbed the temple of its meager funds, and killed the elderly woman maintaining the grounds when she resisted the cowardly burglar.

The temple witnessed a second tragedy 10 years later. In 1973, a married literature professor had an affair with one of his students. As the relationship soured, and as university officials became suspicious of the salacious relationship, the professor broke things off. However, the student became despondent, attempted suicide and threatened to reveal the affair to the professor’s wife.

The professor invited his student to his country home in Hachioji with the ruse of patching things up. Instead he strangled the girl and buried her body in a shallow grave near the remains of Doryo-do. Her corpse went undiscovered for seven months, during which time the professor committed a murder-suicide act with his family of four.

Doryo-do temple has become a favorite haunt for ghost hunters, and unwitting passerby supposedly hear the heavy sobs of an elderly woman, or the cry of a young woman’s voice calling out, “Here! I’m here!”

She Wouldn’t Even Harm a Fly…

Following the death of a successful Edo-era wax wholesaler, his dastardly son and daughter-in-law confined his well-respected widow to a small cell of their own making. While their mother whiled away in seclusion, the debauched couple and their three sons ran up debts and abused the help. When one of the maids, who suffered the brunt of the abuse, attempted suicide, the vengeful apparition of the confined mother began appearing before family members, materializing in the mirror to rip at her daughter-in-law’s hair.

One night, with all five family members soused from spirits, rat poison was surreptitiously administered to their food. After the realization was made, all five members battled with each other, fighting to be first to leave for the doctor’s office. Servants watched in horror as the mistress of the house grappled with an unseen assailant, shrieking curses directed at her imprisoned mother-in-law.

By the end of the melee, the entire family perished. When investigators searched the house, and broke down the door to the mother’s cell, they discovered a tiny room resembling a rat’s nest, and the withered, shrunken corpse of the long-deceased mistress of the house. 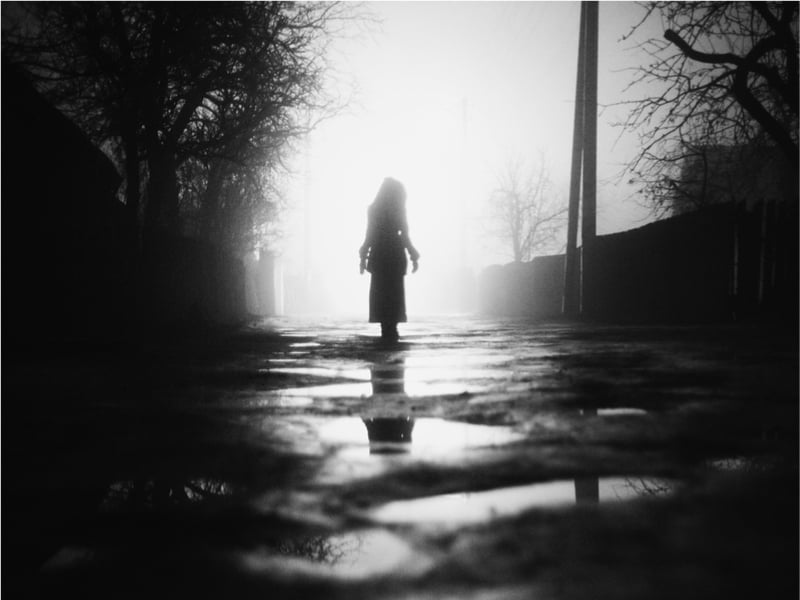 The Shadow of Yotsuya

One of Tokyo’s most famous ghosts is that of a fated wife known by the name Oiwa. The frightful specter of Oiwa, disfigured, with bald patches marring her flowing black hair, is said to be seen roaming the Yotsuya neighborhood.

Legend has it that Oiwa was the wife of a member of the Tamiya family. In the early 17th century, Oiwa’s husband fed her a poisoned lemon. His intention was to kill his wife and marry a younger woman from a rich family. The poison wasn’t potent enough, and Oiwa’s death lingered. Her face became disfigured, and her hair fell out in clumps. Her last breath was used to curse her husband’s name.

Oiwa’s ghost is said to haunt the remains of the Tamiya family shrine in Yotsuya where Oiwa once worshipped. The ghost story became so prevalent that a kabuki play was written about the sordid affair, and the Tokyo Metropolitan Board of Education posted a sign at the shrine’s remains debunking the terrifying myth. You can visit the shrine and learn more about this ghostly tale on a Haunted Tokyo Tour.

The coastal city of Ishinomaki in Miyagi Prefecture was devastated by the 2011 Tohoku earthquake and tsunami. More than 3,000 people perished in the ocean’s waters as waves 10m high enveloped the town. Perhaps most notoriously, Ishinomaki Okawa Elementary School lost 70 students. Teachers squabbled about the correct course of action, delaying evacuation. They finally decided to reach higher ground by crossing a nearby river bridge, from which everyone was washed away.

A young woman entered a cab and promptly asked him, ‘Have I died?’

In the aftermath of the devastation a Japanese sociology major corresponded with Ishinomaki taxi drivers, asking if they experienced anything unusual after the disaster. More than a handful of the taxi drivers reported giving lifts to passengers who request rides to the mountains, or areas of safety, and disappear before reaching their destination. One driver said a young woman entered a cab and promptly asked him, “Have I died?” before vanishing. The ghostly rides were all recorded in the taxis’ meters, and ultimately the drivers had to pay the fares for their phantom customers.

The Voice of the Chinese Soldier

Mount Hakone is located in Toyama Park, a sprawling green space in northern Shinjuku Ward. At 44-meters-tall the hill is the highest natural point within Tokyo’s Yamanote loop, and during cherry blossom season it is a popular hangout for nearby Waseda University students.

More mass graves are waiting to be discovered.

Japan’s Imperial army operated a medical school nearby with ties to the infamous Unit 731, a covert World War II unit that conducted lethal experiments on prisoners at its facility near Harbin, China. Under the auspices of “epidemic prevention,” the Chinese prisoners of war were exposed to typhus, cholera and bubonic plague. They were amputated and disemboweled while still alive – without anesthetic. It is rumored that bodies, and body parts, were shipped to the Shinjuku facility for further research.

At the end of World War II, all evidence was ordered to be destroyed – or buried. In 1989 a mass grave was unearthed in the Toyama area. Based on reports by a wartime nurse who was ordered to bury corpses, bones and body parts, more mass graves are waiting to be discovered.

Toyama Park, the former grounds of the Toyama Military Academy, opened in 1954. Mount Hakone existed long before, going back to the days when the park was the garden owned by a samurai of the Tokugawa clan. Today, when visitors climb the wooden stairs to the peak of Mount Hakone at night, they report hearing the disembodied voice of a weeping man. Others see floating balls of fire known in Japanese folklore as hitodama, which are said to be the souls of the dead separating from their bodies.