Most creatives who have lived in Tokyo for some length of time find a way of offering their own version of a love letter to the city. For award-winning photographer, writer, stylist, dining consultant and author Andrea Fazzari, that love letter materialized in the form of her recently published book, Tokyo New Wave. 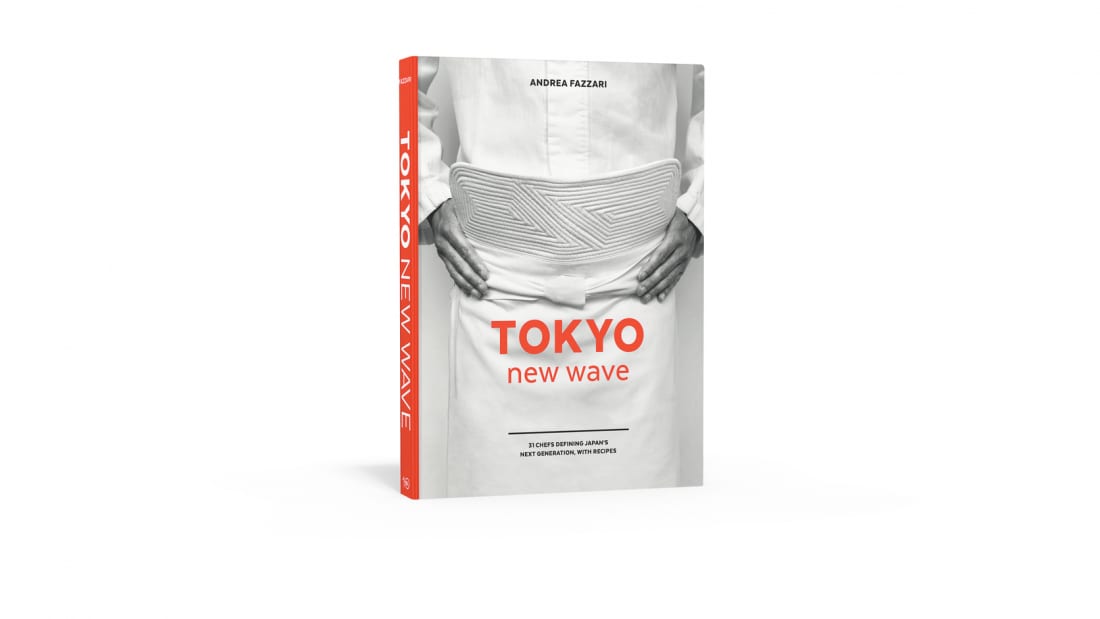 After moving to Tokyo a few years ago, the Manhattan native – who has also lived in Paris, Florence and Hong Kong – conceptualized, photographed, wrote and co-designed the book, making this already impressive coffee-table tome all the more remarkable. Fazzari’s inimitable character and talent is as much a part of the book’s essence as are the 31 chefs she’s chosen to feature.

This comes across not only in the fact that she managed to gain such intimate access to the chefs’ private lives – no easy feat in Japan – but also in the lyrical way she writes about them (and the passion with which she talks about them during our interview). Once you finish reading the book, you’ll feel as though you truly know this particular group of Tokyo’s new wave chefs. You’ll also feel as though you know Fazzari.

Why did you create this book and what were the important elements for you?

There really hasn’t been a book like this about Tokyo or Japan as far as food goes. It’s definitely an anthropological ode, in my view. It’s not a traditional cookbook at all. It’s about a city and a culture and it just happens to have some recipes in it. Also, I was keen on including a lot of different types of chefs and cuisine to reflect the city itself; I thought that was important.

That’s exactly what I love about it. It’s more about the people than just listing recipes. I was amazed at how you managed to connect so emotionally with each person.

Oh, I’m glad that came through. Some of questions I asked the chefs were quite personal. In fact, they made some chefs feel uncomfortable, but I think that was a good thing. A few would say, “Oh a Japanese journalist wouldn’t ask that” or simply, “I don’t know.” But I wouldn’t back down. I would say, “Well, you can think about it and come back to me.”

One of the very revealing questions you asked was “To you what does it mean to be Japanese?”

That was my favorite question. It takes a lot of self-awareness and introspection to answer that, and also awareness about where you come from. For the chefs who have had some experience living overseas, it was easier to answer, because they have more context.

I like the Japanese word ikiru, which means “to live.” It’s the name of a favorite film of mine, an Akira Kurosawa movie. I also love the word anima. It’s Latin but also Italian, and it means “soul.” I think it’s very melodic and it’s something I refer to in the book a lot – when something touches me, it touches my soul.

The way you’ve photographed and written the book really expresses this feeling. You’ve captured each of the chefs’ distinct character and spirit.

I think that’s because I spent a good amount of time with most of the chefs, and each was chosen for a different reason. And even, surprisingly to some people, a few of the chefs are in there more for their personal stories than their food. Because I think they have something to say about Japan and they were very endearing to me in some way where I learnt something or was amazed by their substance of spirit. So this is not a “best of” or a ranking of chefs. Some are considered “best of” but others are still evolving and on their way to something – but that’s why by using the concept of “new wave” I felt I could include them.

What does new wave mean to you?

New wave refers to how what’s happening now in Tokyo [with regards to cuisine] is very different than even 10 years ago. But the significance of the title is that it’s very different from a generation ago. So new wave is the new generation. With that said, there are a lot of interesting things happening in Japan’s cuisine world – there is social media, there are tons of collaboration dinners, and these days more chefs are traveling abroad and then coming back and using what they learned in the food they make here in Tokyo. They’re also more open to foreigners. And all of this is in turn changing the city.

Below, we feature five of the Tokyo New Wave chefs with excerpts, photos and a recipe from the book… “Takeuchi’s sleepy eyes are expressive; her face is makeup free. She sees me at the door and nods slightly, indicating that I can enter. Timid but welcoming with an infectious smile, Takeuchi is not only one of Japan’s few female chefs but also one of the only female sushi chefs, historically an exclusively male profession. As she greets me, I notice her raw, rough hands reflecting her years of hard work butchering fish.

There are deeply entrenched beliefs and traditions in Japanese culture as to why women have never made good sushi chefs. It was said that the size and temperature of their hands negatively affects the fish and that their makeup (the assumption was that all women wear makeup) interferes with their sense of smell. Stereotypes and sexist views are slowly changing. Takeuchi’s male peers recognize her determination and disregard for sexist norms, and in large part consider her one of their own, a skilled Edo-style sushi chef.” “Tsuji’s personal story is a poignant one that conveys his self-reliance and strength of conviction. He fell in love with Italy when he was in high school, just by looking at magazines and movies. Getting there became his primary goal, taking small jobs in Tokyo in order to save enough money to buy a ticket. He had no idea about food or becoming a chef; the only desire he had was to be in Italy. He had never left Japan before.

He succeeded and arrived in Siena, at age twenty, quickly enamored by his surroundings, the art, architecture, and warmth of the people. However, three or four months after his arrival, he ran out of money. Without work, he was homeless, sleeping outside on a bench. Despite these profound challenges, Tsuji was resolute to stay in Italy. This tenacity kept him on his path. Doors opened for him. An acquaintance discovered he was living outdoors and offered him shared housing, and then soon after, a job in a kitchen.

Tsuji had never trained in the food world in Tokyo or anywhere before; his eyes were opened in Italy. He experienced a personal transformation and still savors this evolution, and the impact his time abroad had on his life.” “Thirty-year-old Kan Morieda wears round black glasses reminiscent of I.M. Pei; they give his boyish face a vaguely retro look and a slight quirkiness that suits his jovial personality. He is tall with a refreshingly goofy and good-natured energy. His thick hair remains standing after he runs his fingers through it. He giggles often and is easy to talk to. His restaurant, Salmon & Trout, opened with friend and business partner Shion Kakizaki, is like Morieda himself – warm, welcoming, and rule free. This is a restaurant to hang out in, not just to eat in; hours pass in its cozy glow before you realize it. There are no chef’s whites to be found here, no serious self-regard or pursuit of awards and stars.

Morieda’s informal style is creeping into the food scene in Tokyo. Young chefs like him are liberated by their greater awareness of the culinary world outside Japan and the possibilities this knowledge offers. Conformity is a concept that makes Morieda bristle.” “Koizumi’s restaurant, Kohaku, is a showcase for the artistry and spirit of kaiseki cuisine (haute cuisine) – a confluence of the seasons, the farmers and the artisans who make the ingredients, and the beliefs in the health benefits of food – steeped in abundant, profound symbolism. Every choice at this three-Michelin-starred restaurant is made with profound intention and consideration. With great eagerness, Koizumi is content to expound upon the philosophy of Kohaku, and themes of connectedness and nature.

Koizumi’s shisho (master) is Hideki Ishikawa, the renowned, revered, and humble kaiseki chef, who Koizumi trained with for eight years. What differentiates Koizumi from Ishikawa is Koizumi’s use of fine ingredients from around the world (his mentor uses exclusively Japanese ingredients), the way he creates his omakase (chef’s choice) menu with these ingredients, and a more modern dining space. The beauty of Kohaku is that it is both traditional and contemporary – I can see the past and the future of Japan.”

“I cannot help but focus on Yuji Tani’s tattooed arms when I meet him at his restaurant, House. In Japan, tattoos generally bear a strong stigma and association with organized crime and criminality. They are not commonly seen, not even in kitchens – the opposite of much of the world, where chefs display their tattoos boldly and with pride … But none of this fazes Tani; he shrugs it all off. He is comfortable in his own skin and thinks tattoos are artful and cool, an assertion that undoubtedly reflects his strong, independent streak.

Tani’s restaurant, House, feels like a cross between a Provencal country cottage and an urban loft. Bright, airy, and natural, it is bathed in glorious afternoon light, thanks to floor-to-ceiling windows. A wooden deck and garden feature large olive trees and potted plants … Here, the feeling is one of casual, breathy ease, of relaxation and individuality.” Serves 2, note: preparation needs to start one day in advance We’ve got one copy of Tokyo New Wave to give away. To enter, email your full name, phone number and postal address, along with why you’d like to win the book, to [email protected] by August 31, 2018.

Tokyo New Wave is available on Amazon for about ¥3,600. For more info, go to andreafazzari.com and follow Fazzari on Instagram: @tokyo_new_wave