Chances are, Tottori is not a name that has made its way onto your list of must-visit places in Japan. Hugging the Sea of Japan along a largely isolated stretch of coastline, Tottori – the least populated among all of the archipelago’s prefectures – tends to fly under the radar of Japanese residents and visitors alike when it comes to scoping out potential travel destinations.

As I learned during a recent visit to Tottori city, however, the region is dotted with numerous alluring spots that easily belong on any traveler’s itinerary. Here are a few suggestions to get you started. (To book a tour featuring all of these experiences, visit ANA’s new Odyssey Japan website.) Gaze at the Ocean from Tottori Sand Dunes

Want to take a long walk along the seacoast amidst scenic sandy ridges? Yes, you read that correctly – Tottori is home to a 16km-long stretch of sand dunes that might confuse one into thinking that they had somehow been teleported into the Sahara Desert instead of standing on a beach in rural Japan.

With the Sea of Japan creating ever-changing local weather conditions, no day at the dunes is ever the same. A typhoon had blown through the area the day before our visit, carrying rain-whipped wind that had formed gorgeously sculpted waves with a hardened crust that a local tour guide informed us was quite rare to see.

Located at the entrance to the Sanin Kaigan National Park (www.sanin-geoparkkan.jp/eng), the sand dunes also offer opportunities for activities such as paragliding and sandboarding (just like snowboarding, only on sand), or simply gazing at the stunning view of the dunes framed by crashing ocean waves. Be Wowed by Sand Art at The Sand Museum

Opened alongside the sand dunes in 2006, this museum – the only one of its kind across the globe – invites teams of leading international sand artists to Tottori every year to craft sculptures out of the local dunes featuring a particular country or region. The museum’s 2017 installation – the tenth since its founding – features the United States as a nod to the country where sand sculptures originated as a modern artistic practice (think 1970s California beaches). Personally I’m not a huge fan of museums, and I normally would have been restless to get back outside and continue enjoying the dunes. But I must say, I was blown away by this museum thanks to the grandeur of its massive sculptures. With towering images featuring all manner of Americana, which were set to the backdrop of dramatic classical music, I could have easily spent hours here. Ever seen a hamburger with fries that’s three times taller than you are? Note to self: the 2018 exhibition will feature Scandinavia. Plan next visit now! Feast on Crab at Seafood Shop and Restaurant Hamashita

The Sea of Japan teems with all nature of fishy creatures, and seafood lovers will find that Tottori is a prime foodie destination with tempting seasonal offerings available all year. Mr. Hamashita, the owner of this establishment which is found just in front of the seaport, informed us that we were unfortunately a couple of weeks too early to enjoy locally caught matsubagani (spiny-legged adult male snow crabs, which have earned a nationwide cult following due to their sweet, rich flesh) because the local crab season officially opens on November 6.

After this date, he explained, local fisherfolk haul up their catch to be immediately boiled onsite in giant vats – thereby retaining the crab meat’s freshness. Although disappointed at our timing, we quickly turned our attention toward browsing the other plentiful options here for fresh fish, as well as stocking up on dried marine products to take back home, and sampling some delightfully hot and crispy kara-age (deep-fried nuggets) of tanakagenge, a local white-meat fish, from the onsite restaurant as a mid-morning snack. Feel Calm in the Garden of Kannon-in Temple

Dating back to the Edo era, and lying along the pilgrimage route for temples worshipping the Bodhisattva Kannon, this temple is truly an oasis of calm. Built by the Ikeda clan, Kannon-in’s crown jewel is its garden, which earned the official title “Special Place of Scenic Beauty” during the 1930s. The room overlooking the garden is used for studying Buddhist scripture, and with its intricate wooden designs and quiet breeze blowing in from the garden through a large open window, I found myself tempted to spend the rest of the morning sitting down in meditation – or at least in quiet contemplation. With the rest of our itinerary beckoning, however, my travel companions and I settled for enjoying a brief stroll around the perimeter of the garden. This was followed by a bowl of matcha (powdered green tea) that came accompanied by a delightfully soft and tart jellied Nijyusseiki (20th century) Asian pear – another culinary specialty of the Tottori region. Located a stone’s throw from the fish shop we had visited earlier in the morning, this seafood market – the largest in the city – also offers patrons an opportunity to learn how to carve their own sashimi for lunch. Although the market was not offering the classes on the day of our visit, one of its seasoned fish masters was kind enough to offer us a demonstration of what the course entails. We watched with fascination as he proceeded to swiftly and capably wash, de-scale, and then gut his fish – a hiramasa (yellowtail amberjack) – before instructing us on the proper angle of the knife when slicing through particular sections of flesh and bone. Before long, he had transformed the once-slippery creature into a gorgeous display that included a mound of soft sashimi slivers, along with another that he had sculpted to resemble the petals of a rose. Pure fish magic. Our appetites officially piqued, we happily clambered up the charming wooden staircase to the second floor of this Showa-era shabu shabu (hot pot) restaurant. The room was soon filled with the sounds of delicate swishing – along with hungry slurping – as our chopsticks guided slices of soft wagyu beef and piles of local vegetables into copper pots filled with boiling water, which we then dipped into a bowl of delectable gomajoyu (sesame soy sauce) and enjoyed along with some chilled sake.

We learned that original restaurant proprietor Shoya Yoshida, a wartime military doctor and a Tottori native, is credited with having brought shabu shabu – formerly known as susugi nabe (from the sound of “rinsing”) – to Japan from China. He had seen the dish prepared there with lamb, and adapted it to local tastes by instead using beef.
An avid fan of mingei folk crafts, Yoshida also opened a museum on the same premises as the restaurant featuring the works of local folk craft artists. A quick peek in the window of the museum and the adjacent shop revealed numerous exquisite pieces on display. Don’t let the name fool you: this is no sleazy corner booze joint. Au contraire, owner Nobumasa Tanimoto – a kikezakishi (sake specialist) who is originally a sommelier by trade – has stocked his cozy store and event space with racks of both sake and wine. From the moment Tanimoto welcomed us into his shop for a sake tasting, our group was immediately drawn to his charismatic warmth and good energy.

Pouring us several rounds of sake, including the rich and pure-tasting Goriki made from the recently revived local Goriki rice, Tanimoto proudly explained that a movement is underway to return to more natural and organic methods of sake production. And Tottori is uniquely suited for this purpose, he said, due to its history as a thriving center of rice cultivation dating back to the Edo period.

“Tottori is well-suited toward a culture of sake not only because of our pristine nature and four distinct seasons, but also due to the shifting range of temperatures that we experience on any given individual day, since we are situated right between the ocean and the mountains,” he explained. “The unique combination of our high-quality rice, pure water, and dedication of our people make our sake exceedingly delicious.”

Tanimoto added that from a health perspective, it is best to begin with chilled saké before making one’s way toward the warmed version (atsukan)— much like it is healthier to move to room temperature red wines from the traditionally cooler whites. “That way,” he noted, “you can go to sleep with a nice warm tummy.”

Later that evening, having feasted on a scrumptious dinner of local seasonal treats including more plates of sashimi and succulent grilled mosaebi shrimp, accompanied by round after round of local sake, this is exactly what we did.

ANA’s new Odyssey Japan curated tour service offers package deals to Tottori, featuring all of these experiences. Their next tour to Tottori is scheduled for December 9-10, 2017 – to book yours now, visit their tour page at www.ana-exjapan.com/en/feature/odyssey/. 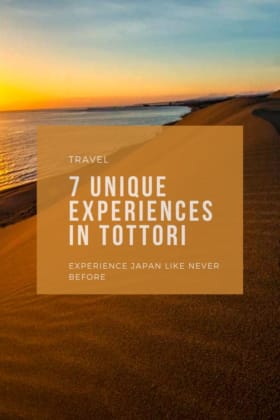