Want to get your PADI certificate and explore some of the most beautiful and mysterious diving sites in Asia? We ask a local instructor to reveal his pick of world-class spots for coral and fish spotting in Okinawa.

After returning from two separate year-long stints working as a dive instructor in the Maldives and northern Australia, Naoaki Ueno opened his dive shop, Dive Center Isles, in Okinawa’s Onna village in early 2015. Despite his fondness for travel, Nao was compelled to return to Okinawa as he felt it was his obligation to share the secrets of his birth country’s thriving underwater existence. Having made over 5,000 dives worldwide, Nao is like a walking, (Japanese and English) talking aquatic encyclopedia.

His presence on the island is significant for foreign tourists who wish to dive as he is one of a handful of instructors who are capable of adequately delivering tours and PADI open-water dive certification courses in English. Given the potential dangers of scuba diving, it’s one activity that calls for more than Eigo chotto (a little English). Here, he reveals his favorite dive sites in Okinawa, along with the types of creatures you’ll be getting up close and personal with.

There are few places in the world where you can dive with whale sharks. Although these ginormous creatures can grow to around 12 meters, they are surprisingly gallant and peaceful around divers. If you’ve never dived before, consider this your golden opportunity. Although you’ll have to stay outside the netted area – unlike the certified divers – you’ll still feel as though you’ve entered into a fantasy world. Before descending into the whale sharks’ realm, you might want to reassure yourself: although their gaping mouths are big enough to swallow a diver whole, they only eat plankton. Watch as their huge spotted bodies glide through the water, with sucker fish hitching a ride as they go.
Look out for: giant trevally, rainbow runner, batfish To the northeast of Minna island, the coral is bountiful and vibrant. Growing in the shallows as well as depths of around eight meters, species such as staghorn, elkhorn and finger coral can be admired by snorkelers and divers. The contrasting fluorescent colors dispersed throughout pastel tones give the impression you’re looking down on the most spectacularly designed botanical garden. However, this is the artful work of nature at its finest and perhaps the reason equally colorful fish choose to make it their home.
Look out for: green moon wrasse, garden eel, ray 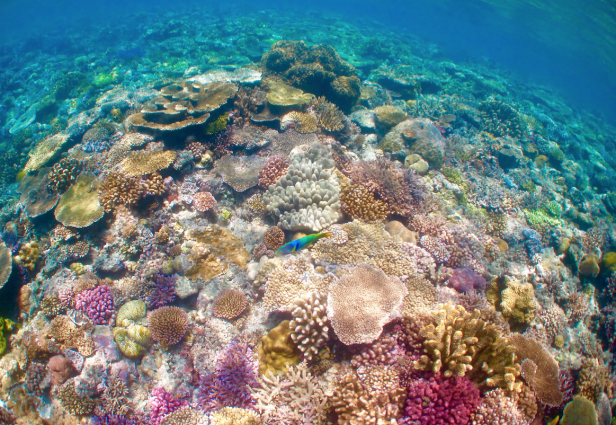 The neon-blue water flooding the entry of this eroded cave is a rare natural phenomenon caused by the sun’s reflection hitting at just the right angle. As a result, the water presents itself in a seemingly unnatural bright blue; attracting the attention of many snorkelers. Whilst the Blue Grotto is not technically a “secret” spot, it can only truly be appreciated by those who scuba dive to explore the caves. Those who opt to snorkel will have to queue on the stairs when entering from the shore and watch out for the flippers of erratic swimmers close by. With fewer people deep inside the cave, there’s more opportunity to swim around and witness small fish darting in and out of alcoves and emerging from mottled rock formations.
Look out for: batfish, parrot fish, cuttlefish This off-shore site makes the list for its unusual combination of features you won’t find elsewhere. There’s a deep, dark hole with two entry points, banded overhead by solid rock. With a depth of approximately 30 meters, the pitch black tunnel is reserved for experienced divers only. For those more interested in finding Nemo, there’s a vertical reef that’s hard to miss (or leave for that matter). Home to an abundance of rare creatures, this is where you’re likely to spot a shy octopus slinking around a hole, or an exotic fish camouflaging itself amongst the patterned coral.
Look out for: sea turtle, octopus, big lobster

This article appears in the August 2016 issue of Tokyo Weekender magazine.