Thinking of visiting the Tohoku region in August? Besides the impressive and well-known Aomori Nebuta Festival, there are plenty of lively matsuri taking place in the area during summer. Read our article, “Why You Should Visit Tohoku,” and plan your trip to tie in with one of the following festivals.

This one also boasts a performance by around 10,000 dancers, but for this festival they’re holding hanagasa (“flower hats”). The three-day event is held from August 5 to 7, and attracts over one million people with its beautiful costumes, impressive floats, and unique choreography. www.hanagasa.jp While Tanabata festivals are usually held in Japan in July, the Sendai version takes place from August 6 to 8. Also known as the Star Festival, this traditional event is a celebration of the legend that tells of two stars, Vega and Altair, who were separated lovers only allowed to meet once a year in the Milky Way. It’s one for the romantics, for sure, but it also impresses with unbelievably big and colorful decorations that take over the streets. www.sendaitanabata.com/en Amusingly, this festival features a giant waraji (straw sandal) that’s 12 m long, weighs two tons, and is carried by 100 people through Fukushima city. The point? To pray to be a “good walker” and increase patriotism. The event has been going since the Edo era, and is held from August 2 to 3. tinyurl.com/TWwaraji Held from August 3 to 6 every year, the Kanto Festival is intended to frighten away “demons” before the autumn harvest. Designated as an Important Intangible Folk Cultural Property in 1980, it’s one of the four biggest summer matsuri in Tohoku, and features hundreds of competitive performers balancing massive lantern polls as they’re cheered on by the crowds. www.kantou.gr.jp/english 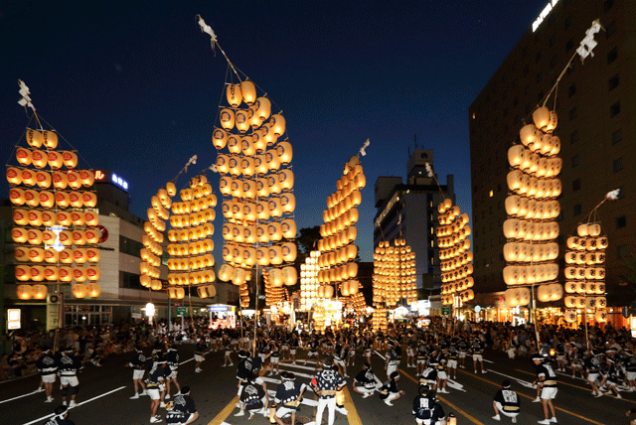 Taiko fans will relish the chance to see over 10,000 drummers and dancers parading the city of Morioka in Iwate Prefecture between August 1 and 4. Listed in the Guinness Book of Records as “the world’s largest drum parade,” this festival is probably one of the most colorful and musically impressive ones you’ll see in Japan. www.sansaodori.jp This article appears in the July 2016 issue of Tokyo Weekender magazine.