It was a decision that had been coming for a while, yet it still came as a major shock to his legion of fans. In 2000 Marty Friedman walked out on Megadeth mid-tour to embark on a new career in Japan. Since then the fearsome looking thrash metal guitarist has appeared on hundreds of TV shows, been in numerous commercials and performed alongside some of the country’s biggest stars, including many teen idols. Speaking to the Weekender from his home in Shinjuku, he informs us that his only regret was that he didn’t come out here sooner.

First, how did a guitarist from one of the most iconic heavy metal groups of all time get into Japanese music?
I heard enka in my late teens and the emotion of it just really grabbed me. At that point in my life I was at a crossroads in terms of guitar playing and needed a new influence. I didn’t want to go down the same route as everyone else, copying fancy guitarists like Al Di Meola and Jeff Beck, we didn’t need another person doing that. I was more interested in studying people like Aki Yashiro and Sayuri Ishikawa—both of whom I’ve since worked with—trying to do what they were doing with their vocals on my guitar.

I then later started listening to all kinds of Japanese bands and artists, particularly while touring here with Megadeth. I assumed people would be listening to international music in this country, but it was the complete opposite. I became interested in the domestic scene and just bought all these CDs and listened to them on tour. It got to a point where I was listening to 100% Japanese music all the time.

What did the other band members make of your musical tastes?
They thought it was really weird. I remember being at the back of the bus jamming along to Kohmi Hirose, a super-talented singer with an extremely high-pitched voice, it was really rocking in there. Then our bass player (Dave) Ellefson joins me, so here are the two of us playing along to this noisy, high-tempo Japanese disco music when (Dave) Mustaine walks in. You should see his face, “What the hell is happening to my band?” I couldn’t blame him; we’d taken a complete left turn. Everyone knew I had strange taste and was into discovering new things, but I don’t think they expected me to take it to the next level and actually quit the band.

It might’ve been different if Megadeth were constantly evolving and doing great new things one after the other, but it’s pretty much a one trick pony at that time as far as I was concerned. The shows were great but just too rigid; I was trying hard to act through it but you can only do that for so many hundred gigs in a row before something in your body tells you this can’t go on. Japan’s given me a chance to do a variety of things; the musical opportunities here are that much more glittering.

It has also given you the chance to work with groups like Momoclo and HKT48. Are you a genuine fan of pop acts like this?
Absolutely. Yes it’s super cute and goofy, but what’s wrong with that? Why can’t we have aggressive, high-energy music that is at the same time fun and happy? In America people tend to shy away from these kind of acts; they prefer listening to stuff like Adele, which is fantastic but it’s sad chick music. They’ll see an image of cheesy Japanese girls running around and automatically assume it’s for kids, yet if they actually listen to the songs they’ll know they are off the hook. Take “Heavy Rotation” by AKB48: it’s a great song on its own with complex chord changes, added to the fact that you have 48 charismatic girls performing it. As soon as you hear it you know it’s a huge hit. The main reason why the idol culture works so well here is because the music is solid; people wouldn’t buy into it otherwise. The writing process, the production: everything is just done so well. The live shows are also probably more fun and rowdy than many heavy metal concerts. You should see the preparation that goes into them: the formations, stage markings, time signature changes, it’s amazing. I remember being exhausted from trying to remember what I had to do for one song when I performed with Momoclo—they had 30 songs like that! In terms of arrangement and production, I would say it’s comparable to a band like Muse. It’s not an accident why these acts are so big.

Aside from the obvious, what are the other big differences between Japanese and American music?
To generalize, melodies are much stronger here. In America, it’s more about the lyrics, which should be written by the artist. This is a concept I hate: for me it’s the downfall of music and do you know who it started with? The Beatles. You used to have all these great song writers and then the Beatles came along—not only can they write well, but they also play. So what happens? Record labels start looking for guys who write their own stuff. The problem is not everyone’s as good as the Beatles, so you have all these [expletive] Beatles and Stones clones from the 60s and music just got progressively worse: it really sucked. The idea that if you don’t do everything yourself then it is not as good is something I wholeheartedly disagree with. Elvis Presley, Frank Sinatra—they never wrote a song. Aerosmith’s biggest hits were written by other people. If I’m enjoying it, I don’t care who was involved in making it. I think that is a view that is more accepted here than in the States.

Also in America they think if you can sing three octaves up to a high C it is something special: how stupid is that? Take a show like American Idol: as soon as a high note comes out the audience starts clapping like a bunch of monkeys. It’s as if high notes equal great music. In reality all it means is that the person has the tools to be a great singer. There’s no magic to it. In Japan there aren’t many super three-octave singers, but there are a whole lot of magical voices and that is what makes real art.

So you are not a huge fan of shows like American Idol?
I have no problem with the concept of the program, I just think it’s really negative: all these youngsters having their dreams crushed by these mean people. There’s nothing actually wrong with what the English guy [Simon Cowell] is saying, it’s not any different from what you’d hear at any record label, but seeing these contestants being shut down and told they are clowns who can’t sing—I find that hard to watch. Then it all finishes with some Celine Dion or Mariah Carey clone winning the thing. It’s not exactly stimulating, but that really doesn’t matter to the production companies.

At the end of the day shows like this appeal to the lowest common denominator and that is what TV is all about. Whether it’s a bunch of idiots walking around a house or a serious crime drama, all they care about is making sure they get sponsorship and that millions of people are watching. Even the news: how much of it is news you really need to know and how much is just entertainment? 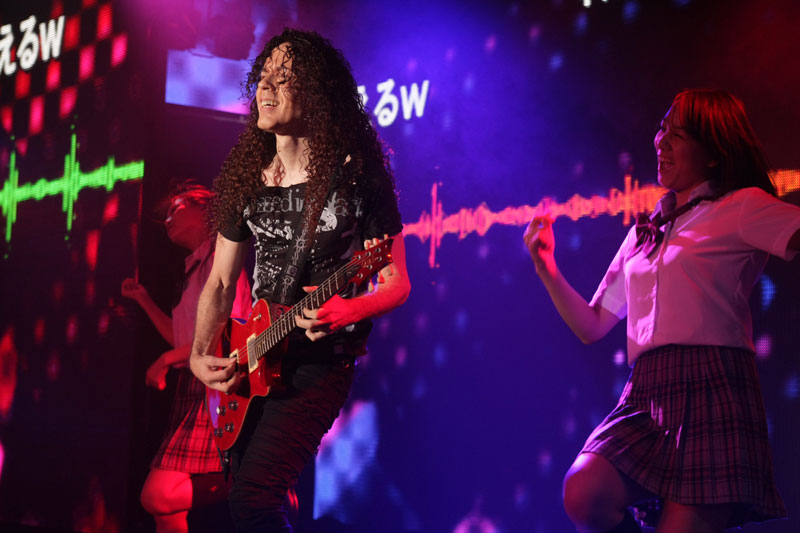 What are your thoughts on Japanese TV shows?
From a foreigner’s perspective they can look ridiculous and a lot of the time they are, but they grab your attention and curiosity. I remember one show where a guy could make anything out of candy: a desk, a table, or a sofa. They had celebrities come in and try to decide whether an item was real or candy and would then have to bite into it to check, so you’ve got these famous singers munching away at a fireplace or something, I mean what the….? It has no beneficial value whatsoever, but it makes you look and it’s funny. When I go back to the States I’ll turn on the TV and see two people talking in a drab room—it might be really interesting, but it doesn’t grab you like the programs here.

It may seem like disorganized mayhem, a bunch of whackos doing crazy things, yet in reality these shows are put together superbly well. I’ve done more than 600 of them in Japan—including educational, political, even cooking ones—and the amount of preparation and the speed at which they do things is still really eye-opening for me.

Going back to music, can you tell us about your new album, Inferno?
It’s extremely heavy and aggressive yet at the same time modern, definitely the most metal album I’ve done as a solo artist. It edges in a direction that I envisaged Megadeth going in and I think my fans from that era should be into the record. It’s my first American release in years so I wanted to come back big with no constraints. I wasn’t going to stop until it was the best thing ever. It took 15 months to make, but I really enjoyed it, particularly as I also had the opportunity to collaborate with some unbelievable artists.

It was incredible working with Jason Becker (Marty’s former bandmate from Cacophony) again. As you know he has ALS so he would send me stuff through his eyes on a computer. He’s such an inspirational person. Reading the emails he sent me you’d never know he was incapacitated. We’d say stuff like, “this sucks, what are you doing you idiot?” It was like nothing had changed, the only difference was that we’d improved massively as musicians. Skyharbor were also fantastic to work with. We did a song called “Steroidhead” together and the sound is so heavy and fresh. These guys play a sub-genre of metal known as djent: it’s really unique. I promise you in the next couple of years they will be household names.

Finally, who would you rank as the greatest metal band of your lifetime?
Metallica. They just get it right all the time; everything they do is cool and classy. I mean look at their products for fans—that Binge and Purge live box set for example, it had the tour itinerary, backstage passes, diaries, different live concerts . . . they just know what people want and give it to them. They are very few other bands out there—maybe the Rolling Stones and Led Zeppelin—who always get it right on such a large-scale.
Megadeth to some extent have done some things that have been really big, but when I look at Metallica I think they are pretty much the ultimate.

Marty Friedman will be playing live at Harajuku Astro Hall on September 24 & 25.