The 25th Tokyo International Film Festival will kick off on Saturday 20th of this month, presenting over a week’s worth of cinema from around the world.

Since its inception in 1985, the festival has been a showcase for quality movies, highlighting emerging talent in Japan and bringing the best foreign film to these shores.

The films are separated into various categories, offering a unique view from film-makers bound by a common theme or geographical region.

The Competition section brings together a selection of some of the finest films made in the past year, selected for their focus on three aspects, the nature of human beings, a reflection of modern times and the mark of a director showing skill, creativity and individualism; at the end of the festival, one film will be selected as winner of the Tokyo Sakura Grand Prix.

Last year’s winner Untouchable went onto become hugely successful in its native France and around the world.

The Special Screenings section shows high-profile films from around the world that have not yet been released in Japan. This section includes the Opening and Closing screenings which will be attended by guests associated with the film. This years opening film will be the world premier of Cirque du Soleil Worlds Away (pictured at the top) a 3D movie of the smash-hit show executive produced by Avatar director James Cameron.

Also as a Special Opening film, Japan In a Day will be screened. This unique documentary looks deep into the lives of real Japanese people, and is shot by the people themselves and executive produced by Ridley Scott.

The closing film of Tokyo International Film Festival 2012 will be Trouble with the Curve, which stars Clint Eastwood as an aging baseball scout bonding with a daughter he largely ignored as she was growing up. There will also be a good selection of Japanese films that will be released over the coming months that you can catch here first.

Asian film-making has been growing from strength to strength in recent years, and in the six years its been running the Winds of Asia – Middle East section has come to represent that trend. Covering the whole of Asia, this category is an excellent opportunity to catch some gems you might otherwise miss.

The Japanese Eyes section actively supports independent film making, searching out emerging talents as well as highlighting works by established directors making unique features. The World Cinema Section features high profile films in terms of cast and directors that have not yet been released in Japan.

These films are the works of world renowned directors and many have won awards at some of the worlds major festivals, now is your chance to see them early before general release.

The majority of the screenings will take place at TOHO cinemas Roppongi Hills (see the full schedule here) and as well as the films in the categories listed there’s a whole range of special events and screenings associated with TIFF, from all night screenings to special film programs and pre-festival events.

Check out the website for more information and keep checking the Weekender for updates and reviews of everything thats going on. Keep your eyes peeled for a chance to win some tickets: we’ll be announcing something in the next couple of days. 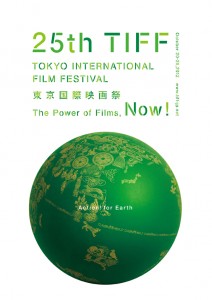 The Tokyo International Film Festival announces its arrival every year when, on the opening night, a green carpet is rolled out for its assorted filmmakers, celebrities and special guests. Made from the equivalent of around 51,000 recycled PET bottles, the carpet is not simply an attempt to do something different but is a symbol of the event itself and it’s continued efforts in environmental awareness.

The carpet was first unrolled, replacing the traditional red carpet, five years ago when the slogan ‘Action for Earth’ was adopted and all screenings were powered with ‘green’ energy. At this time the natural TIFF section was established as a showcase for works that highlight environmental concerns and work within the theme ‘symbiosis with nature’.

To this end, this year will see the screening of eight documentaries focusing on nature, mankind and environmental problems.