Green Getaways in the Concrete Jungle

There’s no predicting the weather in Tokyo at this time of year. As you read this, it could be chucking it down for the fourth day in a row, or it might be a window of glorious sunshine in the rainy season. Whatever the weather, Tokyo has some great hidden green­ery for a sunny afternoon now or the months of sunshine ahead.

Even if the day you choose requires a full set of rain gear, it’s worth the effort to explore one of Tokyo’s diverse parks. A few even look bet­ter in the rain.

Most of us prefer the convenience of the green patch nearest home or one of the big city parks, such as Ueno or Yoyogi, but the following selection of parks might make a nice change of routine. The criteria? That each be easy to get to, have better-than-average facili­ties and feature a unique attraction.

Well, OK, it probably qualifies as a big city park, there’s a charge (¥200 for adults, ¥50 for kids, under 6 free) and its early closing time (4:30 p.m.) robs you of that “hour of the pearl” in which parks glow. Still, for pocket change, you get loads of space — approximately 144 acres worth — and the money covers the expense of keeping the grounds spotless.

A post-war Imperial gift to the public, Shinjuku Gyoen is divided into thematically distinct zones. There’s a formal French jardin with plane trees and roses on the eastern edge. On the west side, a brooding maze of paths through pines is aptly dubbed Haha to Ko no Mori or “Mother and Child’s Forest,” as it’s often full of mother and child crows, some­times in attack mode. If you didn’t bring a helmet, there are several broad sweeping grass areas, English landscape-style, which are safer.

A string of pretty ponds, a series of hillocks favored by lunchtime lovers (R-rated buggy terrain), and the Eco-House Restaurant border the Japanese section of the park.

There’s shelter from the elements in one of the two tea houses, or within the extensive botanical glass houses (usu­ally open from 11 a.m.), where you can observe tropical palms, coffee and cocoa bean plants and ogle Japan’s largest citrus, a virtual bowling ball of vitamin C.

There are three entrances to the park, the Sendagaya, Shinjuku and Okido Gates. From the Marunouchi Subway Line at Shinjuku Gyoen-mae, take Exit 1, and it’s a one-minute walk to the Okido Gate (where parking is also available).

Known to foreign moms as the “¥100 Park” (though current fees are ¥200 for adults, ¥50 for kids), the park pro­vides a well-organized haven for little ones, with age-specif­ic play areas and the sense of security that comes from hav­ing the grounds enclosed.

During the summer months, a quarter of the park is given over to a boisterous BBQ beer garden (which fires up in late afternoon), where you can polish off the day al fresco.

The Outer Garden loop is often closed to cars on Sundays, and you can borrow a bike for free and tour the other options: a golf practice range, a baseball batting center and Meiji Memorial Picture Gallery, among other attractions.

About three minutes from Hiroo Subway Station is a gracefully landscaped gem named after Prince Taruhito Shinno Arisugawa, memorialized in the bronze military sculpture at the main entrance.

Steeped in a series of green plateaus, its waterfall, pond, huge trees and newly resurfaced play areas attract a global village of locals and ambassadors, dog-owners and fisher­men, lovers and lonely hearts. The central branch of the Tokyo Metropolitan Library shares the grounds, as do sever­al bronze sculptures. Though modest in size, Arisugawa hosts an amazing number of creatures; summer sightings of snakes, ducks, turtles, fish, bats and cicadas are not uncommon. For a walk on the wild side, try here at only ¥210 for adults and ¥60 for children. It’s an easy find from JR Meguro Station or Shiroganedai Station on the Namboku Subway Line.

Now classified as an Institute for Nature Study (hence kyoikuen instead of koen), this unclipped historical place has supposedly not changed much since the time it was property of the Shirokane clan.

Though there are a few decidedly unnatural additions (unless wooden steps pop up in swamps spontaneously), the park has been largely left to nature’s way, with enormous pines and delicate maples.

My son and his friend Yuki love to fill their pockets here with fallen seeds (which we have to empty out again), painters dot the landscape and, on a recent visit, shutterbugs gathered to snap pictures of gargantuan bullfrog tadpoles.

The park never feels crowded because a “pink ribbon” system keeps the count strictly limited to fewer than 300 vis­itors. The small educational facility is a little worn, but it  hosts Saturday morning hands-on events for children (tel. 3441-7176 in Japanese).

A bonus aspect — the institute runs right up to the gardens surrounding the Tokyo Metropolitan Teien Art Museum (garden admission ¥200 for adults, ¥100 for children above elementary school age). 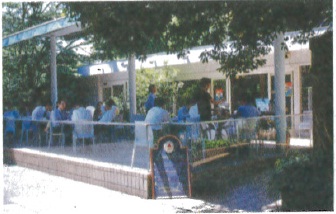 Go early for lunch on the terrace of the Cafe des Artistes — off to the left of the entrance gates — where you can enjoy a simple repast among butterflies.

Next, stroll though sculptures and roses on the estate grounds, find the tea house and well-stocked carp pool, then decide whether or not to take in the current museum exhibition within the immaculately preserved Art Deco former home of Prince Asaka Yasuhiko.

A short ride on the Tokyu Railways Toyoko Line out to Gakugei Daigaku Station and a five-minute walk west along the train line will bring you to Himonya Koen.

This charming neighborhood park features small rental rowboats on Benten Pond and short pony rides to the tiniest of tykes (¥150/ride; from age 2, with trained helpers to steady things along; morning hours 10-11:30 a.m., afternoon 1:30-3 p.m.). In addition, there’s an animal petting zoo and an excel­lent sandbox.

Buy food and drinks at the convenience store on the way; there isn’t much in the park itself. Tucked behind the Roppongi Hills residences and near the new ASIJ Nursery Kindergarten, it’s possible to think of this park as the stop part of “stop and shop.” Choose from a plethora of nearby restaurant options for lunch, then let the little ones loose on any of the 10 different-colored tube shoots, long roller-slide, six robot-riders, or various climbing spindles.

Unlike many local parks, this one was built with stringent safety features in mind — rubberized landing mats and wood chips cushion little legs. Once the trees grow in, it should be nicely shaded, too.

Finally, some things to consider. Parks, like museums, are usually closed Mondays (though the Teien Museum is closed on the second and fourth Wednesdays). It’s a good idea to bring tissues, a mat or plastic sheet to spread on the (often wet) ground, bug repellant, ice water, sunglasses and a hat.

If you’re with kids, add to your pack a change of clothing, washcloth, snacks, drinks, a small bucket of sand-tools and a basic First Aid kit. If you bring it all, you probably won’t need it, and vice versa. Happy parking!