A Slice of the UK in Tokyo: Mornington Crescent British Bakery & School

The art of British baking is one that the whole world has come to collectively appreciate in recent years. Mornington Crescent, a cooking school and bakery situated a scone’s throw from Tokyo Tower, exemplifies this thriving tradition. Its credentials are boosted by virtue of the fact that it’s run by Stacey Ward, a bona fide Brit who brings unbridled enthusiasm and authenticity. All of these ingredients have resulted in a recipe for success.

A Slice of the United Kingdom

Ward dreamed of living in Japan from an early age. As a university student, she became aware of the much-publicized JET Programme, which brings graduates from across the Anglosphere to Japan to serve as Assistant Language Teachers around the country. She took to Japan like a duck to water. The reality of the place more than met her childhood expectations and that ultimately led to her taking an entrepreneurial plunge in opening her burgeoning business.

A key aspect of Ward’s ethos is to present British bakes in their true form and not alter them in a way to accommodate the Japanese palate. “I never adjust to make something less sweet for Japan as I’m trying to create as authentic a bake as possible,” says Ward. “However, I find that traditional recipes, with all the custard, unsweetened pouring cream, use of nuts and tart cooking apples have a lot of variety in flavor and texture which appeals to customers here.”

Bramley apples, standard cooking apples used throughout the UK, have proved to be exceptionally popular. While they can be purchased all year round in England, they’re considered a strictly seasonal delight in Japan. Conversely, rice pudding has been one delicacy that’s been a little difficult for some Japanese to swallow. The unconventional combination of sweetness and dairy stands in marked contrast to what typically constitutes an East Asian rice dish. But it still has its firm supporters amongst Mornington Crescent’s student ranks. 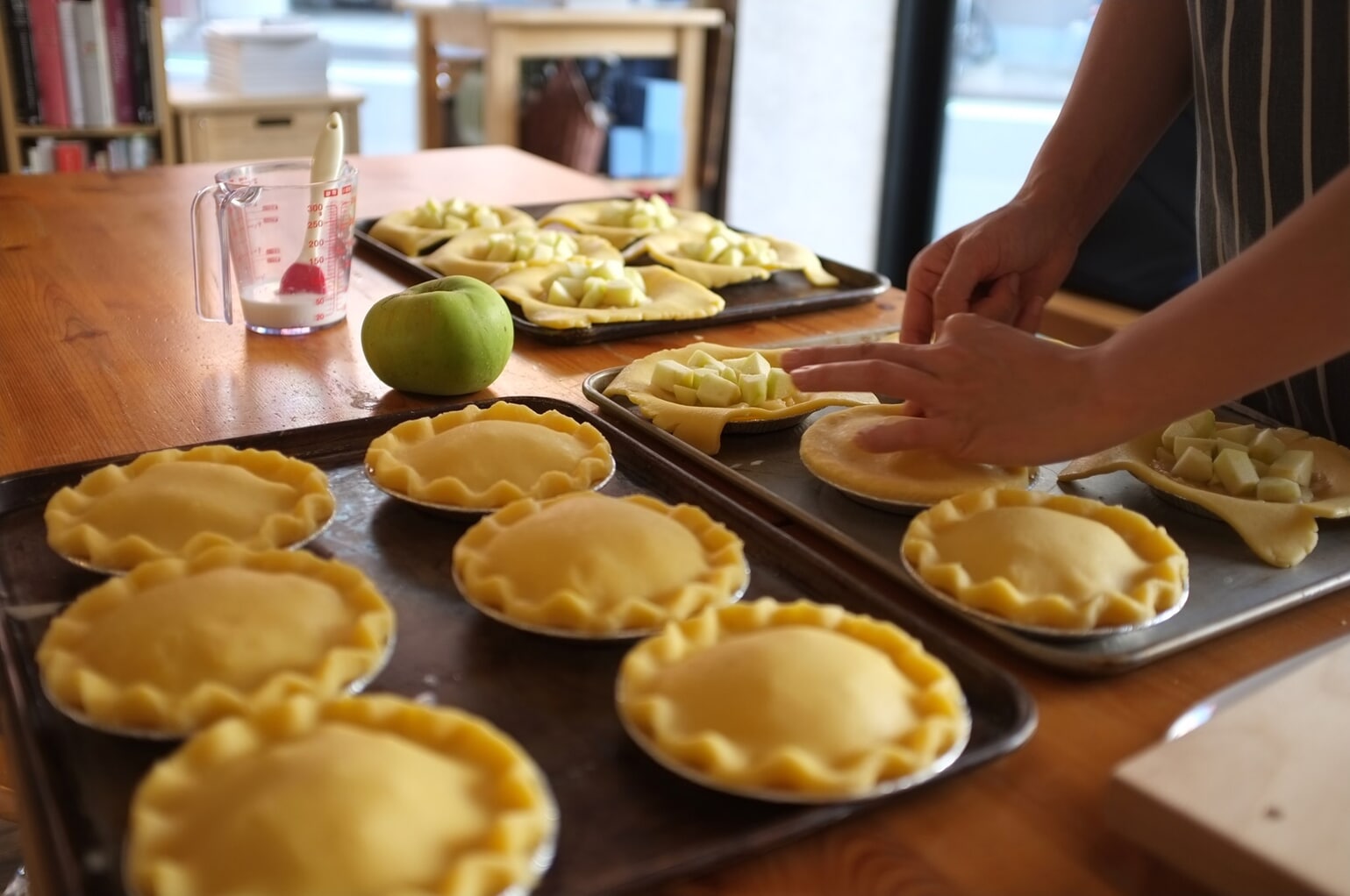 Many of Mornington Crescent’s students have been nurturing a burning passion for all things British, while others have a general desire to learn more. “The students have various motivations. They love hearing stories about the sweets. How they connect to festivals like Easter and Christmas and how and when we eat them. Others are studying tea and want to learn to make sweets to go with it, potentially opening a tea salon. Some students are professional bakers in other fields, curious about British home baking and others are complete beginners looking to try something fun. I try to understand what that day’s students are particularly interested in and tailor the class to them.” No two students are the same, and Ward tries to harness each individual’s personal background into their baking. More than 10,000 apprentices have honed their culinary skills at the school since opening and there are presently over 100 eager pupils who attend classes on a frequent basis.

Mornington Crescent’s stellar reputation now precedes itself. Regular students have partaken in extensive commutes, including one weekly devotee residing in Nagasaki and another who happily hops on the Shinkansen from Sendai. Café owners from as far afield as South Korea have taken lessons in person. Hopefully, such journeys will be repeated once normal international travel resumes.

One recurring comment from learners of all origins is how splendidly simple so many of the recipes are. Whether crumpet connoisseur or fudge fanatic, there is something for all tastes. The pandemic has naturally resulted in the business needing to reshape and modify to meet the unprecedented crisis.

“It’s been a difficult time,” admits Ward. “I’ve been determined to keep my staff on and keep paying their wages. However, with the recurring state of emergencies and surges in cases in Tokyo earlier this year, I felt it was unwise to hold in-classroom lessons. We adapted and did a lot more online.”

Mornington Crescent has weathered the storm endured by so many small businesses and is looking to the future while learning lessons from the past. Online sales have increased in quantity and variety. With online lessons, those who would never have had the opportunity to visit in person have found an unexpected avenue to connect. Students now have access to an archive of more than 30 videos jam-packed with easily digestible information. Live lessons hosted on Instagram have also proven a big hit. In addition to its status as the premier British baking school in Tokyo, Mornington Crescent throws open its doors as a regular bakery for a couple of days per month. They stay open until they’re sold out for the day, which tends to happen rather quickly. It’s therefore advised to arrive as early as possible to avoid disappointment.

A compilation cookbook of the bakery’s most delectable recipes has been authored by Ward and can be purchased directly from the shop’s website. Featuring a plethora of treats and the techniques behind them, ranging from hot cross buns to Victoria sponge cake, the volume’s simple instructions are displayed in both Japanese and English. Ward has mastered the language of her adopted homeland and attributes much of her business success to this proficiency. She encourages those who wish to establish their own brands in Japan to try their best in following her example.

The simplicity, informality and approachability of British baking has ensured its survival in a land far from its inception. Ward has crafted an institution that’s as dependable as a warm cup of tea on a cold winter’s night. Mornington Crescent is within walking distance from either Akabanebashi or Azabujuban stations via both the Namboku and Oedo lines.

For more British delights, check out The British Culinary Renaissance: A UK Food Scene is Blossoming in Tokyo.

For more international food in greater Tokyo, check out our Rare Foodie Finds.

All photos courtesy of Mornington Crescent.