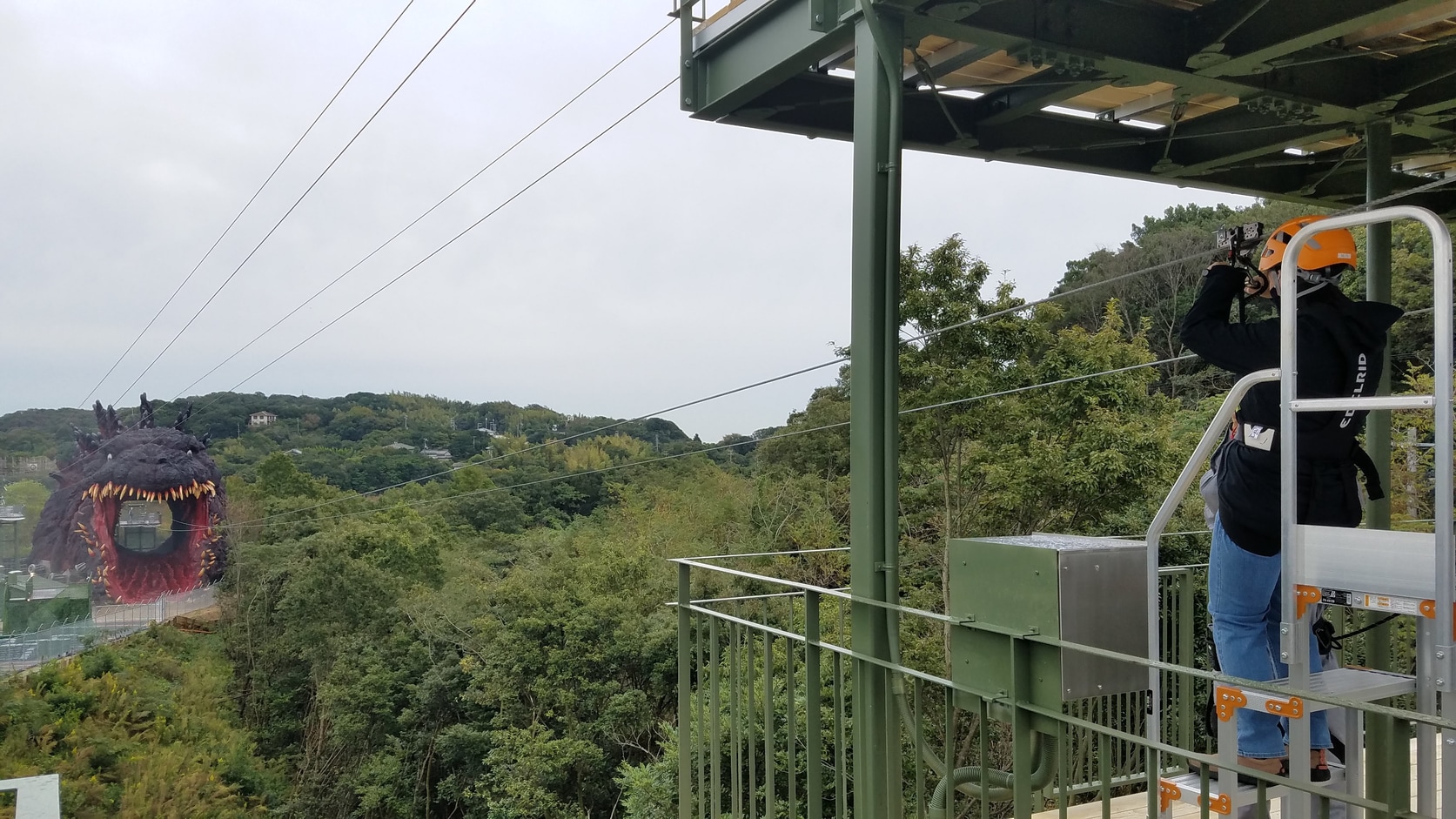 Travel to Awaji Island and Zipline Into Godzilla’s Mouth

Depending on what kind of kaiju monster fan you are, ziplining into Godzilla’s mouth might be a nightmare or a dream. Either way, you can now try exactly that at Nijigen no Mori on Awaji Island. Known as the “Godzilla Interception Operation Awaji,” it opened in October 2020. The Godzilla attraction, developed with Toho Studios consists of a short film, zipline, shooting game, museum, a shop and themed food. Awaji Island Has Always Been Legendary

Awaji Island is in Hyogo Prefecture, southwest of Osaka. The island is located on the Seto Inland Sea between Honshu (Japan’s main island) and Shikoku. The world’s longest suspension bridge, the Akashi Kaikyo Bridge, will get you there by car. You can also reach the island via ferry or by bus.

According to the ancient Japanese texts, the Kojiki and Nihon Shoki, Awaji Island was the first of the Japanese islands. It is also famous for its onions and for the Naruto whirlpools, formed by the collision of the currents that run through the Seto Inland Sea and the Pacific Ocean. Due to the impact of the coastline and the seafloor, the vortex reaches 30 meters in diameter, making it the largest of its kind in the world. Why is Godzilla on Awaji Island?

The fun begins with an introductory video explaining how Godzilla came to be incapacitated and dormant on Awaji Island. No, he wasn’t attracted to onions. It’s a great film, with high production standards, during which you’re invited to become a member of NIGOD — the National Awaji-Island Institute of Godzilla Disaster.

And that membership comes with gear and a mission. After getting kitted up, you listen to a safety briefing before heading up to the zipline platform. You can choose to either zipline to the side of Godzilla (152 meters in length) or into the mouth of the dormant Godzilla (162 meters). A clear case with a neck strap is provided so you can take videos and photos without worrying about dropping your phone. The Godzilla head itself is 55 meters long, 25 meters wide and 23 meters tall. It’s not the most intimidating zipline on Earth, but definitely one of the most unique. Seeing the mouth of the life-size Godzilla rushing towards you is one of the most surreal things one can experience.

Other Godzilla Attractions at Nijigen no Mori

Sadly, unless you were to buy another ticket for the entire attraction, you only get one go at the zipline. On the bright side, there’s much more to do at the Godzilla attraction.

For one, there’s the “Anti-Godzilla Cell Sniper Operation” shooting game. The aim is to remove scattered Godzilla cells spreading from the inert Godzilla — as many as possible in two minutes, shooting when the cells light up. It’s quite a physical experience, as you’re ducking when the siren warns you of a “high energy reaction of Godzilla cells.” The Museum of Godzilla on the premises is the world’s first permanent Godzilla museum. It’s co-created with the Toho Visual Art Company — the team behind the special effects in the Godzilla movies. The museum features over 100 exhibits including costumes, props and production art from many Godzilla films. That includes the main character as well as Mothra, Rodan, Destoroyah, Biollante, King Ghidorah and many more kaiju favorites. There are also fantastic dioramas that recreate classic scenes from some of Godzilla’s biggest hits.

The shop sells a comprehensive range of Godzilla goods, including some exclusive Awaji Island NIGOD merchandise.

Nijigen no Mori is a theme park of sorts with attractions themed around popular franchises. There’s also a Naruto and Boruto zone and a Crayon Shin-chan Adventure Park. If you have stuck around to see Godzilla after sunset, it lights up. Also after dark, you can enjoy the Hi no Tori multimedia night walk featuring the Tezuka Osamu creation of the same name. The park offers an extensive range of dishes featuring Godzilla and friends. A popular dish is Godzilla curry, made using Awaji onions, the island’s most famous export. Then there’s the Godzilla Mabomen that features some impressive Godzilla tofu artwork and the Waffle Chicken inspired by Monster Island, the fictional home of the kaiju in some versions of the franchise.

Entrance to the Godzilla Experience is ¥3,800 for those aged 12 and older, ¥2,200 for children aged five to 11. It is free for children under four. Tickets for Nijigen no Mori’s other attractions must be purchased separately.

As is the case for most popular theme parks, getting there early is best, especially on weekends.

Watch what it’s like to zipline into Godzilla’s mouth here:

Godzilla fans, wait — read these before you go:

Rediscover the Best (and Worst) of Godzilla