Slowly falling in love with Izu City and its misty forests and waterfalls, sprawling greenery, volcanic testaments and literal goldmines

One of the few blessed areas in Japan to be sitting at the foot of the holy Mount Fuji, Shizuoka Prefecture is indeed overflowing with abundant nature and long-standing culture. Particularly Izu Peninsula is an absolute favorite of Tokyoites, being a true getaway, yet just a couple of hours away. Think of endless sprawls of green – hiking trails in forests, tea fields, wasabi farms, golf courses and more. Izu City is known for all of those, with a towering Mount Fuji view as a bonus.

Think of pristine water – whether it’s cascading in waterfalls, irrigating the crops or helping make high-quality sake, wine and craft beer. Think of all the treasures inside the earth – gushing hot springs, gold mines, the roots of everything tasty and beautiful. Izu City has it all, enriched by its people who have been building temples, onsen towns and ryokans, guesthouses, and restaurants, for centuries. And they are always willing to share the beauty with anyone who visits. Located in the hilly center of Izu Peninsula, Shuzenji is an easily accessible good starting point for a three-day getaway. The JR Tokaido Shinkansen train stops at Mishima Station, which is close to Shuzenji Station and Shuzenji Onsen Station connected by railway. Named after a famous Buddhist temple, it’s no wonder the charming area exudes zen. Its other nickname is little Kyoto, as Shuzenji Onsen Town’s bamboo forest path alone evokes Japan’s old capital. It’s all that beauty of traditional Japan concentrated in one spot. Most visitors dress up in a yukata or kimono, walking around, or sightseeing on an old-timey rickshaw – all activities recommended by the locals. While in Shuzenji also seek out the local sake from Izu Bandai brewery or visit the taproom at Baird Beer Brewery Gardens Shuzenji. A quick bus ride from Shuzenji Onsen takes you to Darumayama Kogen Rest House Observation Deck for a sweeping view of Mount Fuji, Suruga Bay and Awashima Island. Driving or cycling along the Nishi Izu Skyline road, or hiking the nearby Izu mountains, will yield the same majestic views. In spring, mid to late April, you can see the mamezakura cherry blossom variety near the summit of Darumayama. Shuzenji explodes with pastel cherry blossoms of all kinds, but the small dainty mamezakura variety is rarer. For plum blossoms, there is the Shuzenji Bairin area with more than 1,000 plum trees, some more than a century old. Best time to see them blossom is from mid-February to early March.

Bonus for those looking for a fun story to tell: visit Shuzenji Niji no Sato (Rainbow Village) for a very believable replica of a 17th-century English village. It’s only one part of Niji no Sato though, along with a traditional Japanese village replica named Takumi Village and a beautiful nature garden known particularly for fiery autumn leaves (best viewed from mid-November to early December) and spring pink cherry blossoms (from early March to mid-April). When night falls the bamboo forest and all of Shuzenji Onsen light up, resembling a Japanese fairytale scene with the rising steam from the natural hot springs and the town’s tranquility. It’s perfect for night walks and dipping your tired feet into the free ashiyu foot baths along the Katsuragawa River, Tokko no Yu being the most central and famous one. Tokko no Yu is the oldest hot spring in the Izu Peninsula and it’s from where all of the hot springs of Shuzenji Onsen Town originate.

Onsen towns like these are perfect for a relaxed stay. SORA Togetsusou Kinryu is an elegant, traditional hotel with an award-winning illuminated bath, in addition to a traditional Japanese garden. The hot spring inn Arai Ryokan, also near the bamboo forest, is like an architectural museum with comfortable rooms and mouthwatering cuisine. It is an inn that is one of Japan’s registered national cultural assets. Diving further into all the wonders of the Izu Peninsula, the Nakaizu and Amagi Yugashima areas offer the wild pristine nature sights everyone is talking about. Joren Falls, officially selected in Japan’s top 100 best waterfalls, drops from 25m in a lush green forest, with wasabi farms nearby. The valuable plant thrives only in crystal clear flowing water and a lot of it, hence Izu City producing high-quality wasabi. Shops sell fresh wasabi roots, local handmade wasabi pickles and sanbaizu (a popular pickling liquid), as well as wasabi ice cream for a taste bud adventure. This is just one of many breathtaking waterfalls in the Izu Peninsula, and not visiting at least one would be missing out. More rugged natural beauty can be admired in the Namesawa Gorge geopark, formerly a lava river now filled with water and lined with trees that go lava-red in autumn. The river also creates the Dragon Falls, or Ryutaki. Another misty mountain view is offered at the end of the old Meiji-era, Mount Amagi tunnel, combining nature with human skill, a spot especially popularized by writer Yasunari Kawabata.

The rich nature of Izu has also proven vital in recent wine-making efforts, evident in Nakaizu Winery Chateau T.S. The vineyard evokes European wine country – with the addition of a gorgeous Mount Fuji view. It’s an escapist paradise and a culture crossover, with Hotel Winery Hill being a great place to stay the night and travel some more without going anywhere. The luxurious Arcana Izu resort offers creative fine dining, self-pampering, and outdoor baths overlooking a mountain stream surrounded by foliage. To the west of Izu City lies Toi, home to Japan’s second-largest goldmine that was open for almost 600 years, and is now the home of the world’s largest gold bar according to the Guinness Book of Records. A long stretch of the 100km mining tunnel is turned into a tourist attraction, along with a museum, and a chance to try gold panning for yourself – and keep the gold. Toi is also known for its daruma dolls temple simply called Toi Daruma Dera and of course full of the traditional dolls.

Heralding spring, Toi has some of the earliest cherry blossoms in Japan, blooming with the start of the year in January. Many of these Toizakura trees can be found around the Toi goldmine and all over the Toi area. And no matter the season, you can head to Lover’s Cape for some stunning views of the shimmering sea, the golden sunset, and Mount Fuji rising above the sea, year-round. Whether partnered or not, you’ll at least fall in love with Izu City. 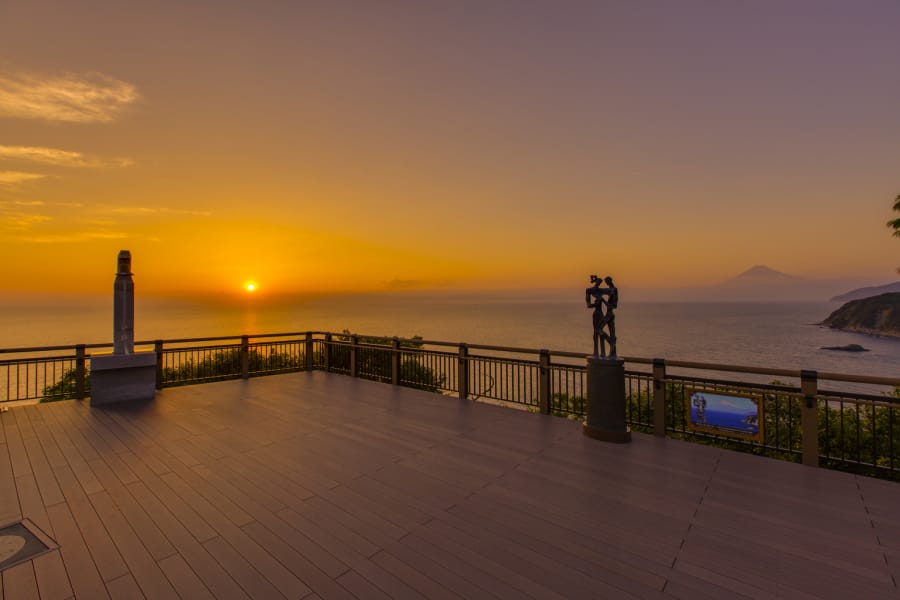