Take trip back to the Edo Period at one of these historic towns around Japan, from Tohoku to Shikoku

With their charmingly retro architecture and atmosphere, these traditional towns around Japan offer a glimpse back in time to the Edo period — perfect for a strolling weekend getaway. As a handy guide for you, we’ve grouped them into regions, and offered a few suggestions on when to go, and things to do while there.

Kakunodate has retained the same city layout since 1620, where samurai living quarters and merchant districts were separated into the northern and southern sides of the city. Here, you can stroll along the same streets as samurai — and even visit their homes! About 80 samurai families used to live in the district and many of the houses are well-preserved and open to visitors. When to go: Late April to early May

What’s on: The Sakura Festival, where an extraordinary canopy of weeping cherry blossoms hangs over the jet-black walls of the samurai houses.

More things to do in Akita here.

Ouchi-juku lies nestled among the mountains and was a flourishing post town along the Aizu Nishi Kaido back in the Edo period. It was an important thoroughfare for lords traveling to Edo and for the transportation of rice to the capital, as well as an important connector between castle town Aizu Wakamatsu and Imachi (Nikko). During the modernization of Japan during the Meiji Restoration, railways were built far from the area as a punishment for Aizu Wakamatsu’s samurai revolt against the new regime, allowing it to retain its traditional thatched-roof houses. What’s on: The Hange Midsummer Festival at Takakura Shrine features a procession of white-clad men sporting black eboshi caps and tengu masks. It dates back over 800 years and remains a unique celebration in Japan.

Click here for more things to do in Tohoku

Skirting the border of Ibaraki Prefecture next door, Sawara is the name of a historical district in Katori City. Formerly an independent city, Sawara had a nickname similar to Kawagoe’s: Edo Masari, which means “superior to Edo” – they weren’t shy about their prosperity, and the city thrived in the past thanks to its many connective waterways. Now the rivers and canals are mostly trafficked by tourists on boat rides, which offer a lovely view of the traditional residences, stores, and warehouses on either side of the water. When to go: May to June

What’s on: The Ayame Matsuri, a festival where 1.5 million irises of 400 varieties bloom in the Suigo Sawara Aquatic Botanical Garden.

More things to do in Chiba here.

Affectionately known as “Little Edo,” this bustling city is only a 30-minute train ride from Ikebukuro (45 minutes if you leave from Shinjuku). Once there, take the charmingly retro Co-Edo loop bus (¥500 for a day pass) to reach the main attractions in style and to get discounts at some of the shops. Highlights include the Kurazukuri (old storehouse) district, where you’ll find one of the area’s most famous landmarks, the Toki no Kane (Bell of Time) tower. Find Kashiya Yokocho (Penny Lane Alley) nearby, lined with quaint sweet shops and cafes. Head further out to avoid the crowds and to explore a slew of serene temples and shrines. When to go: End of July

Check out things to do in Ikebukuro, before or after your trip.

Asuke, a 30-minute drive from Arimatsu, lies on an old side road of the Nakasendo Trail, known as the Ina-kaido road. Because of this thoroughfare, the city flourished. This prosperous history is still visible in a two-kilometer stretch of old storehouses with white plaster walls and imposing houses with black wooden fences. The people of Asuke have worked hard to preserve this area, removing unsightly power lines from this stretch of road so that visitors can enjoy an unrestricted view of the area. Keep an eye out for tiny side streets with charming little shops hiding down them.

When to go: November 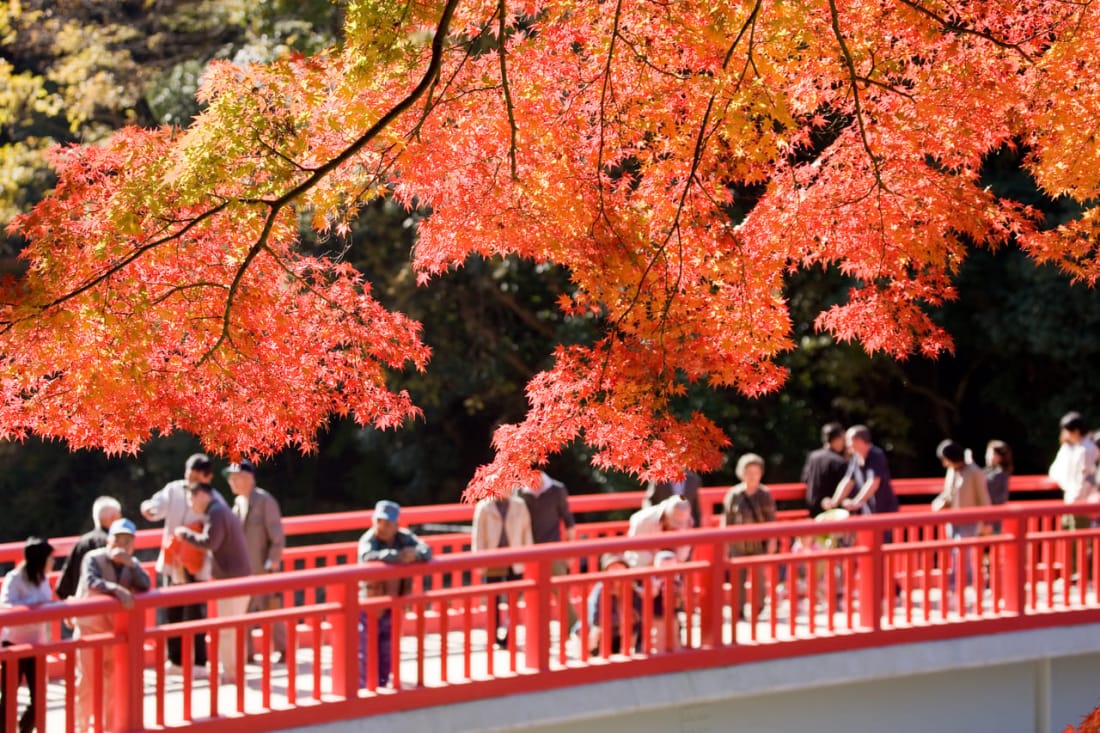 Arimatsu is a post town on the Tokaido Trail, which was one of the main thoroughfares along with the Nakasendo Trail. The area became famous due to its unique method of tie-dyeing. Arimatsu Narumi Shibori dates back to the earlier 17th century, and the complex patterns artisans produced became extremely popular with merchants and samurai passing through, who bought the dyed cloths as souvenirs. Not only that, but the post town’s success was further solidified when a local feudal lord banned any reproduction of the method elsewhere. Arimatsu, like Asuke (above), has removed power lines along the main historic area. When to go: Beginning of June

What’s on: The Arimatsu Shibori Festival features shibori demonstrations by artisans, dyed cloths on sale, and the usual matsuri fare.

Get more info about the Nakasendo Trail here.

This old castle town has two exceptionally well-preserved areas in town, known as the Kajiya machi and Shokunin machi respectively. The houses here used to belong to craftsmen, blacksmiths, and carpenters, with their workshops on the ground floor and lodgings above. A few artisans can still be found plying their trade in the area. Keen observers will notice the narrow water channels along the streets – these are still used today, both for fire prevention and for daily household use, like rinsing vegetables. Be sure to stop by Sougian Matcha, a café inside a traditional old house that overlooks the river.

When to go: Mid-July to early September

What’s on: The annual Gujo Odori (bon odori) dance festival, which lasts a total of 31 days, mostly on weekends. There is an intense four-day period in the middle of August where the dancing goes on every day (and night)! Magome-juku is one of many picturesque post towns along the Nakasendo Trail. This feudal highway was one of the main connections between Edo, the shogun’s home, and Kyoto, where the emperor resided. The steep slopes of this sleepy town have greeted weary travelers for centuries and though time has passed, the town has changed little. Lattice-windowed buildings still line the streets, though the businesses inside them may have changed. You’ll find old houses as well as souvenir shops, tea houses, and ryokan.

When to go: Spring or autumn

What’s on: The delicate cherry blossoms and bright red autumn foliage look stunning against this traditional backdrop in Magome-juku. Mino City has flourished for over 1,300 years thanks to the skill of its washi artisans. Famed across the nation for centuries, Mino has benefited from its trade, and it’s still visible in the architecture throughout the main street. The long rows of wooden houses — beautiful in themselves — display udatsu decorations on the rooftops between the buildings. The udatsu, essentially raised walls between houses to prevent the spread of fire, were often elaborately decorated as a way to show off the prosperity of the owner. The more intricate the design, the richer the merchant — and thanks to its historic washi trade, the whole town was extremely rich. When to go: Early October

What’s on: The annual Mino Washi Akari Art Competition and Exhibition, featuring illuminated washi sculptures made by professionals and amateurs alike. If you can’t make it to the festival, there is a museum open year-round where you can view the winners from the previous year.

Find more things to do in Gifu here.

Located in Kanazawa, the former entertainment area of Higashichaya used to be a lively area with geisha and their clients. There used to be four such areas, with Higashichaya being the largest. Drop by on a Saturday for a throwback to these times when the local tourism association holds a geisha performance show. Make sure to check out the side streets, as although the main thoroughfare is impressive, it’s the back alleys that hold all the charm.

The nearby Nagamachi Buke Yashiki District is in stark contrast to the Chaya area, as the old samurai houses in the area are surrounded by mud walls, giving a more muted atmosphere to the town. When to visit: The first Friday, Saturday and Sunday of June

Here are more things to do in Ishikawa Prefecture.

Out of the Tokaido Trail’s 53 stations, Seki-juku was the 47th on the way to Kyoto, from Edo. Serving as a junction between the Tokaido Trail and the Yamato-Kaido (which led to Nara), it was an important meeting point for many traders and travelers. It still boasts a two-kilometer area of 200 machiya (traditional wooden townhouses) is the largest of the remaining post towns on the Tokaido Trail. Despite its size, the tourists are still few, making it an ideal spot to soak up the atmosphere without having to battle the crowds. When to go: Mid-July

Go find more things to do in Mie Prefecture here.

Nagahama is a port city nestled on the eastern coast of Japan’s largest lake, Lake Biwa. The old Hokkoku-kaido Trail cuts across the center of Nagaham’s old town, Kurokabe Square. Since 1989, locals have made efforts to preserve the town’s historic atmosphere by renovating and repurposing old structures and building new ones that match the atmosphere. Here you’ll find a mixture of rustic cafes, museums, glass workshops, and temples to delight and entertain the whole family. 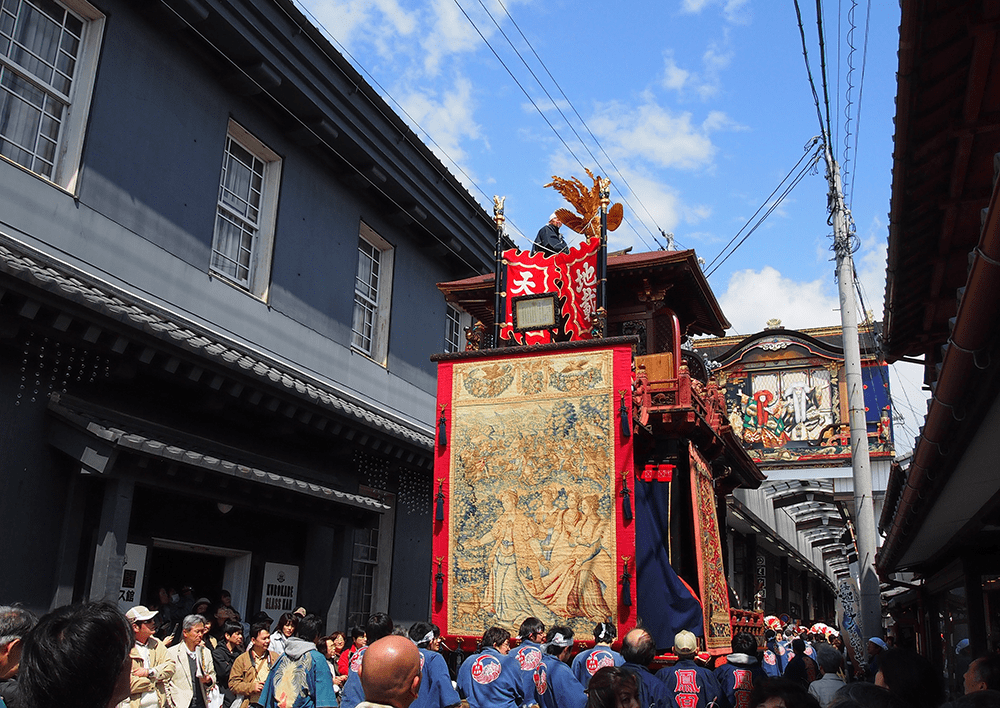 Back in the old Edo days, Kurashiki was a prosperous town thanks to its strategic position on a river connected to the Seto Inland Sea. The Kurashiki Bikan Historical Quarter (“bikan” literally translates to beautiful views) still has centuries-old buildings and shops lined across the river. Boatsmen ferry tourists along the water in the preserved canal area. The area isn’t just beautiful though — it’s a cultural center with several art galleries and museums.

The Ohara Museum of Art exhibits works by European masters El Greco and Monet, while nearby Japan Rural toy Museum displays toys from the 1600s to the 1800s. The Archaeological Museum, located inside a restored rice granary building, has unique displays of excavated artifacts from the ancient Kibi region. When to go: Any season at sunset and beyond

What’s on: The Kurashiki Canal and Ivy Square are lit up every evening at sunset. The illumination was designed by world-famous lighting designer Motoko Ishii and shows the Bikan Quarter in the best light.

Find more things to do in Okayama here.

Want to explore the Edo atmosphere closer to home? Check out these 7 old Tokyo spots.