This lushful corner of Japan, located at the never north of Honshu, can tick all your travel boxes – no matter when you visit

In the brisk northern reaches of Honshu, far from the urban sprawls and madding crowds, is Aomori Prefecture. A land renowned for its sugar-pumped apples and locally-brewed nihonshu, for its harsh winters and thick-as-paint dialect, and for an aggressively beautiful coastline matched in grandeur by the volcanically active Towada-Hachimantai National Park.

To get a taste of life in Aomori, which is just three hours from Tokyo by shinkansen, Towada-Hachimantai National Park and its surrounding areas are pretty good places to start. From admiring the daring modern art centerpieces at the Towada Art Center to walking under a cosmic blanket of stars in the park’s forest by nightfall, here are some recommendations to get your trip to Aomori underway.

As part of a project designed to reinvigorate the city of Towada through art, the Towada Art Center opened its doors in 2008. The neo-urbanist complex is impossible to miss, with its distinct main building in the shape of a large, white, cuboid; street-facing, glass-paneled corridors; and 16 spacious pavilions. Dotted around the perimeter is a series of even more ostentatious works, including a galloping horse covered in psychedelic flowers, a giant red leafcutter ant, and a polka-dotted pumpkin and mushroom sculpture set that bears the unmistakable artistic signature of Yayoi Kusama.

The current lineup inside is equally impressive, featuring artists whose work has been lauded both in Japan and internationally. The ‘Standing Women,’ from Australian-born artist Ron Mueck, is one of the highlights. This sculpture of a buxom old woman stands almost four-meters tall, yet it is the realism of her steely gaze and bulging veiny skin – a specialty of Mueck’s work – which leaves the most lasting impression.

Another piece that gives its viewers plenty of food for thought is ‘Cause and Effect’ by Do Ho Suh: tens of thousands of miniature resin humanoids straddling each other’s shoulders, which dangle from the ceiling to form a giant reddish-orange stalactite. The piece hangs in a large, airy room that faces onto the street, feeding into the museum’s concept of art being opened up to the city.

The ‘Bridge of Light,’ a hexagon tunnel of lights by Ana Laura Alaez, and ‘Location (5)’, a blacked-out American diner accompanied by a swinging 50s soundtrack from Hans Op De Beeck, are among the other quality works on display.

Approximately one hour by car from the gallery is Towada-Hachimantai National Park, which covers an area of over 320 square miles and straddles three different prefectures. The dynamic landscape is marked by several impressive geographical features, including the eponymous Towada Lake, a large body of silky-smooth water set within a caldera formed around 200,000 years ago. 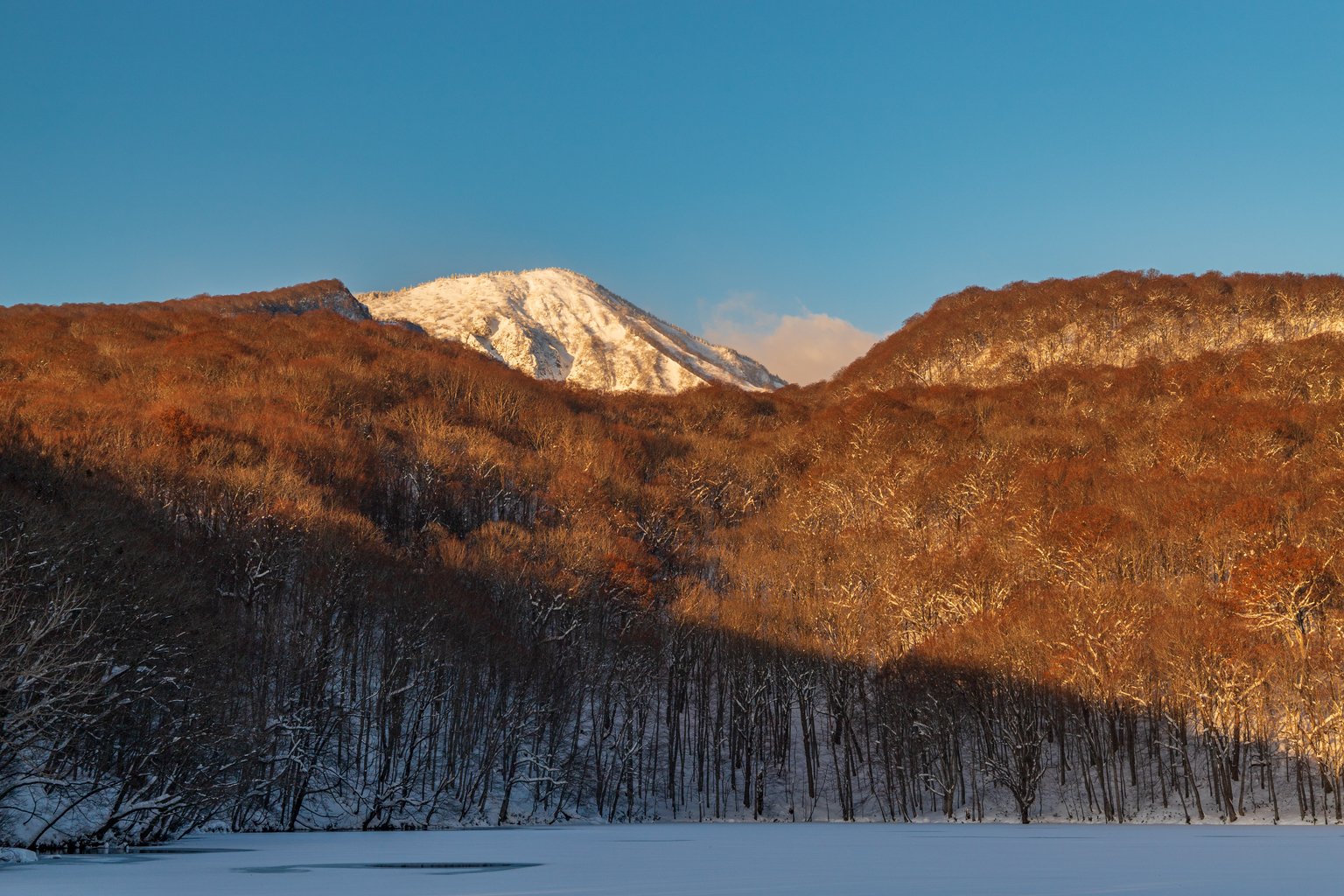 The Oirase River, the only major water channel to run through the park, scythes through mossy forestscapes and tumbles down frothy waterfalls, providing great shots for photography enthusiasts. While the park is also home to several mountain ranges, including the Hakkoda range in central Aomori Prefecture, of which Mt. Odake, renowned for its pretty alpine flora, is the tallest (1,585m).

One of the best ways to experience as much of Towada-Hachimantai National Park as possible is via a guided hike. Under the tutelage of an expert guide you can trek through the park while learning about its rich biodiversity, which includes Japanese serows, Asiatic bears, golden eagles, tree frogs, flying squirrels, and rare flowers such as the komakusa (horse plant).

In the colder months of the year – which is much of the year in Aomori – why not finish off your day with a kaiseki dinner made with seasonal ingredients and a stroll beneath the stars before sinking into an onsen bath? Tsuta Onsen, a traditional ryokan located within the park’s boundaries, is an excellent option to experience all of the above. 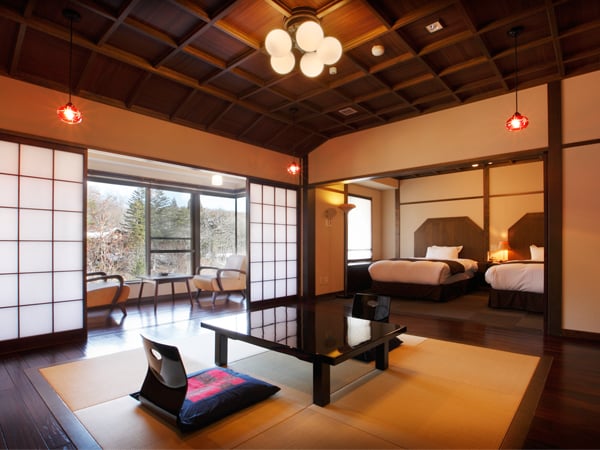 Again, you can expect scenery here that changes quite vividly with the seasons; when autumn segues into fall and the fiery leaves are accompanied by the season’s first signs of snowfall, it looks particularly resplendent.

The kaiseki meal components will also change with the season, but as Aomori is Japan’s unofficial home of the apple, you can expect to see these fruits entering the fray in some shape or form. Locally sourced vegetables, seafood and meat served in elegant kaiseki fashion are also likely to appear. For the imbibers out there, be sure to sample Tsuta Onsen’s original nihonshu with your evening repast.

Forest bathing, or shinrin-yoku, is a vogue term in the world of wellness travel. But how about ‘starbathing’?

One of the factors setting Aomori apart from many other areas of Japan is its relative isolation. When you have such isolation from the artificial glow of the cities, combined with a night of cloudless skies, the cosmos opens up like a snap from the Hubble Space Telescope. Accompanied by knowledgeable local guides, you can walk through the forest by torchlight. Your senses will enliven as every distant sound is amplified through the corridors of beech trees, as you become aware of every snapping twig underfoot, and as each drifting smell carries with it a million questions.

The walking path from the ryokan leads to the shores of Tsutanuma (Tsuta swamp), where you can turn off your torches for the star-spangled firmament to slowly reveal itself as your eyes adjust. On clear nights you can see the Andromeda galaxy in all its glory, the iconic Subaru star constellation (which is painted on the Japanese car manufacturer’s emblem), Orion the Hunter, Dippers Big and Little, and even Mars piercing the sky like a faded ruby.

For help with organizing the activities above, Deneb, a Japan-based destination management company, can do the legwork for you. They focus on customized trips that accommodate guests’ specific needs while supplying trained local guides and private transport services. 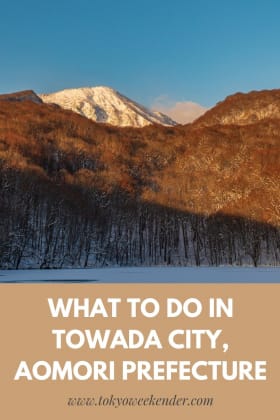 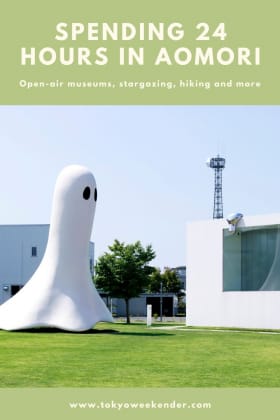