Autumn leaves in the Kyoto air, a winding path on a hill, lined with centuries-old houses and stores, leading up to Kiyomizu-dera, a symbol of Japan’s ancient capital, amply remind you of fond memories from your previous travels.

It has been countless months since many of our travel plans were derailed. While some tourism operators try to make traveling safer and more affordable, Triad Inc., an Osaka-based design company, created a gateway to our imaginations.

The Omoshiroi Block notepad, opens the door to year-round destinations ripe for exploration in the safety of your own home. As you peel away layer after layer of quality notepaper, your favorite travel spots such as Asakusa’s Kaminarimon Gate, the Osaka Castle and Chicago’s skyline, emerge like a sculpture with details that blow your mind away.

The price tag is equally mind-blowing – ¥10,000 apiece. But these pricey “post-it” win accolades for their painstaking craftsmanship. They are first graphically designed on the computer, then precision-sliced using a laser cutter, and then assembled together by hand.

Japanese Ingenuity on Full Display in a Notepad Users’ imagination is stirred by the built-in experientiality. Like an archaeologist at a dig site, the treasures can only be unearthed by tearing away sheets one after another as the landscape slowly emerges. At the end of the journey, you are left with a piece of art gracing your home office desk or cabinet.

“These notepads are one of a kind,” said Seann Eschrich, e-commerce manager for OMG Japan, an online retailer of sundry Japanese items for customers abroad, including everything from Japanese language textbooks to souvenir goods. “I think it’s a conversation piece for their desk.”

The initial customer reaction when Omoshiroi Block first went on sales with Kiyomizu Temple in early 2018 was so overwhelming, it was immediately sold out, according to Triad.

“The point of the Omoshiroi block is not the functionality, but rather the aesthetics,” said David Davies, 29, a biomedical scientist from Manchester, UK, and a stationery connoisseur. “Japanese stationery is vastly superior to what I see in the UK. I quite often bring home stationery gifts for friends after visiting Japan and they always love it. It’s got that ‘wow’ factor about it.”

Takashi Ohshima, product purchaser for Tokyu Hands, a major department store with chains throughout Japan, said Japanese stationery goods distinguish themselves in quality, good design and diversity. But the utmost separating factor might be the “second story” associated with Omoshiroi Block notepad, with Ohshima saying that the notepad’s secondary story element being, “the idea that the object emerges only after using it.”

The success behind Japanese stationery, says Yuberley Aponte, one of the designers of Omoshiroi Block, is that “they are made with a deep commitment to users and their feelings in mind.” 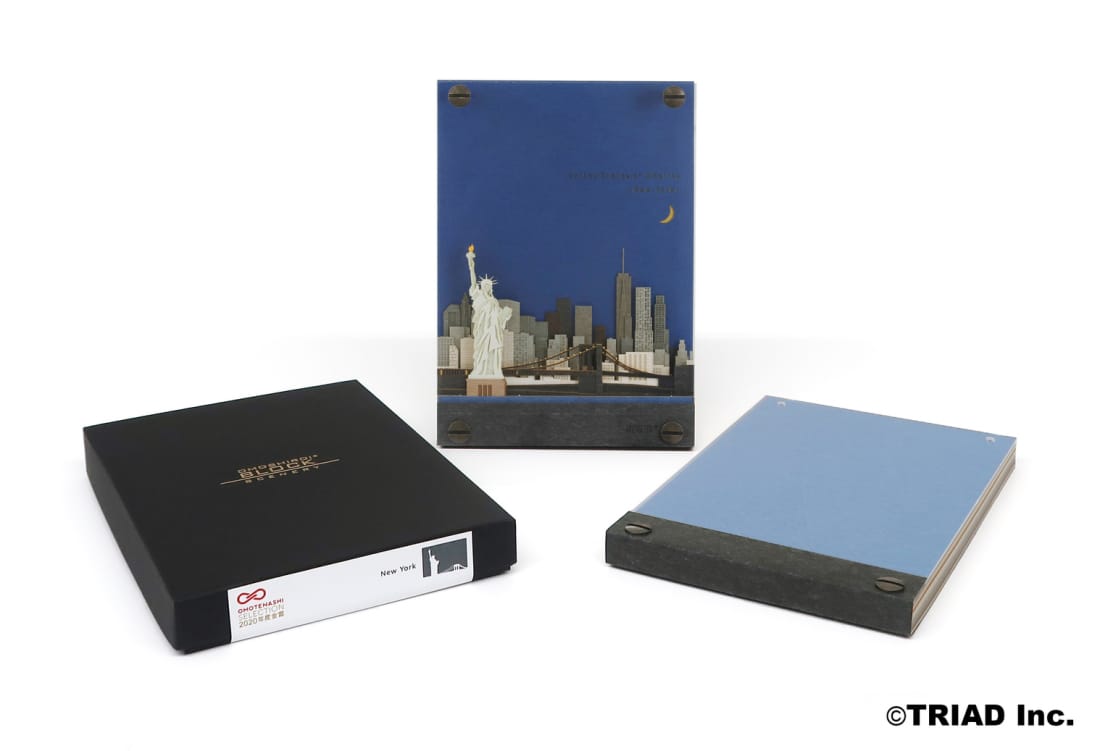 This thought process is imbued in every piece of paper and may shine, especially in times of a global pandemic. For those who are unable to venture out or go home, the New York skyline or the streets of Paris can be an unlikely remedy for the heart.

Aponte says the initial concept for Omoshiroi Block was a product that reminded people of their travels, but due to the ongoing novel coronavirus pandemic, “the world is changing.”

No End to the Magic in Sight Triad has been extending its Omoshiroi product line to include a note-taking paper shaped like a flower where users can tear off flower petals for notes and messages, annual and weekly calendars featuring world travel and the Oriental Zodiac, and new shapes like Doraemon and the Umeda Sky Building.

The company also recognizes it can push the boundaries of imagination and take people to destinations that are not of this world. We will have to see what the wizards at Triad can conjure in 2021.

Find a complete range of products at the Omoshiroi Online Store.