Is 'Yume Lion Dreams' an instant classic or is pop artist Takashi Murakami just looking to make a quick buck?

Reading books together creates one of the most important bonds between a parent and a child. It helps children develop language. It stimulates imagination and curiosity. It creates memories. As our kids grow older, us parents hold on to children’s books hoping to pass them on to future generations. Simply picking up the old, worn-with-love favorites makes one burst with nostalgia – and sometimes tears (looking at you, Goodnight Moon).

As a parent raising two small children (ages 3 and 5) in Tokyo, I get giddy when I am able to introduce the American authors that enriched my childhood, such as Dr. Seuss and Maurice Sendak. Meanwhile, titles such as The Very Hungry Caterpillar and The Little House have been translated in Japanese, allowing me to practice hiragana and katakana while reading to my children.

Parenting tip: Nothing puts children to sleep better than stuttering through The Ugly Duckling in a foreign language. 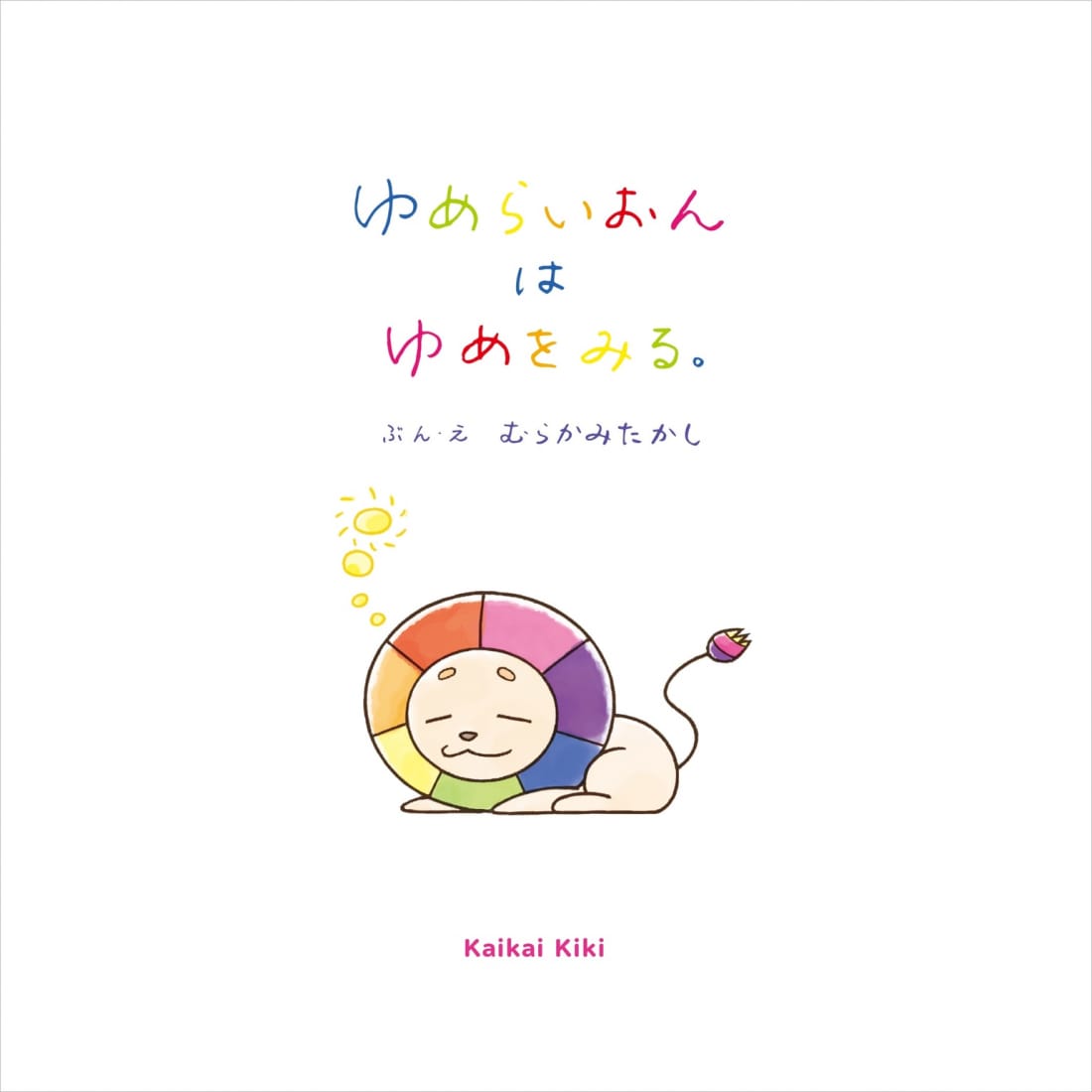 Kids being finicky creatures, some books don’t take. My kids had no interest the first time I tried to read The Cat in the Hat. They still really don’t care if your mama is a llama.

So when I was provided a copy of Takashi Murakami’s first children’s book, Yume Lion Dreams (ゆめらいおんはゆめをみる), I decided to let my children be the judge. The pop artist made his fame in America with collaborations with Louis Vuitton and Virgil Abloh and his ostentatious and risqué installation is currently on display as part of the STARS: Six Contemporary Artists from Japan to the World exhibition at Mori Art Museum.

Yume Lion Dreams is published by Kaikai Kiki Co., Ltd. – the company Murakami set up to operate and facilitate his multiple creative outputs, with such activities including a production company, a café and gallery, a CG animation studio and more.

The release of Yume Lion Dreams makes you wonder if Murakami, whose work is influenced by manga and anime, is reaching for creative inspiration further back in his childhood, or if he is simply looking to make a quick buck after announcing this summer that Kaikai Kiki is on the verge of bankruptcy due to Covid-19.

I love this! Thank you for report about me. @artnet

Murakami’s artistic philosophy of superflat after all does not distinguish between the artistic merits of commercial work and the ikuyo-e works of Japan’s masters, and Murakami has no qualms with licensing his work to the likes of Uniqlo T-shirts and cans of Frisk mints.

So to properly evaluate the quality of Yume Lion Dreams, I gave the book to the only two people in the world who refuse to eat my homemade macaroni and cheese – my children.

By page eight – when the sleeping lion starts blowing snot bubbles – they were laughing out loud. At the book’s conclusion, they were clamoring for me to read it again. Yume Lion Dreams passes muster.

Who is Yume Lion? 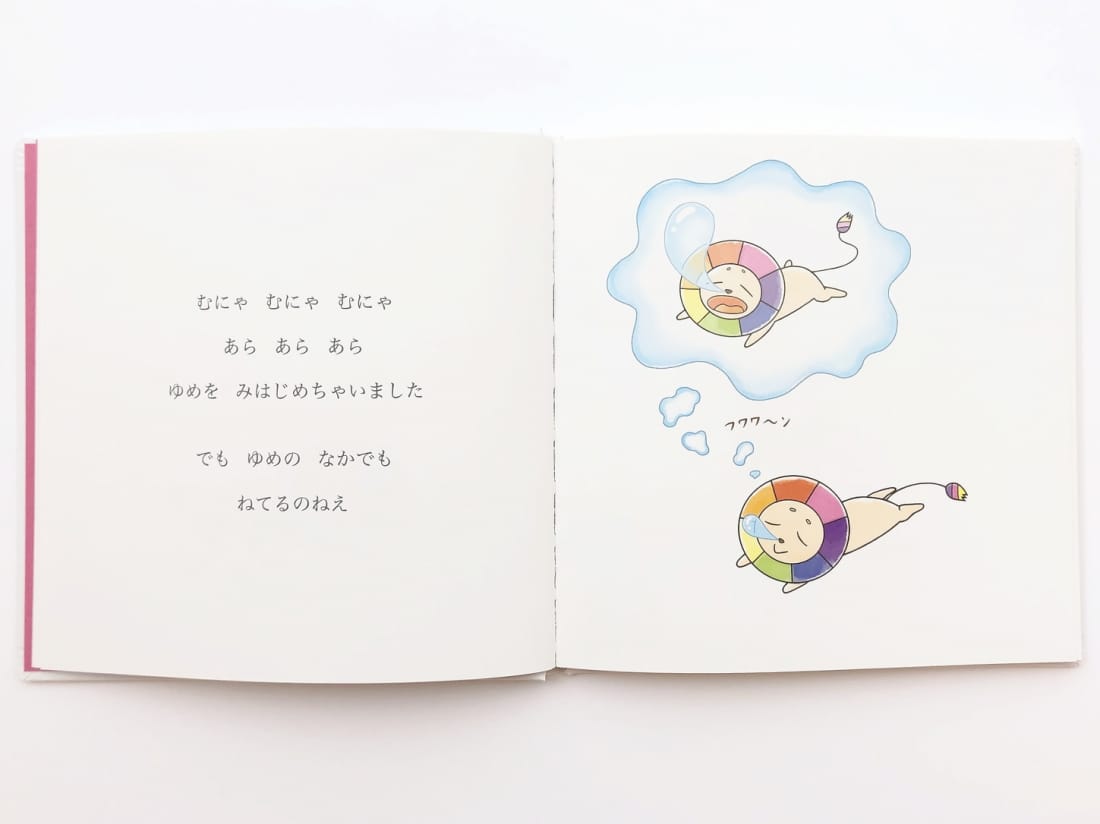 Yume Lion (The Dream Lion) is a familiar character created by Murakami that has appeared as a gold and aluminum statue on the front stoop of the Palace of Versailles, is seen most commonly as a plush toy, and has even appeared as a live mascot. Perhaps it was a matter of time before the sleepy cat had his own children’s book.

The book chronicles the lion’s vivid dreams and the characters he encounters, evoking surprise and whimsy. According to Kaikai Kiki’s press release, Murakami says Yume Lion “radiates his colorful dream and brightens everyone around him with the cute, peaceful colors.”

The lion reminds me of the Japanese children’s book character Nontan, the adorable cat whose naivete and underlying self-absorption can lead to consternation amongst his friends, but ultimately his big heart and je ne sais quoi brings everybody together. These same qualities prevail throughout Doraemon – a common muse for Murakami.

The artwork for Yume Lion Dreams is of course stunning. Murakami seamlessly blends pop art watercolors with his classic training and deep interests in Japanese culture and mythology – with distinct yokai making a guest appearance in Yume Lion’s dream.

While the story is lacking in a moral message common to Western children’s books, the story develops with an array of onomatopoeic words that describe Yume Lion’s changing expressions. The true emotions pop from the typography. Murakami spent part of his summer working on calligraphy in Kyoto, and this rediscovered passion is reflected in Yume Lion Dreams as each hiragana and katakana character emotes each of the lion’s existential predicaments.

Should You Buy Yume Lion Dreams?

Yume Lion Dreams won’t become a permanent classic. It is lacking in the dilemmas – physical and moral – as well as sense of fellowship that drive the children’s books that line bookshelves of playrooms across the world. Also, it is only available in Japanese. The simple, fun language is helpful for parents trying learn Japanese along with their kids, but is pretty much useless for non-Japanese speakers. As Murakami writes on his Instagram, “Excuse me, everyone in the English-speaking world.”

We published a picture book for 1 to 5 years old. Only Japanese, though. Excuse me, everyone in the English-speaking world.

Ultimately, this is a book worth adding to the collection. My favorite part is the end. As a parent, I appreciate children’s books where the character falls asleep on the last page, as I hope it encourages my children to do the same.

Except for when they demand for you to read the book again.

Yume Lion Dreams is available for sale on Amazon for the listed price of ¥1,320 (as of article publication)