Nintendo has become a global phenomenon, but it wasn’t always that way. When they entered the Western video game market in the early 1980s, it was seen as a risky move. By 1990, 30% of American households owned a Nintendo Entertainment System. That’s an incredible figure and a testament to Nintendo’s modern appeal, but the history of the company goes back far beyond video games. For fans of games and history alike, the backstreets of Kyoto offer a glimpse of the humble origins of Nintendo. 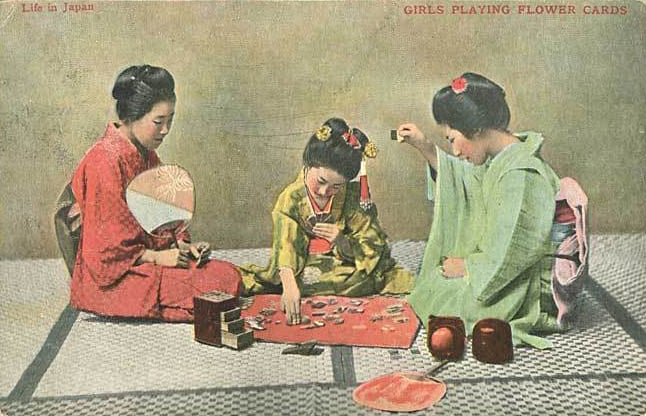 It all began with playing cards. Nintendo established their headquarters in eastern Kyoto in 1889, near the banks of the Kamo River. Nintendo’s founder, Fusajiro Yamauchi, was seeking to capitalize on the rising popularity of card games, long since looked down upon during the Edo Period for their connection to gambling. In the late 1800s, as the Meiji Emperor sought to westernize Japan, European trends became popular and old restrictions on gambling were lifted. Yamauchi knew an opportunity when he saw it. The original Nintendo cards were called hanafuda, flower cards. With a strict attention to detail, all of the cards were hand-painted on mulberry wood pulp. The hanafuda decks were comprised of 12 suits of flower prints, each representing nature in a month of the calendar. The game of hanafuda is a progressive matching game similar to Go Fish or Crazy Eights, with certain cards featuring a bird or special image that would be worth extra points. Looking at the rules, it doesn’t seem that complex (or exciting) to a modern eye, but in the olden days – before Mario – it was considered an engaging way to pass time. Yamauchi was an interesting guy. Before the card business heated up, his last name was Fukui and he was involved with providing cement for the Lake Biwa Canal project began in 1885. This tunnel under the mountains connected Japan’s largest lake to Kyoto. The massive project provided drinking water and an industrial boost that the city desperately needed after it lost its capital status to Tokyo in 1868. Fukui’s business sense proved so adept that his boss adopted him and brought him into the family concrete business. He became Yamauchi and used his new access to the family fortune to try his hand at making playing cards. He ran both companies in tandem for years, and the Kyoto concrete business is still run by a fifth generation Yamauchi today. 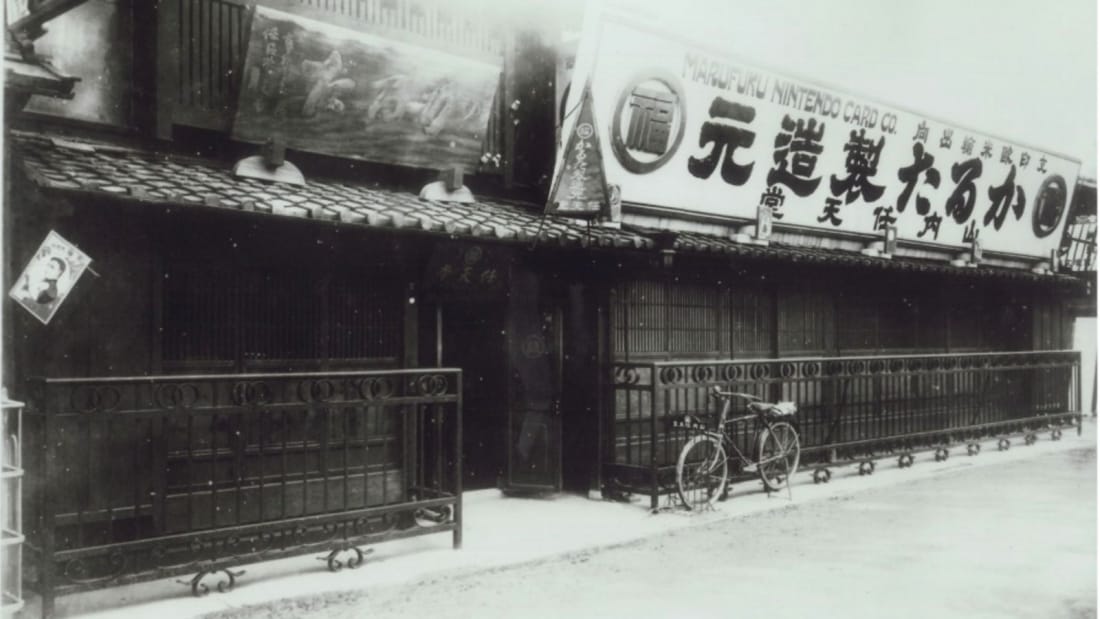 In 2017, the city of Kyoto shared an old photo it discovered in its archives: the original Nintendo headquarters on Shomen Dori Street in 1889. You can see the gleaming white sign of Nintendo Playing Card Co. on the right, and an older faded wood sign labeled “karuta” in Japanese letters on the left. Karuta was another traditional Japanese card game that was made by Nintendo at the time.

Nintendo soon expanded its repertoire to include other cards games and the black and red Western-style playing cards that we all recognize. There’s been some debate over the exact date that Nintendo first started printing Western playing cards. Legend has it that they began manufacturing these cards to entertain – and keep docile – the Russian prisoners of war during the Russo-Japanese War in 1904-05, but Nintendo playing cards were recently discovered in a US museum with a date of 1903. We may never know exactly when this transition to Western cards took place. The popularity of cards in Japan exploded as the fervor for Western fads and trends snowballed in the newly internationalized Japan at the turn of the century. But how did Nintendo ensure that the popularity of their cards would continue to grow? Here’s the key to Nintendo’s success the English language sources on Nintendo’s history seem to conveniently leave out: tobacco. Yamauchi partnered with Yoshihiro “Tobacco King” Murai to ignite his card brand. Each pack of cigarettes contained a single card from the hanafuda deck. Nintendo fans were collecting tobacco wrappers long before they were collecting Pokemon.

Moving On Up to the East Side of Kyoto By 1933, Nintendo needed a larger space to manufacture and distribute its playing cards, so the old wooden building on Shomen Dori was replaced by a modern structure. The concrete was provided by the original Yamauchi company, naturally. You can still see this old headquarters today, in a quiet neighborhood near Kyoto Station. Unfortunately, the building’s first floor is often closed up with windows covered and doors locked tight, but occasionally an interior curtain will be ajar allowing for a peek inside. The lobby is early Showa Era architecture with muted hints of early Art Deco, all in immaculate condition. This entryway hints at the architectural treasures locked away inside. So sad that one of the best preserved buildings from this period in Kyoto remains out of public view. It was in the 1933 building that Nintendo became the powerhouse of entertainment that we know it as today. In the 1950s, Yamauchi’s grandson obtained the rights to put Disney characters on the company’s playing cards, which was essentially a license to print money. Thanks to the magic of Disney, playing cards were no longer seen as a gambler’s accessory and they became family entertainment. It was this huge success that pushed Nintendo to try its luck in new markets like taxis, love hotels, toys and even drum machines and instant rice. They had their hits and their flops, but it wasn’t until the late 1970s that they struck gold with the handheld electronic gadgets that became the video games that many of us grew up with a decade later. In fact, one of Nintendo’s little known first game hits was the Game & Watch title “Mario’s Cement Factory.” Talk about paying homage to your own history.

Where Nintendo All Started There are two small plaques on the front of the building with the company name. If you look carefully, you’ll also see the word “Napoleon.” The French general was the face of Nintendo for many years, and was featured on their “Presidential” line of cards (even though he was technically an emperor). You can still find the Napoleon cards for sale at toy shops today.

The old headquarters is longer in use. Nintendo has moved to the southern end of the city and maintains two huge white (despairingly drab) office blocks, as well as a variety of (equally uninspiring) smaller satellite buildings throughout the area. The historic Shomen Dori enclave was slated to reopen in April 2021 as a luxury boutique hotel, but the pandemic has put a halt to those plans. The company overseeing the project says the opening has been postponed indefinitely. Like the rest of Kyoto, the old building quietly holds its breath until tourism returns in the unknown future. If you’d like to visit the old Nintendo headquarters, it’s only a 10 minute walk northeast of Kyoto Station. The building is on the north side of Shomen Dori between the Kamo River and Shosei-en Garden. You can find it easily on Google Maps by searching “山内任天堂 / Yamauchi Nintendo.” For diehard Nintendo fans, this can be a fun pilgrimage to the spot where it all started over a hundred years ago. Visitors have left some Mario stickers on a sign pole in acknowledgement of the history here, but please don’t damage the site with further decoration or graffiti. 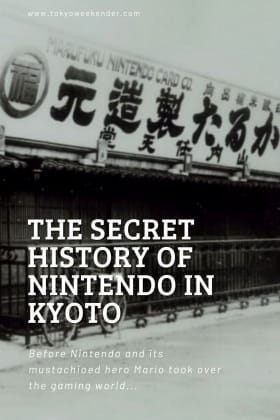