Bokksu: The Sweetest Subscription Box You’ll Ever Receive from Japan

Love Japanese snacks? Then you’ll love Bokksu, the company delivering a serving of this sweet tradition to doorsteps around the globe

Just as kawaii culture took the world by storm, Japanese cuisine, sweets and snacks have become increasingly in demand overseas. Founded in 2016, Bokksu (named after the Japanese pronunciation of “box”) is a subscription delivery service offering monthly or one-off selections of Japanese snacks, candy and tea. The company takes great pride in sourcing and curating its contents, with a colorful lineup of themed boxes offering an authentic slice of Japan, from local makers and regional specialities, to the latest snack trends and newest flavors.

Bokksu recently released Snack Bites: Stories of Craft, Culture & Cravings in Japan, a five-part mini-documentary series produced by photographer and filmmaker Bon Duke, introducing a handful of artisan makers across the country who are producing an array of delicious treats. The short films are not only visually delicious but also capture the fascinating and inspiring human stories at the root of the business. Beyond surface-level sugar and spice, Bokksu is successfully striving to bridge the gap between remote and historic independent makers and hungry consumers worldwide.

We spoke with Bokksu founder and CEO Danny Taing to find out more about his global snack delivery empire and discover some of his tastiest recommendations. Why did you decide to start Bokksu?

I lived and worked in Japan for several years before starting Bokksu. During that time I really enjoyed discovering and eating as many authentic snack foods as I could find, so when I moved home to NYC I brought back an entire suitcase of them. I shared them with my friends and when I ran out I realized I couldn’t find those same snacks anywhere. Japanese snacks that feature regional ingredients or are made by small family-run shops that don’t sell overseas, there is a wide world of snack makers crafting both traditional and innovative snacks… and outside of Japan, there are many people who want to access them. I realized there was an exciting opportunity to create a new service to help bridge that need. Why do you think Japanese snacks are so appealing to customers all over the world?

I believe it’s because Japanese snacks are so adventurous. There’s a huge variety in shape, flavor, color and texture; the sky’s the limit. In the West, I think it’s pretty common that there are a few standard flavors for things like chips and cookies, but in Japan “snacks” is a much broader category that also incorporates a lot of unique flavors based on seasonality and regionality. A lot of importance is placed on eating fresh local produce in season when possible, and this philosophy also applies to their snacks. In spring, you can enjoy cherry blossom snacks that aren’t available at other times of year. And certain prefectures are known for certain ingredients like Okinawa’s famous kokuto black sugar.

So not only can you taste new flavors, but it’s also an opportunity to connect with a culture that is rich in history and craftsmanship. How do you select the snacks for your boxes?

In the beginning, I personally contacted the makers and curated the snacks myself after trying all the samples. Nowadays, we have an incredible team that cultivates and deepens our relationships with makers all across Japan. They discover the best snacks and then curate them into themes for our future boxes. To this day, my team and I still gather around to taste every snack sample before it can be greenlighted to go into a box. It’s really important to us that we only include snacks we ourselves love, so we never put anything into our box that hasn’t been tasted by someone on our team. Snack Bites is a project I’ve been dreaming about since I started Bokksu. From the first time I met with a maker and heard their story, I was amazed by their dedication to their craft and their strong desire to continue their family legacy. I knew then that our customers would also love to hear these same stories. With packaged snacks, it’s not easy to tell when something is handmade or whether it came from a large corporation or a family-owned shop. But to us, we realized these makers are a large part of what makes our box special, and we wanted to find a way to share their stories with our community and bring the spotlight onto them.

What did you learn from visiting the companies for the series?

The most inspiring trait shared amongst the makers I met was their belief in continually perfecting their craft, even at the cost of growth and expansion. The perfect example is when I asked Daimonji Ame Honpo, a century-old Kyoto candy shop, about why they haven’t grown beyond their team size of 10 since they first started in 1921. They responded that rather than quickly grow and risk overextending, it was more important for them to steadily continue their family legacy by handcrafting the high-quality hard candies their long-term customers have come to expect. This philosophy of consistent quality was refreshing when compared to the common American startup mindset of growth at all costs until you either boom or bust.

Do you think traditional manufacturing processes and small family businesses can continue to survive?

It’s honestly been tough for our small family makers because of how fast the world is changing – even more so now due to the recent global climate. Most of them have only sold domestically in Japan, don’t understand e-commerce, and don’t speak English. However, the international demand for their artisanal food products is only going up as interest in Japanese culture and food has been on a meteoric rise for the past couple of decades. This is where Bokksu comes in…

What’s next for Bokksu?

Though Bokksu started as a snack subscription box company and that will always be the core of our business, our mission of bridging people around the world through authentic food and media can also be achieved through other channels. Since Snack Bites received such positive feedback, we plan to continue developing more original video content for our worldwide Bokksu community. Once global supply chains stabilize, we will proceed with a couple of expansion projects that we’ve been working on for a while now: Tea Bokksu and Umami Bokksu, a ramen and savory food box.

What’s your favorite snack at the moment?

My favorite recent snack is called White Strawberry, which is the world’s only white chocolate-infused dried strawberry. Instead of being covered in white chocolate, each strawberry has had its water content entirely replaced with liquid white chocolate, resulting in crunchy, tart and smoothly sweet flavors with every bite.

To watch the documentary series Snack Bites: Stories of Craft, Culture & Cravings in Japan, and order your first box, go to www.bokksu.com 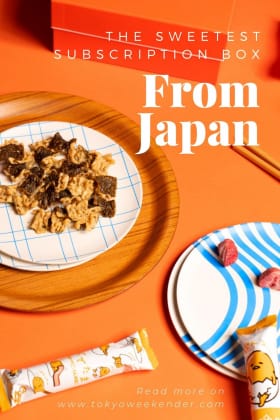