Over the hills and far up north you’ll find a spot quite unlike anywhere else in Japan with more similarities to the fantasy town of Hobbiton than Japan’s fast-paced cities. Furano: a quaint destination in the middle of Hokkaido renowned for its rolling lavender fields and encircling mountain peaks. Farm Tomita is nestled in the Furano countryside and is home to over 100 flower varieties. Every July, thousands flock to Farm Tomita’s fields to experience the aromatic smells and captivating colors of rotund marigolds, fragrant peppermints, poppies, and of course, the blossoming lavender.

To plead ignorance, I thought there was only one type of lavender – the purple kind. In fact, Farm Tomita alone cultivates five: Noshi Hayazaki, Yotei, Hanamoiwa, Okamurasaki and Lavandin. Their subtle differences in size and shade truly display the range of the color purple.

Dotted around the edge of the cotton candy fields are an abundance of handicraft stores and sweet stalls. To complement the view, I scoffed down a citrusy lavender ice-cream cone and finished it off with a juicy, fresh melon slice.

Perfumes. Soaps. Wines. The farm has any souvenir your heart could desire and all branded with that unmistakable aroma. Following on from this theme, while acknowledging our current global situation, they have implemented alcohol spray scented with a hint of… you guessed it: lavender. Adventure onto the Rollercoaster Road, named for its thrilling ups and downs, to the neighbouring scenic hills of Biei. At the top of the “ride” you can see the Tokachi Mountains looking down on the famous patchwork lands below.

A great way to absorb the panoramic view of Biei is to visit the gardens of Shikisai-no-Oka. Here you can live a true rustic lifestyle with a hoard of unique activities, including jumping on a tractor bus or renting a cart to drive around the grounds. In winter, once the snow envelops the countryside, carts are replaced by snowmobiles.

The food is equally memorable. Take advantage of being surrounded by potato farms and stuff your face with their locally sourced croquettes. But Furano and Biei do not just have breathtaking landscapes to offer, they also host other incredible natural and unnatural phenomena. One such find is the Shirogane Blue Pond.

Created to stem the flow of volcanic mudslides, its aquamarine color is thought to be completely accidental, caused by aluminium deposits left behind during construction. The barrier of bare slender trees all stand to attention in this mysterious lagoon.

Follow the translucent water upstream, and you’ll find Shirahige (Whitebeard) falls: named not after a pirate but the likeness it has to an old man’s aging beard. Unusual for a Japanese waterfall, its source comes from an underground river and trickles out through cracks in the jagged rocks. No matter if it’s by train, car, bus or bicycle, one of the most important things you must do is explore. All seasons fit this landscape to a T, but summer obtains the added benefit of clear skies and cool winds that make it perfect for drive-by viewing. The undulating roads can be strenuous, especially if you decide to rent a bike, but rest stops with expansive barley fields swaying like waves are plentiful.

The railway is a viable option for nearby places, particularly Farm Tomita. In the summer, a special Furano-Biei Norokko-go train runs often between Furano and Biei. A notable choice for train buffs. While summer remains the perfect choice for flower lovers. All seasons offer something special for adventurous tourists. Be it cherry blossom viewing in May from the picturesque viewpoint of Asahigaoka Park or fall nature rafting on the Sorachi River that runs through Furano.

As the temperature drops and white powder falls in droves, the skiing season starts. The Furano ropeway is open all year but comes to life when eager skiers ascend ready to rip up the slopes.

From June to August, JR Hokkaido operates a limited direct express train (aptly named the Lavender Express) from Sapporo to Furano that takes about two hours. It’s designed mainly for day-trippers from Sapporo so runs sparingly. Alternatively, you can fly into Asahikawa Airport and hop on a train or bus to Furano in around an hour. Preferable but more expensive. 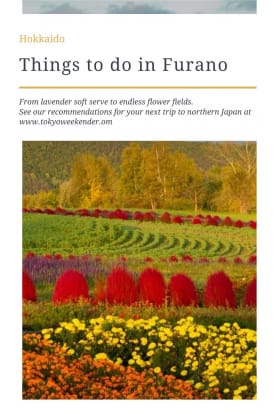 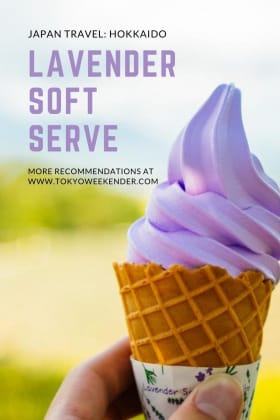 TAGS: Hokkaido
The Best 70 Things To Do in Hokkaido, Tried and Tested →