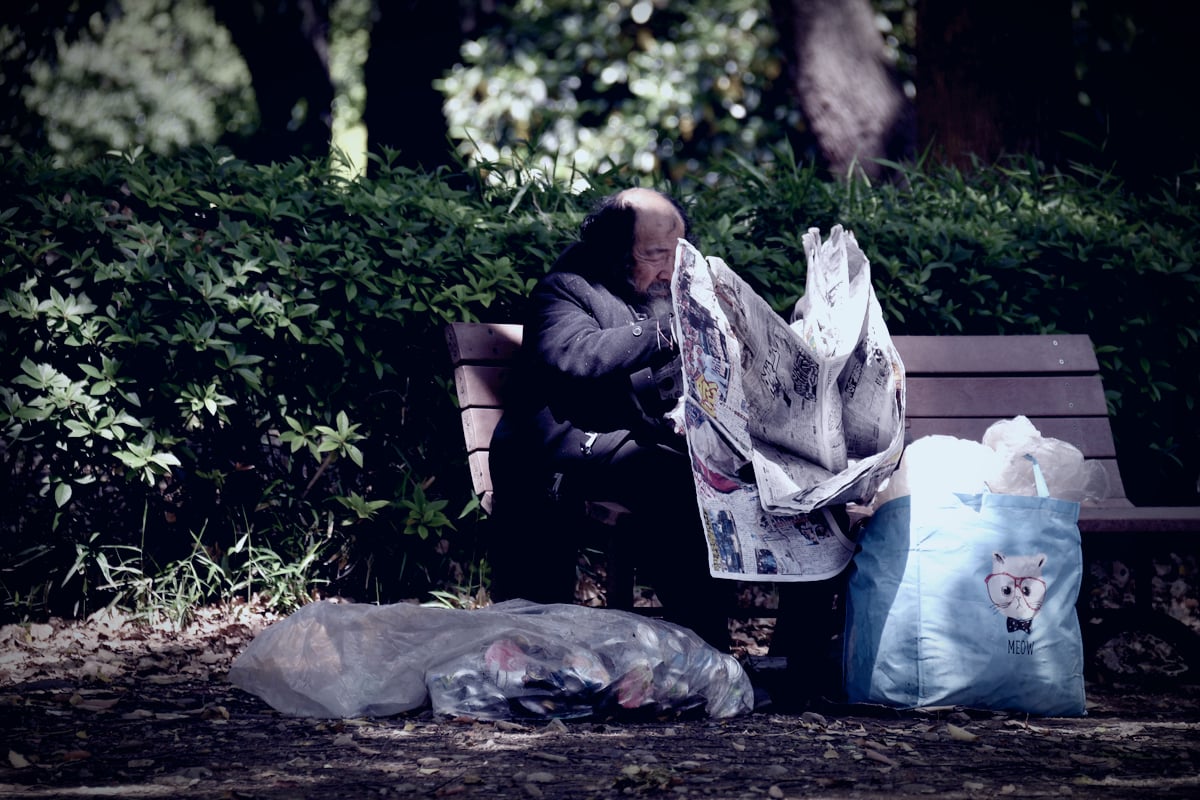 Covid-19, 2020. If that were a book, there wouldn’t be a person living today who wouldn’t have a chapter to add to it. We have all been affected by it. We have all feared it. And we have all wished it was a nightmare we would wake up from without the sweat and the bad memories of it. But while we’re all struggling with the insecurity, fear, loneliness, and economic concerns amid the pandemic, its impact on individuals in difficult social and economic situations is far harder.

This April, Prime Minister Shinzo Abe’s government announced that they’d be making a one-time ¥100,000 cash payment to every resident of Japan who is officially registered at a Japanese municipality as of April 27, 2020. The system was designed to help alleviate some of the economic pressure caused by the spread of the coronavirus. However, experts argue that the bureaucracy of the plan and its ill-throughout rollout may negatively affect Japan’s most vulnerable, including the country’s 4,555 homeless, manga cafe refugees, and victims of domestic violence.

“The proposed procedures for receiving the benefit are based on lack of understanding of low income and marginalized people.”

Homelessness in Japan covers a multitude of different living situations. There’s those doing it rough on the streets, and there are the internet cafe refugees — individuals who rent a space in an internet cafe (or manga kissa in Japanese) who technically also fall under the homeless umbrella, given the fact they have no fixed address.

Someone who knows all too well about the bureaucratic hurdles and social barriers to surviving homelessness in Japan is Mago Yoshihira, a campaigner for social equality. Yoshihira is the key figure behind YUI Associates, a social project that through accommodation, and social integration initiatives, helps support those struggling to find stable housing situations in Tokyo. YUI is based in an area once known as Sanya, in Kiyokawa in the city’s Taito Ward.

We spoke with Yoshihira to find out how the ¥100,000 payment process will play out for the country’s most vulnerable — the homeless, those in unstable housing conditions and those suffering from tumultuous domestic living situations. There was one clear initiative on her mind: while the government’s ¥100,000 stimulus payment is a start and a far more reasonable offer than the previously proposed ¥300,000 payment to those who lost over 50% of their income, Yoshihira believes the distribution process may put some potential recipients at risk.

The trouble for internet cafe refugees

For internet cafe refugees, around 4,000 who live in the city’s ubiquitous manga cafes — many of which have shut down amid the virus — the pay is “very beneficial,” Yoshihira says. “However, the mail will go to the address they registered, and it could be really far from where they’re currently living.”

How collecting the payment could be a health risk

“People are not supposed to move under the emergency declaration,” Yoshihira says, and for many, especially those who move to Tokyo to find employment, their address may be linked to somewhere far away, making the journey a potential health risk. This factor doesn’t include the fact that “people will be crammed up to a welfare office, and possible infection clusters could emerge.”

“As for the formerly homeless individuals and also now welfare recipients in Sanya, it would be very beneficial for them,” says Yoshihira, her main concern though is those residents who battle with addiction.

“Policymakers and researchers should come to the fields and talk to the people without prejudices against them.”

“Quite a few people [in Sanya] are addicted to gambling, usually pachinko.” If the business restrictions are lifted too early, she suspects that pachinko places would get more crowded after the stimulus payment takes place. “I fear it could lead to the second wave of COVID-19 infection or infection clusters.”

While the government’s efforts to offer respite during these trying times should be acknowledged, Yoshihira believes that the way it was exercised illustrates LDP’s disconnect from the people it’s meant to represent.

Yoshihira further highlights that Abe’s choice of method of payment could be problematic for some people, “in households with the threat of domestic violence,” she says. “Because [the system is] based on the Japanese Family Register System, it underlines the government’s paternalistic way of thinking.” This registration system is a system based on the head of the household, which in family situations and partnerships in Japan is still most often the man.

Recently, however, the Ministry of Internal Affairs and Communication established a rule to provide financial benefit to a person living separately due to domestic violence. “So, if they apply, they can receive it along with the information where they reside,” explains Yoshihira. “However, if there’s a case of the head of the family already receiving the benefit instead of the individual, how the receiver will reimburse the money is still undecided.”

In other words, if the head of the household applies for the payments for all of the individuals registered under that address before the individuals apply using their residence card, he will get the cash.

“The proposed procedures for receiving the benefit are based on lack of understanding of low income and marginalized people,” says Yoshihira. “The recent Abe administration and LDP consist of too many hereditary legislators. They have become aristocrats, too far removed from common people.”

The result is ill-conceived policies — like the Abenomask situation — built on trying to look like they’re doing something but perhaps causing more harm than good, Yoshihira argues. “They should have taken those problems into consideration before the announcement,” she says. “This kind of bewilderment shows the government’s lack of imagination due to how they are far away from the actual fields.” Yoshihira says from her perspective on the streets in Sanya that it is “too late to think of an effective solution to the COVID-19 infection situation.” But she invites those in making the decisions to see in the flesh just who they affect the most.

“One solution I can think of for the long term is that policymakers and researchers should come to the fields and talk to the people without prejudices against them.”

When coming up with socially impactful decisions, she suggests, the government “should at least try to list examples of cases such as a battered woman/man, poor elderly couples and individuals, a single mother and children, and homeless individuals.” Because all too often in situations like these, those who have the smallest voices carry the biggest burdens.

Top image by Meeh on Shutterstock