If Yosh Morita could tell his 20-year-old self anything, it would be to survive and keep surviving.

“Life in the music industry isn’t a fantasy, it’s as real as the passion you have for music,” he says. And Morita’s passion checks out: this bilingual Tokyoite lives, breathes and eats music. Every waking hour is spent involved with music in some way, whether it’s consulting, writing lyrics or composing. He’s most well-known for his role as vocalist for Survive Said the Prophet (often shortened to SSTP or Sabapuro), an international rock band that has had serious success both domestically and abroad. SSTP penned the opening theme songs for hit anime series Banana Fish and Vinland Saga as well as the drama show Mushikago no Jyomae. The band has also performed at most of Japan’s major music festivals. Morita has also collaborated with pianist Hiroyuki Sawano, but most of his work is behind the scenes, offering English consulting and songwriting services to Japanese artists and bands across the industry.

His latest musical project is a whopper: he was handpicked by world-renowned composer Nobuo Uematsu to be the voice for “Hollow,” the theme song for the game Final Fantasy VII Remake. It’s the latest installment of Square Enix’s mega Final Fantasy franchise and was released on April 10 on PlayStation 4. “When I played music people turned their heads and started listening to me. That was my way of expressing my frustration and my sadness”

Since music takes up so much of your life, we can’t help but ask: why music?

You know, I find myself asking this question a lot more recently and I really appreciate the fact that you asked that. I think that communication is the key to success. But people accept communication in so many ways now and I’ve never had anything but music to communicate well in. And what I mean by well is that I wasn’t a good singer, I wasn’t a good songwriter, but when I played music people turned their heads and started listening to me. That was my way of expressing my frustration and my sadness. Because people expected me – even from grade school – to take shit and be okay with it. I was put in the middle of so many transitions in life and music was the only thing [through which] I could just say, “Here’s how I feel, take it how you will” and it felt good every time I did it. So, why music? Essentially, it’s a way to stay alive for me.

But it’s a tough industry, right?

Sure, but I think something I’ve learned to overcome – and I think anyone would if they wanted to pursue something they wanted to do – is these hurdles and barriers that people put in your life. If you want to break the rules, you learn the rules. If passion doesn’t drive you to break the wall or climb over the wall, then you never had that passion in the first place.

Tell us more about your involvement with the FFVII Remake project.

People don’t know about it, but I’ve done game music for a while through part-time jobs for commercials, games, pachinko and slot machines. Games aren’t something new for me, but it’s the first time I’ve been recognized for it. It was a huge step up. I mean it’s a historical game. And Uematsu-san came to several [SSTP] shows from what I understand. I didn’t even know he was there; I didn’t recognize him. We went to some random Tokyo island – Hachijojima I think it was – for a show and I remember this old man with long white hair coming up to me and saying, “Great show, dude.” I was like, “Thanks, dude?” Little did I know he was there to pick me for what may potentially be his last project. I don’t know that for sure of course, but it does seem like he’s making this a significant chapter in his life. “That’s the coolest thing to see in the music industry: someone who can keep their humanity and leave such a mark on the history of music”

What’s it like working with someone who is considered to be a legend in the game and music industry?

Uematsu-san is quite the human being. Like, there’s no other way to describe him. When you talk about music, he’ll listen to you. When you start talking to him about your passion – like, I’m 30 years old and I’ve done nothing compared to his career – but he’ll sit there and listen. That’s the coolest thing to see in the music industry: someone who can keep their humanity and leave such a mark on the history of music in Japan.

What, outside of your musical endeavors, feeds your creativity? How does this contribute to your music?

I cook now more than ever. It’s quite similar to making music to me. I miss Mexican food a lot, so I find myself making Mexican haystack, tacos, burritos, guacamole, but I have my own little menus I make here and there. I’ll cook anything, but if we’re talking specialties, carbonara would be it for me. And egg in a hole – you know, where you put an egg in the hole of your toast? I’m also really good with leftovers. Besides that, I’m all about music all day and every day.

What’s your favorite song on SSTP’s latest release, Inside Your Head?

I love all the songs the same, but if I had to pick a song, “Last Dance Lullaby” would be the most memorable one for me. I wrote this song when I was 16, and it brings back good memories of my teenage years about the girl that got away. [Laughs]

Survive Said the Prophet’s latest album, Inside Your Head, is available on iTunes for ¥2,139. Morita spends a lot of time on the road, so when he’s not cooking, he’s enjoying some of Japan’s best fare…

Wanaka, Osaka
“If you’re in Osaka, this is a must.”
takoyaki-wanaka.com 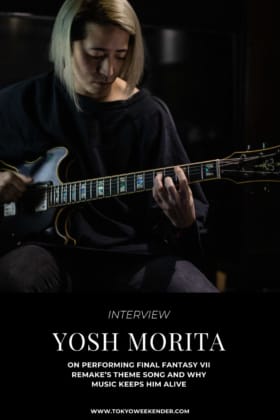